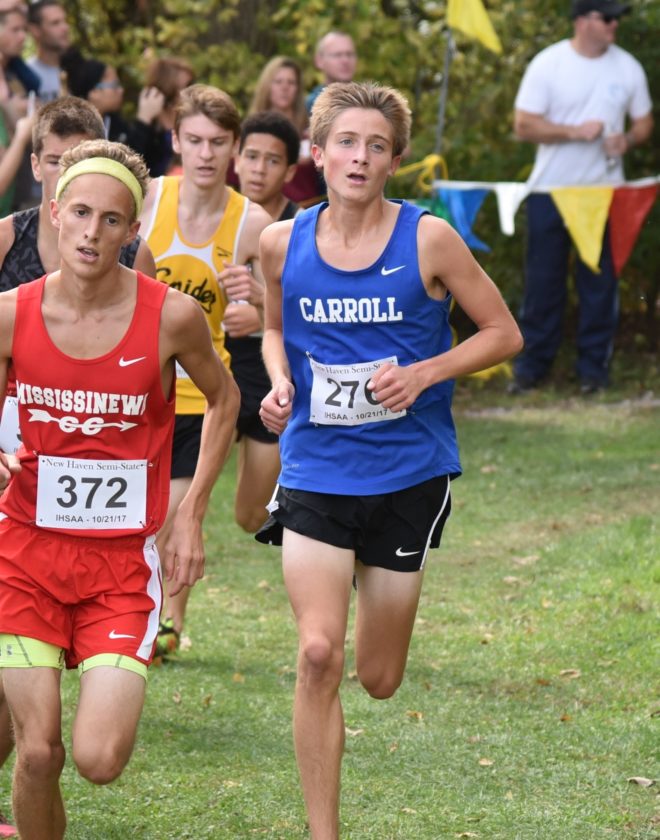 From the start of the cross country season to the state meet, Goetz delivered a consistent – and consistently strong – performance for the always competitive Chargers.

“He was the epitome of consistency all season,” Carroll coach David Brooks said.

That consistency was reflected in Goetz’s times, as he always ran under 16 minutes in the 5,000-meter race, delivering his best race on a tough course at the state finals. But it was also reflected in every other area of Goetz’s role as a student-athlete.

He was team captain, he’s in the running for salutatorian of the senior class and he was a positive force for the Chargers on a team hit by injuries throughout the season. For his high consistency of performance, capped by his Fort Wayne-area best 13th-place finish at state, Goetz is The News-Sentinel 2017 Boys Cross Country Runner of the Year.

It’s not just his coach who appreciates his commitment and approach: Goetz was named the IHSAA mental attitude winner at the state meet.

“I was pretty surprised by that,” Goetz said. “In years past, it was a lot more common for the champion of the race or someone in the Top 5 to get it. I was very happy with the way I performed individually, but I didn’t expect it.”

Brooks pointed to Goetz’s leadership as a key factor in Carroll finishing seventh in the state meet. The team, which won the state title in 2016, lost No. 1 runner Cole Powers to a stress fracture, and other runners fought nagging injuries, too.

“When Cole Powers went down in September, Connor really stepped up,” Brooks said. “He knows what he’s doing. He doesn’t let the conditions, whether cold or rain, affect him. He knows the competition and what they’ll try to do. His intelligence along with commitment made him successful.”

Goetz, who will study computer engineering and run at Oakland University next season, first played soccer as a young boy, then tried distance running later in elementary school. By eighth grade, Goetz chose cross country and track as his primary sports.

He was a key runner on the state title team a year ago, and improved his performance throughout this season. He won a sectional title, finished second at regional and third at semistate. Goetz’s time of 15 minutes, 44 seconds in the state meet race was his best of the season, other than a 15:11.7 at the Marion Invitational on a much faster course.

“It was tough to lose Cole this year and obviously some other guys had nagging injuries that went on all year,” Goetz said. “The way we ran at state, to clinch seventh place – I think we were ranked 14th coming in – was the best possible race for us.”

The fact Goetz finished his cross country career with the mental attitude award was fitting, Brooks said. Cross country, after all, is one of the most mentally challenging Indiana High School Athletic Association sports.

“I think he’s going to grow physically and at the college level, we’re talking 8K and 10K and those might suit his strengths even more,” Brooks said. “The longer you go, the more you rely on that consistent mental focus.”