Howard Greninger of the Tribune-Star 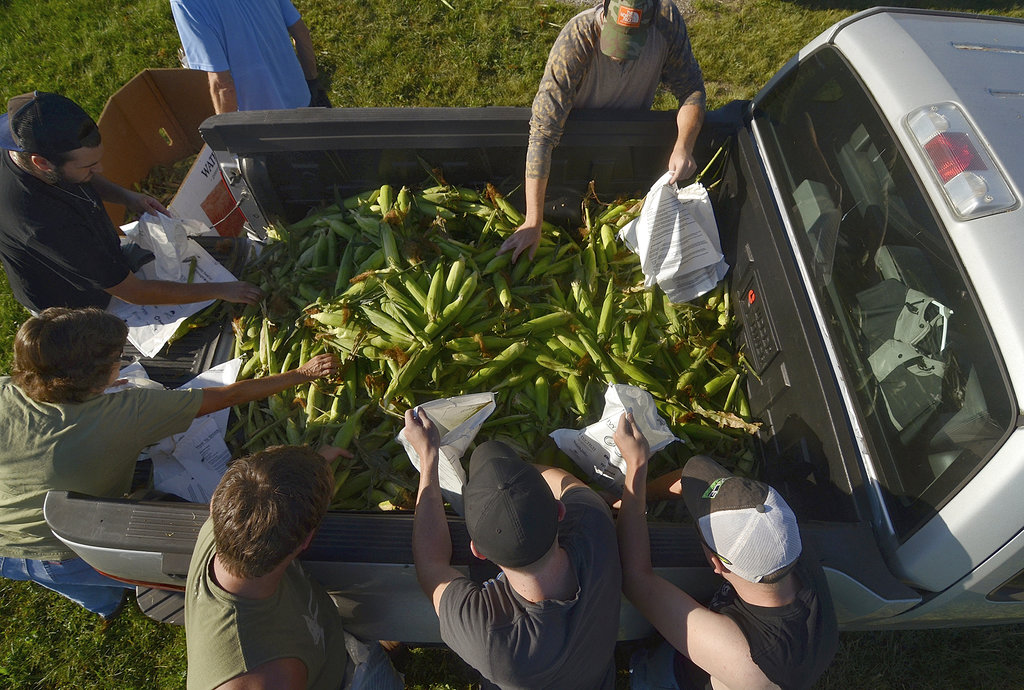 Volunteers and students from Ivy Tech Community College Wabash Valley grabs ears of corn that have just been harvested from a field along Davis Avenue in order to bag them on Wednesday, Sept. 5, 2018 in Terre Haute, Ind. The students helped harvest and bag corn for distribution to Catholic Charities Foodbank as well as several church food banks in Terre Haute and the Wabash Valley. (Joseph C. Garza/The Tribune-Star via AP)

TERRE HAUTE — With the bed of a pickup truck lined in sweet corn, Sydni Britton began filling a plastic bag.

Britton was among Ivy Tech agriculture and precision agriculture students who recently helped harvest and bag corn for distribution to Catholic Charities Foodbank as well as several church food banks in Terre Haute and the Wabash Valley.

The harvest was the best yield, Rosene said, as it missed hot and dry weather in July.

“Unfortunately, with sweet corn, most sweet corn plants produce two ears, but our mechanical picker can only pick one ear. We end up sacrificing that second ear, but it is the only way for us to do this efficiently, otherwise we would have to hand pick every ear — another 39,000 of them,” Rosene said.

“We want to distribute this corn as fast as we can, as the sugar content goes way down as soon as you pick it,” said Homer Beach, a driver for Catholic Charities. “What we don’t distribute, we will put in a cooler to keep a couple of days.”

For Britton, being outdoors is part of the learning experience at Ivy Tech Community College Terre Haute.

“This is like real world experiences, so instead of just listening to someone lecture in a class, we get hands-on experience,” Britton said.

Ivy Tech student Zebb Butts said he sought to pursue agriculture “as when I was growing up we always had a little bit of livestock, I was in 4-H and FAA and kind of grew up around it all my life.”

“Giving back to the community is a really important aspect when it comes to my life,” Britton said. “We are helping people in need.”