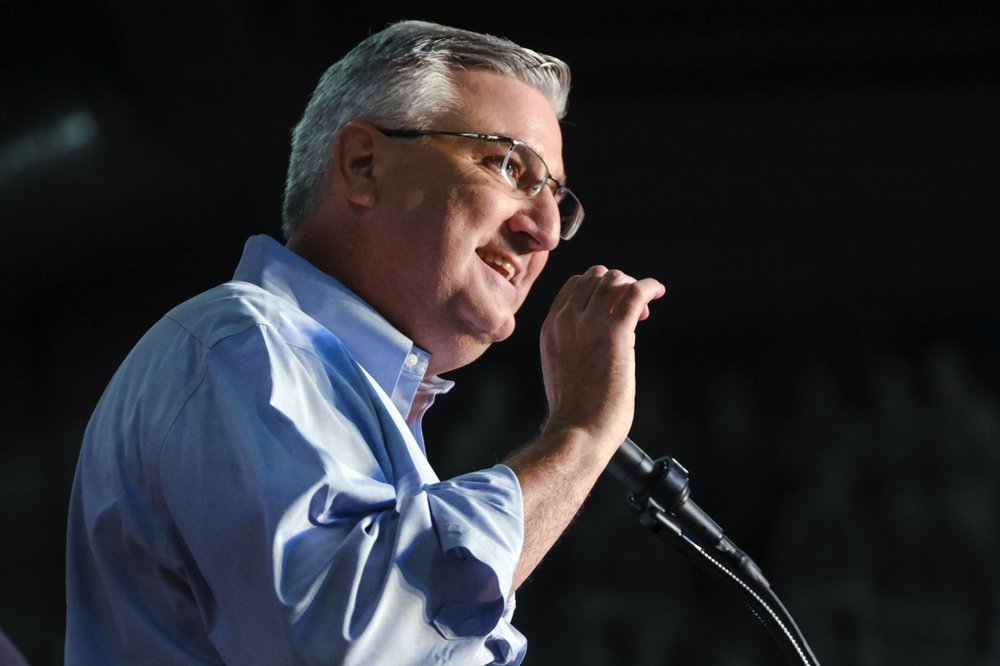 Republican Gov. Eric Holcomb brandished his front-runner status Saturday as he kicked off his re-election campaign with a rally extolling the state’s economy while brushing off any criticism of his record.

Holcomb made his announcement before a few hundred people at Knightstown’s Hoosier Gym, which served as the home court for the fictional underdog Hickory Huskers basketball team in the 1986 movie “Hoosiers.” But he heads into the 2020 election with $6 million already in his campaign’s bank account thanks to his leverage of leading a GOP-dominated state without any high-profile Democrats vying to unseat him.

Holcomb touted what he says are record hiring commitments from businesses since he took office in 2017 and numerous infrastructure investments, including work to complete the Interstate 69 extension through southwestern Indiana and plans for upgrading the South Shore commuter rail line between South Bend and Chicago.

Democrats fault Holcomb for what they call “empty promises” on issues such as raising teacher pay, expanding the state-funded preschool program and lowering health care costs.

Holcomb, however, argued that policies under Indiana’s Republican governors the past 15 years have given the state a top-level AAA credit rating and enabled it to beat other states for jobs and business investment.

“We’re going to keep on winning, because this state, we provide certainty, and we provide stability and predictability and an aspirational continuity about our conduct of affairs,” Holcomb said. “We are exactly, exactly what the entrepreneurs and the career creators are craving.”

Now the most powerful elected official in the state, Holcomb was only a little-known former state Republican Party chairman four years ago. He was struggling to raise money for a U.S. Senate campaign when then-Gov. Mike Pence appointed him to be lieutenant governor in early 2016. He became the party’s gubernatorial candidate after Donald Trump picked Pence as his running mate.

Former Republican Fort Wayne Mayor Paul Helmke, now an Indiana University public affairs professor, said Holcomb has used the power of incumbency well and avoided major controversies such as what Pence faced over Indiana’s 2015 religious objections law that was widely panned as a sanctioning of discrimination against members of the LGBTQ community under the guise of religious belief. An intense social media and business backlash led lawmakers to make changes that prevented the state law from overriding local LGBT-rights ordinances.

“People hear his name and don’t hear any clear negatives or criticisms of him,” Helmke said of Holcomb. “He comes across as a nice guy, friendly, trying to do a good job. It really is an amazing story because I doubt four years ago he would’ve registered on anybody’s list of being somebody to pay attention to.”

“Indiana Democrats are offering a message about education, jobs, health care, equality, better elections,” Zody said. “Any candidate who’s out there on the ground, up and down the ballot, are talking about those things.”

Helmke said it could take a big shake-up in the Indiana campaign — such as South Bend Mayor Pete Buttigieg dropping his Democratic presidential campaign to run for governor — or national developments that are out of Holcomb’s control to put his re-election in danger.

“I think the only thing he really needs to worry about is some major economic downturn or major scandal, crisis for the Republicans at the national level,” Helmke said.

The governor said he and Lt. Gov. Suzanne Crouch would run a 2020 campaign that “shares the good news.”

“The stars are aligned and we have a record of positive results,” Holcomb said. “We are organized and we are mobilized, and we are energized to keep Indiana rising.”