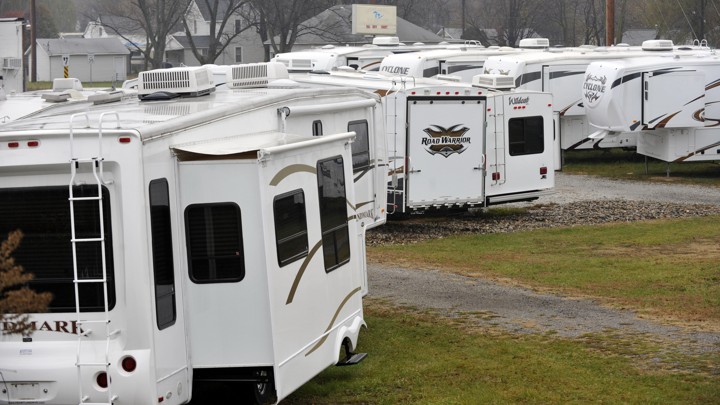 ELKHART (AP) — Economists are warning that a downturn in shipments of recreational vehicles from the northern Indiana county that calls itself the “RV Capital of the World” suggests an impending recession.

More than 80 percent of recreational vehicles sold in the U.S. are produced in Indiana, and roughly 65 percent of those come from Elkhart County, according to data from the RV Industry Association.

Wholesale shipments of RVs are down 20.3 percent so far this year, and companies such as Elkhart-based Thor Industries Inc. have slashed output and cut back the work week to slow production.

Ball State University economist Michael Hicks said consumers don’t buy RVs and other big-ticket items when money is tight, so economists watch for declines in the RV sector and a slowdown in auto sales as signals of a contracting U.S. economy.

Total U.S. auto sales fell 1.8 percent year-over-year in July, according to industry consultants JD Power and LMC Automotive. Also concerning are disruptions in international trade due to tariffs imposed on key markets such as China, Mexico and Canada.

“There is the wild card of the tariffs and the trade dispute being thrown in the mix, and it’s difficult to tease out how much of an impact those are having right now,” said Kevin Broom, spokesman for the RV Industry Association.

The association is predicting that shipments for the year will be down about 14 percet at the end of 2019. RV shipments have dropped in five periods since 1981, but only three of those periods were followed by recessions, Broom said.

In Elkhart County alone, the RV industry employs tens of thousands of workers. The county’s unemployment rate climbed to 3 percet in June, up from 2.8 percent a year earlier. And while this is below the state and national average, the average number of working hours fell in the county, Hicks said.

But that is a major turnaround from when Elkhart County’s jobless rate hit nearly 19 percent in early 2009 when the recession caused RV sales to crash.

″(RV shipments) have, in many cases, historically been an indicator of some trends in the national economy,” Stager said. “But, I prefer to stay positive about the national situation and how that could play out here.”