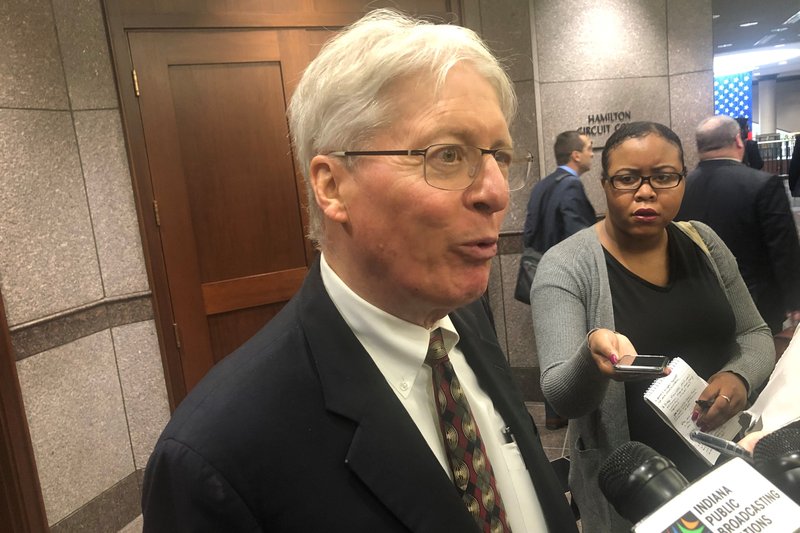 James Bopp, the attorney for conservative religious groups challenging limits on Indiana's religious objections law, speaks with reporters after a court hearing Thursday, Oct. 3, 2019, at the Hamilton County government center in Noblesville, Ind. Bopp argued the groups were subject to "grotesque stripping" of their religious rights by changes made to the 2015 law after a national uproar over whether it could be used to discriminate against gays and lesbians. (AP Photo)

An attorney for the Indiana Family Institute, Indiana Family Action and the American Family Association of Indiana told a Hamilton County judge that they were subject to “grotesque stripping” of their religious rights by changes made to the law following a national uproar over whether it could be used to sanction discrimination against gays and lesbians.

The Indiana law prohibits any government actions that “substantially burden” a person’s ability to follow his or her religious beliefs. The definition of “person” includes religious institutions, businesses and associations. Pence, a Republican who is now vice president, signed the bill but within days the GOP-dominated Legislature made revisions blocking its use as a legal defense for refusing to provide services.

The changes also prevented the law from being used to override local ordinances with LGBT protections, and the religious groups are also challenging civil rights ordinances in Indianapolis, Carmel, Bloomington and Columbus. The groups claim that protections based on sexual orientation and gender identity threaten to hinder their ability to speak out against same-sex marriages and expose them to claims of discrimination in hiring.

“That is a First Amendment chill,” attorney James Bopp said. “We are legitimately fearful.”

Lawyers for the state and the cities argue the groups haven’t faced government restrictions on their activities or hiring.

Jefferson Garn of the Indiana attorney general’s office said the lawsuit was based on a “speculative situation.”

“There is nothing that has happened against them,” Garn said. “There has been no enforcement action.”

At least 21 Indiana cities or counties _ representing about 38% of the state’s population _ now have local LGBT protection ordinances, according to the gay-rights advocacy group Freedom Indiana.

Bopp criticized the ordinance for Columbus, which is Pence’s hometown, for not including an exemption for religious groups.

Allen Whitted, an attorney for Columbus, said the aim of its anti-discrimination ordinance was to protect the ability of all people to participate in the community.

“Religion is protected in the same way as sexual orientation and gender identification,” Whitted said.

Judge Michael Casati didn’t say when he would issue a ruling.

The lawsuit was originally filed in December 2015. Bopp said after the hearing that the lawsuit’s filing helped prevent actions against the groups.

Chris Paulsen, a gay-rights advocate who helped lead opposition to the original 2015 law, said she is worried about a renewed backlash against the state if the lawsuit prevails.

“I don’t see anything positive coming out of changing the law. All I see are negatives, both personal and economic, for the state,” said Paulsen, who is CEO of Indiana Youth Group, an LGBTQ support organization.