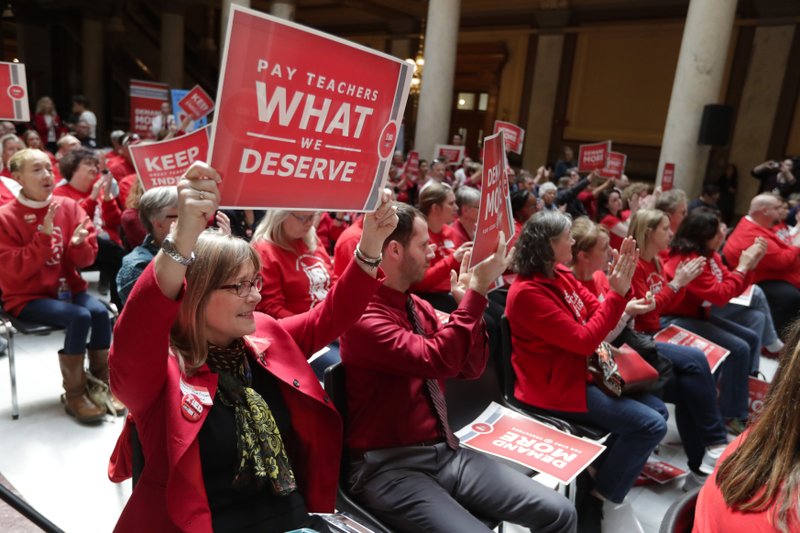 In this April 16, 2019 file photo, teachers cheer during a rally at at the Statehouse in Indianapolis. Indiana Gov. Eric Holcomb isn't promising any quick action on the call for further boosting teacher pay that thousands of educators will be making at the Statehouse next week. Teacher unions say at least 107 school districts with more than 40 percent of Indiana's students will be closed Tuesday, Nov. 19, 2019, while their teachers attend the rally. Holcomb didn't criticize school districts for closing, saying it was a local decision. (AP Photo)

INDIANAPOLIS (AP) — Indiana Gov. Eric Holcomb isn’t promising any quick action in response to educators who want more teacher pay, but says he shares their concerns and respects the decisions of school districts calling off classes for a Statehouse rally next week.

Thousands of educators will be calling for the further boost in pay Tuesday. Teacher unions say at least 107 school districts with some 460,000 students — or more than 40% of statewide enrollment — are expected to be closed that day while their teachers attend the event.

Holcomb said it is fully up to school districts if they want to close the day of the union-organized rally.

Numerous school district officials say they’ve decided to shut their doors because so many teachers requested personal time off for the rally that they wouldn’t be able to find enough substitute teachers to cover classrooms. But they also say they support the push by teachers for a bigger boost in school funding and their grievances on other issues.

Leaders of the state’s two main teacher unions project that 10,000 or more teachers could attend the rally dubbed “Red for Ed Action Day” as members of the Republican-dominated Legislature are gathering for organizational meetings ahead of their 2020 session that starts in early January.

“We’ve been doing all the steps that we’re supposed to be doing — writing emails, sending postcards, calling our legislators, meeting with them individually, going to town halls and asking about education in public forums,” said Smith-Margraf, a high school Spanish teacher from Lafayette. “We’ve been doing all of those things and we haven’t seen resolution to these very serious issues that we have.”

Large protests have come elsewhere amid a wave of teacher activism that began last year in West Virginia and spread to other states, including Kentucky, Oklahoma and Arizona. The American Federation of Teachers national president is expected at Tuesday’s Indiana rally, according to the union.

Indiana Democrats and teacher unions panned the new state budget approved by Republicans in April that boosted base school spending by 2.5 percet each of the next two years.

Holcomb and GOP legislative leaders touted the plan as making strides toward improving teacher pay. But they faced criticism for not directing some of the state’s $2 billion in cash reserves toward schools.

The Republican governor said he was waiting for a teacher pay commission he appointed in February to make recommendations on increasing salaries by the end of 2020.

“We are going to have a gap, still, to fill,” Holcomb said. “That teacher pay commission is what I am going to be paying very close attention to, that menu of options on how to bridge that gap.”

Education advocacy groups estimated this year a 9 percent funding increase was needed to boost average teacher pay to the midpoint of Indiana’s neighboring states. Republican state schools Superintendent Jennifer McCormick has cited a study showing Indiana as the state with the lowest teacher salary increases since 2002.

Districts closing Tuesday range from urban ones in Indianapolis, Evansville, South Bend and Hammond to small rural districts such as the 380-student Tri-Township Consolidated Schools in northern Indiana’s LaPorte County.

“A strong show of support for our local teachers and all educators across our state is certainly a worthy cause,” Tri-Township Superintendent Kelly Shepherd said in a letter to parents. “Our students will benefit greatly in the long run if a cohesive and united message is presented to our state legislators.”

School districts looking to continue with classes Tuesday are struggling with how to cover their classrooms. Fort Wayne Community Schools had day-off requests from about 650 of its 1,825 teachers as of Wednesday afternoon but still planned to keep schools open, district spokeswoman Krista Stockman said.

The teacher unions are also pushing for a rollback in the use of student test scores to evaluate teachers and schools after lower scores on the state’s new ILEARN standardized exam taken last spring. They also want the repeal of new license requirements pushed through by Republican legislators this year requiring teachers to log 15 hours of professional development regarding the needs of local employers.

Holcomb said he would detail legislative proposals in early December and that he heard teachers “loud and clear.”

“One thing I hear from teachers and agree with, quite frankly, is we need some continuity, some consistency, so that this is not a hodge-podge year after year where we’re changing back and forth, back and forth,” he said.