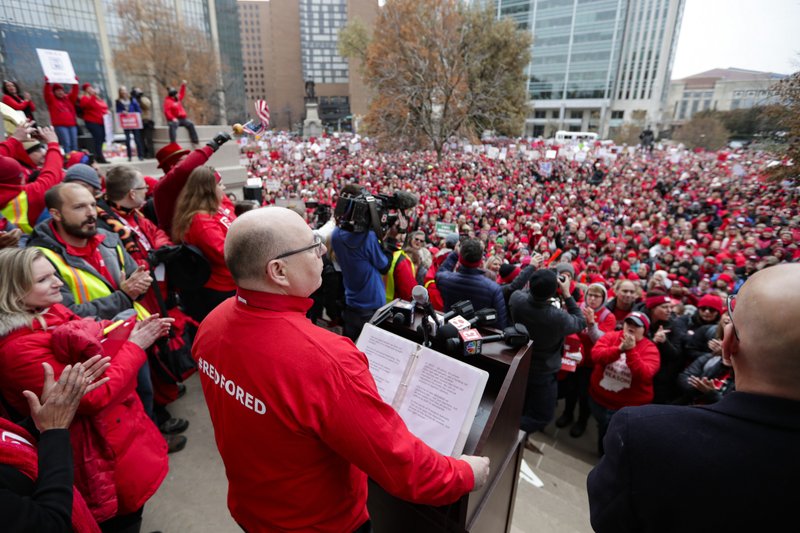 Keith Gambill, president of the Indiana State Teachers Association, of Evansville, Ind., speaks to the thousands of Indiana teachers wearing red as they surrounded the Statehouse in Indianapolis, Tuesday for a rally calling for further increasing teacher pay in the biggest such protest in the state amid a wave of educator activism across the country. Teacher unions says about half of Indiana's nearly 300 school districts are closed while their teachers attend Tuesday's rally while legislators gather for 2020 session organization meetings.(AP photo)

INDIANAPOLIS (AP) — Several thousand teachers wearing red surrounded the Indiana Statehouse on Tuesday calling for better pay and more respect from the Republican-dominated state government in a protest that closed more than half of the state’s school districts for the day.

The union-organized rally represented Indiana’s biggest such teacher protest amid a wave of educator activism across the country over the past two years.

Teachers chanted “Fund our schools” and “Put kids first” as hundreds of them lined entrances to the Statehouse, many holding hand-made signs with sayings such as “Less Money on Testing, More Money on Students.” Teachers with marching band instruments played “We’re Not Gonna Take It” from the Statehouse steps.

High school math teacher Angela Cooper said she and more than 40 fellow teachers from the Gibson Southern schools near Evansville left about 4:30 a.m. for the rally. She said a top worry is low pay causing many new teachers to leave for other jobs.

Indiana State Teachers Association President Keith Gambill told a few thousand teachers who covered the Statehouse lawn that the Legislature should direct money from the state’s $2 billion in cash reserves toward helping schools.

“The crisis is now and we need action now,” Gambill said to cheers from the crowd. “The issue is funding, and the state has the money.”

Teacher unions counted about half of Indiana’s nearly 300 school districts as closed while their teachers attend Tuesday’s rally as legislators gather for organizational meetings ahead of their 2020 session that starts in early January. Fort Wayne and East Allen County schools closed Tuesday.

Republican Gov. Eric Holcomb and leaders of the GOP-dominated Legislature have avoided direct criticism of teachers or school district for the closings, but said they don’t expect to take action on further boosting school funding until at least 2021.

Indiana Republicans seem intent not antagonizing educators as Kentucky GOP Gov. Matt Bevin, who lost his reelection bid this month, did in lashing out at teachers who used sick days to rally at Kentucky’s Capitol.

But Holcomb wasn’t seen at the Statehouse on Tuesday. His office said he was keeping long-standing plans for traveling to Florida for a conference of the Republican Governors Association, which gave nearly $5.9 million toward Holcomb’s 2016 election campaign.

Large teacher protests began last year in West Virginia and spread to other states, including Kentucky, Oklahoma and Arizona.

Indiana Democrats and teacher unions panned the new state budget approved by Republicans in April that boosted base school spending by 2.5% each of the next two years.

Holcomb and GOP legislative leaders touted the plan as making strides toward improving teacher pay. But they faced criticism for not directing some of the state’s $2 billion in cash reserves toward schools.

The Republican governor said he was waiting for a teacher pay commission he appointed in February to make recommendations on increasing salaries by the end of 2020.

Education advocacy groups estimated this year a 9% funding increase was needed to boost average teacher pay to the midpoint of Indiana’s neighboring states. Republican state schools Superintendent Jennifer McCormick has cited a study showing Indiana as the state with the lowest teacher salary increases since 2002.