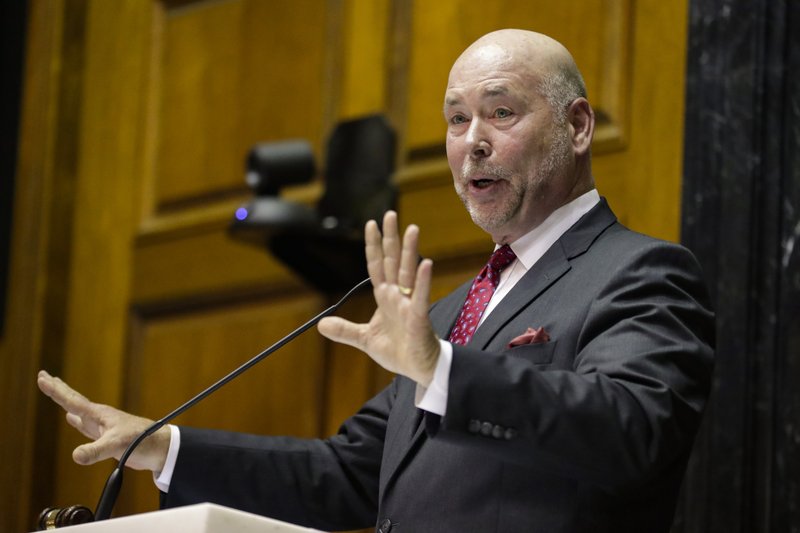 NDIANAPOLIS (AP) — The longest-serving leader of the Indiana House announced Tuesday that he will retire after the 2020 legislative session.

Republican Speaker Brian Bosma told lawmakers that he would continue in the powerful position that largely controls which proposals are considered until the upcoming session ends in March. Bosma, 62, said he wouldn’t seek reelection in 2020 after 34 years in the House.

Bosma presided over the House as Republicans took major steps such as creating the state’s private school voucher program, approving the contentious state religious objections law, leasing the Indiana Toll Road to a private operator and adopting statewide daylight saving time. He maneuvered last spring’s passage of a state hate-crimes law that critics fault for not having language that explicitly covers age, sex or gender identity.

He also spearheaded the GOP push to make Indiana the first Midwestern state with a “right to work” law barring companies and unions from signing contracts that require employees to pay union fees. That bill prompted lengthy boycotts by Democratic lawmakers in 2011 and 2012 that ultimately failed as Bosma ordered $1,000-a-day fines against them.

Bosma on Tuesday touted the growth of Indiana’s $2 billion in cash reserves, the state’s top credit rating, and cuts in state corporate and income taxes during his time leading the House.

“While we’re not perfect, Indiana is really the envy of the nation on the fiscal and business front,” he said.

Bosma has been the top House Republican as either speaker or minority leader since 2001. He was first speaker in 2005-2006 as Mitch Daniels’ election as governor helped Republicans regain a House majority after six years.

Democrats took control again for four years, but Bosma has been speaker since 2011. And GOP control of redistricting that year helped propel them to supermajorities topping two-thirds of the House since 2013 that enable Republicans to take action even with no Democrats present.

House Democratic leader Phil GiaQuinta of Fort Wayne said he had many policy disagreements with Bosma but called him a good friend and worthy adversary.

“The speaker has probably grown in the way he’s done his job over the last couple of sessions, trying to include more Democrats in decision-making versus when he first started,” GiaQuinta said.

Bosma pushed a proposed state constitution amendment banning gay marriage for several years until it stalled in 2014, a year before the U.S. Supreme Court legalized such marriages nationwide.

That fight was followed in 2015 by the battle over a religious objections law, which Bosma supported until it faced a national uproar over whether it could be used to sanction discrimination against gays and lesbians. Bosma was then among GOP legislative leaders who within days negotiated revisions blocking its use as a legal defense for refusing to provide services that then-Gov. Mike Pence reluctantly signed.

Republican House members will select Bosma’s successor in the coming weeks. Bosma said the successor will work with him during the 2020 session and take over GOP caucus leadership heading into the November 2020 election when all 100 House seats will be on the ballot.