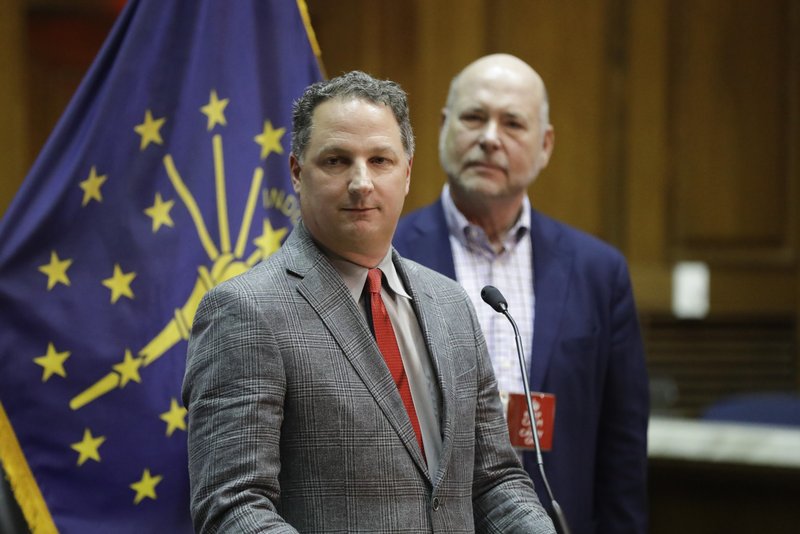 State Rep. Todd Huston speaks during a news conference at the Statehouse Monday. Republican legislators selected Huston to become the next leader of the Indiana House. (AP photo)

INDIANAPOLIS (AP) — Republicans who control the Indiana House picked a key state budget negotiator on Monday as the next speaker.

State Rep. Todd Huston, 47, of Fishers, won the private vote among GOP House members that was held 13 days after longtime House Speaker Brian Bosma announced he would retire after the 2020 legislative session.

Huston was first elected to the Legislature in 2012 representing a Hamilton County district in the fast-growing northern Indianapolis suburbs. Huston led the House Ways and Means Committee as the new two-year state budget was negotiated earlier this year after Bosma appointed him as co-chairman following a motorcycle accident that severely injured committee Chairman Tim Brown in October 2018.

Bosma said Huston was elected unanimously as he was the only candidate nominated as speaker-elect.

Huston said he has looked forward to following Bosma in the powerful position, which largely controls which proposals the House considers and appoints leaders of its some two dozen committees reviewing legislation.

“We’re going to be aggressive in moving the state forward,” Huston said during a news conference in the House chambers. “We’re going to do it in a way that brings honor to this building.”

Bosma said he’ll work closely with Huston during the upcoming session that begins in early January and is set to adjourn in mid-March. Huston will take over GOP caucus leadership heading into the November 2020 election, when all 100 House seats will be on the ballot and Republicans will be seeking to retain their two-thirds supermajority that allows them to take action even without any Democrats present.

“He has proven himself a strong leader and has touched so many facets of state government through the budget process,” Holcomb said.

Huston is a senior vice president of the College Board, the company that administers the SAT college admissions test and high school advance placement exams. He was the state Republican Party treasurer and was chief of staff for GOP former state schools superintendent Tony Bennett before winning election to the Legislature.

Huston was Bennett’s chief of staff in 2009 and 2010 as the state schools superintendent worked with then-Gov. Mitch Daniels on contentious education overhaul plans, including launch of the nation’s broadest private school voucher program, a merit pay system for teachers and pushing for state takeover of public schools with records of low student scores on standardized exams.

Much of that agenda won legislative approval after Republicans regained House control with the 2010 election, and Bosma took over as speaker. But Bennett became a lightning rod for teacher anger and lost his 2012 reelection bid.

Huston took active role in education issues when he first joined the House, including sponsoring a bill to expand eligibility for the private school voucher program. But he soon moved to the budget-writing Ways and Means Committee and focused more on fiscal-related issues.

Huston said he didn’t believe teachers should be worried about his expanded role in the Legislature.

“I think anybody that knows me knows the appreciation and gratitude I have for teachers and I wouldn’t anticipate that will ever change,” he said.

Huston was a top House negotiator on the new state budget approved by Republicans in April that boosted base school spending by 2.5% each of the next two years. Holcomb and GOP legislative leaders touted the plan as making strides toward improving teacher pay, but teacher unions and Democrats criticized it for not directing some of the state’s $2 billion in cash reserves toward schools.

Huston also sponsored the bill this year legalizing sports betting in the state and allowing construction of new casinos in Terre Haute and Gary.

Bosma has been the top House Republican as either speaker or minority leader since 2001. He was first speaker in 2005-2006, after which Democrats regained House control for four years, but Bosma has been speaker since 2011.

Huston’s rise represents another step in the turnover of legislative leadership after state Sen. Rodric Bray of Martinsville became the Indiana Senate’s top leader in November 2018. Bray, who was first elected to the Senate in 2012, took the place of Sen. David Long of Fort Wayne, who retired after 12 years as the Senate’s president pro tem.