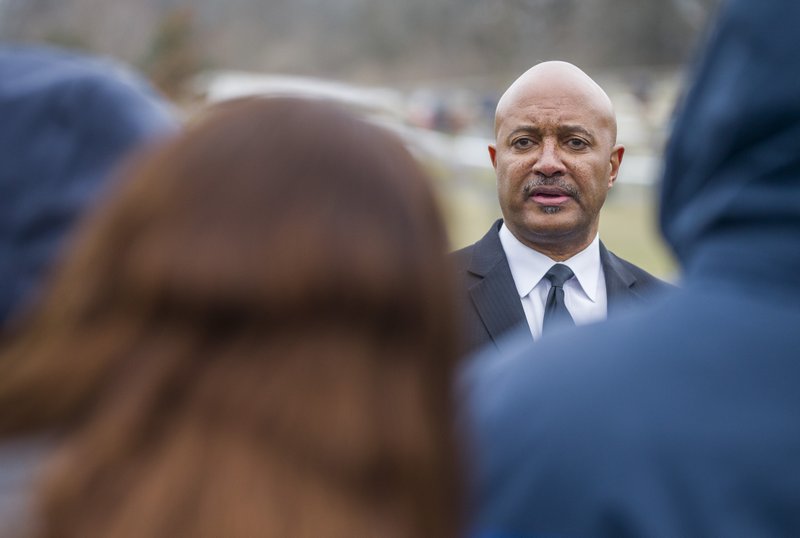 Indiana Attorney General Curtis Hill speaks to media at a burial service Wednesday in South Bend, for the more than 2,400 fetal remains found at the home of an abortion doctor. (AP photo)

SOUTH BEND (AP) — More than 2,000 sets of fetal remains found last year at the suburban Chicago garage of one of the Midwest’s most prolific abortion doctors were buried Wednesday at an Indiana cemetery where the state’s attorney general told a gathering that the remains’ discovery was “horrifying to anyone with normal sensibilities.”

The mass burial of the 2,411 fetal remains was held in South Bend beneath a blue canopy at a plot at Southlawn Cemetery donated by the Palmer Funeral Home. Attorney General Curtis Hill, a conservative Republican who opposes abortion rights, delivered remarks from a podium affixed with his office’s seal following the burial.

Wednesday’s service came five months after relatives sorting through Dr. Ulrich Klopfer’s belongings following his Sept. 3 death came across 2,246 sets of preserved fetal remains stacked floor to ceiling in his Illinois garage. Later, 165 more were found in a trunk of a car at a Chicago-area business where Klopfer kept several vehicles.

Hill told about 100 people who gathered for the service that the fetal remains resulted from abortions Klopfer had performed at his Indiana clinics between 2000 and 2003, but had “ghoulishly packed up and stored away in his garage” and “callously discarded in the trunk of his car for nearly two decades.”

“The shocking discovery of 2,411 medically preserved fetal remains in Illinois, left in a garage and in the trunk of a car, was horrifying to anyone with normal sensibilities,” Hill said, adding that the remains had now received “an appropriate resting place.”

Following the service, many of those who gathered at the cemetery prayed, sang songs and listened to remarks by anti-abortion activists, the South Bend Tribune reported.

Klopfer, who was 79, performed tens of thousands of abortions over 40 years, mainly in Indiana — a state with some of the nation’s toughest anti-abortion laws — and often as the only abortion doctor serving South Bend, Gary and Fort Wayne. He was a reviled figure among anti-abortion activists, who held weekly demonstrations outside his now-shuttered clinics.

Klopfer’s medical license was suspended in 2016 by Indiana regulators who cited shoddy record-keeping and substandard patient monitoring. He operated a clinic in Fort Wayne and other cities.

Indiana is one of just a few states with a law mandating burial or cremation of fetal remains after abortions. The law did not take immediate effect because of court challenges after then-Gov. Mike Pence signed it into law in 2016. A U.S. Supreme Court ruling in May upheld the law.

Previously, during Klopfer’s career, clinics could turn over fetal remains to processors that dispose of human tissue or other medical material by incineration.

There’s no indication Klopfer told others about his grim collection, including his wife. And no one has a clear understanding of his motive. Some have speculated that it was part of a hoarding disorder or that he was trying to save disposal costs as he racked up legal bills suing and being sued by abortion opponents.

Hill said in a message posted on his office’s Facebook page along with a video of his remarks that the remains “were senselessly hoarded by Dr. Ulrich Klopfer after he performed the abortions.”

Hill’s office continues to investigate the fetal remains, after releasing a preliminary report in December on the discovery of the remains in Illinois and thousands of abandoned patient medical records found at Klopfer’s former Indiana clinics and other properties.