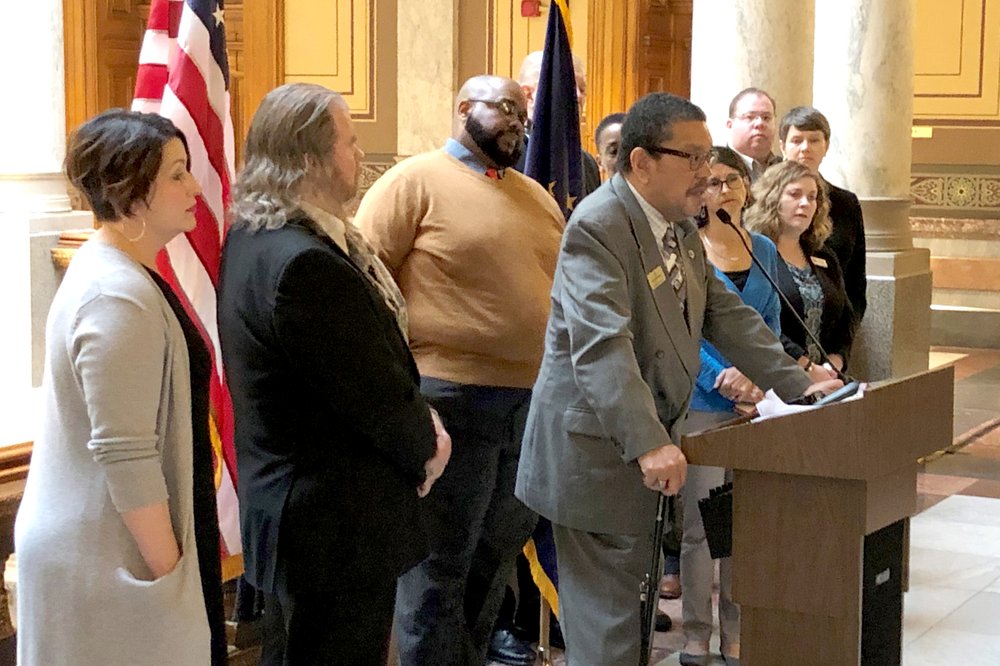 Mark Russell, director of education and family services for the Indianapolis Urban League, speaks against a Republican-backed proposal to block Indiana cities from regulating rental properties at the Statehouse in Indianapolis. (AP Photo)

INDIANAPOLIS (AP) — Opponents are warning that a Republican push to block Indiana cities from regulating rental properties threatens existing local protections for tenants and would tilt state law heavily in favor of landlords.

The proposal remained under negotiations Tuesday by House and Senate members ahead of Wednesday’s expected adjournment of this year’s legislative session.

The possible restrictions emerged two weeks ago as Republicans took up the limits backed by the Indiana Apartment Association as the Democratic-controlled Indianapolis City-County Council approved an ordinance that included allowing fines for landlords who retaliate against renters over living condition complaints. It also required landlords to give tenants information on their legal rights and responsibilities.

GOP leaders and the apartment association argued that tenant-landlord regulations should be uniform statewide, but tenant advocates maintain the proposal would be unfair to the some 2 million Indiana residents living in rental housing.

“It is a form of second-class citizenship that shouldn’t be acceptable,” said Mark Russell, director of education and family services for the Indianapolis Urban League. “This retaliation hurts citizens who are the most vulnerable. It occurs regularly, and it occurs without regulation.”

The proposal, approved mostly along party lines in the House last week, would prohibit local regulations on any “aspects of the landlord-tenant relationship,” including the screening process for renters or requiring notification of tenants’ rights. That version also would limit tenants to receiving one month’s rent if a court finds that person was a victim of landlord retaliation, while landlords could be awarded attorney fees and damages if they win in court.

Republican negotiators said they were working on revisions to better equalize how renters could be treated in court.

“We felt like the balance was swung too far the wrong direction in the actions here in Marion County,” said GOP House Speaker Todd Huston, who assumed the top House position on Monday. “We want to find the right balance for statewide action. At the end of the day, we want people to make investments that have quality housing available.”

Opponents say they’re worried the proposal would negate current local regulations, such as those on apartments in college towns, including Bloomington and West Lafayette. They also raise concerns about whether the proposal’s impact on local anti-discrimination ordinances in cities such as Indianapolis, Columbus and South Bend that go further than state law and include protections based on sexual orientation.

Jessica Love, executive director of community advocacy group Prosperity Indiana, said the group and others believe cities and counties should have the authority to regulate rental properties based on the needs of their communities.

Democratic Rep. Robin Shackleford of Indianapolis said Republicans haven’t been able to say how many local ordinances would be voided if the proposal prohibiting such regulation is approved.

“The phrasing says ‘all other,'” Shackleford said. “‘All other’ includes basically everything. The language is too broad and will have a detrimental effect on everything the cities have pre-existing.”