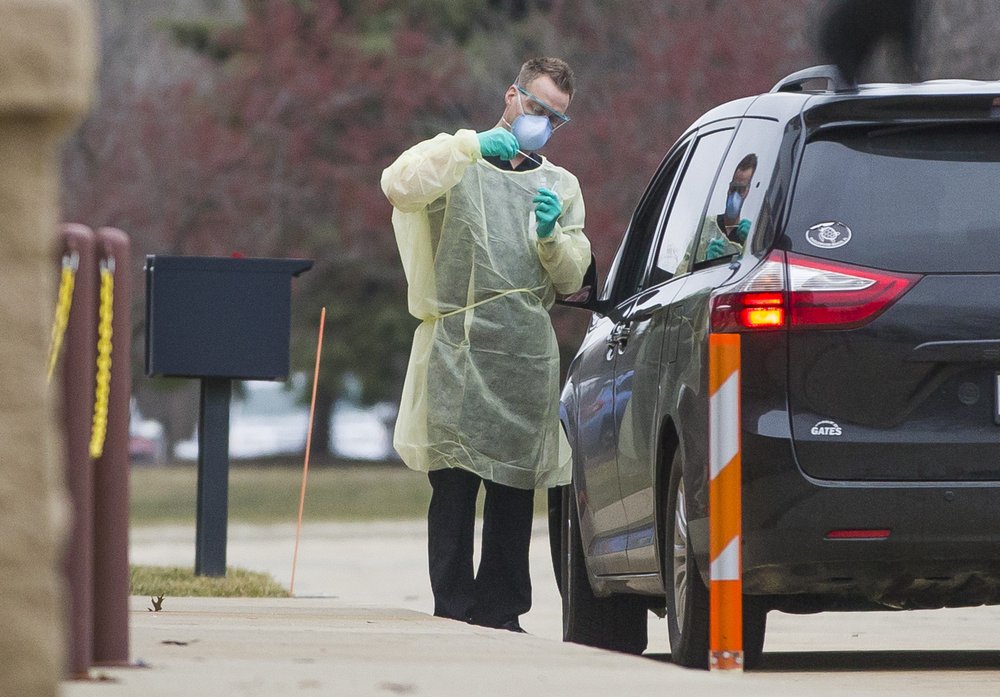 A health care worker tests a patient for the coronavirus in a drive-through site outside a clinic in South Bend. (AP photo)

INDIANAPOLIS (AP) — Five more people in Indiana have been sickened by the coronavirus, including three in the same suburban Indianapolis county, boosting the state’s tally of cases to 11, health officials said Wednesday.

Johnson County, just south of Indianapolis, has three presumptive positive cases of COVID-19 — the disease caused by the virus — and north-central Indiana’s Howard County has one, the state Department of Health said.

A fifth new case of COVID-19 was announced Wednesday afternoon by health officials in northern Indiana’s St. Joseph County — an adult male who is quarantined at his home tested positive for the coronavirus, said Dr. Mark Fox, the county’s health officer. He was tested outside a private outpatient clinic in “a drive-through situation,” Fox said.

“He came to the parking lot of an outpatient facility and the health care provider, in appropriate personal protective gear, went out to the individual’s car and obtained the necessary specimens for testing,” Fox said.

The state Department of Health’s online dashboard for COVID-19 cases still showed 10 cases statewide as of Wednesday evening based on tests performed by the agency’s laboratory, but spokeswoman Jeni O’Malley said it hopes “to expand it in the future to capture tests” that private labs report to the state.

With the exception of Hendricks County, which has two cases, and Johnson County’s three cases, Indiana’s other counties with COVID-19 — Adams, Boone, Hendricks, Marion and Noble — each have one case. The department said 43 people in Indiana have been tested for the virus, either by that agency or the Centers for Disease Control and Prevention.

Indiana will be getting $10.3 million in funding to help its response efforts to COVID-19, the U.S. Department of Health and Human Services announced Wednesday. That funding is coming from an $8.3 billion measure that President Donald Trump signed Friday.

The World Health Organization declared the global outbreak a pandemic on Wednesday.

For most, the virus causes only mild or moderate symptoms, such as fever and a cough. For some, especially older adults and people with existing health problems, it can cause more severe illness, including pneumonia. The vast majority of people recover.

According to the World Health Organization, people with mild illness get better in about two weeks, while those with more severe illness may take three to six weeks to recover. In mainland China, where the virus first exploded, more than 80,000 people have been diagnosed and more than 58,000 have recovered.

Indiana’s growing number of cases since the first one was reported last Friday in Marion County prompted Indiana and Purdue universities to announce Tuesday the suspension of classes on all campuses following spring break. The campuses will be open, however, and students will have the option to return to campus or not.

The University of Notre Dame followed suit Wednesday, suspending classes on the South Bend campus starting March 23 through at least April 13. The school, which is currently on spring break, also canceled all classes for next week to allow faculty to adjust to online instruction.

Health officials in Marion County, home of Indianapolis, on Wednesday urged seniors with chronic medical ailments such as heart disease, diabetes and lung disease to reconsider before attending any large public gatherings, including sporting events and festivals.

Indiana’s presumptive positive cases of COVID-19 include an elementary school student in the Hendricks County community of Avon, just west of Indianapolis. The school district has cancelled classes and all related activities until April 6.

Indiana residents urged to continue to abide by virus order

INDIANAPOLIS (AP) — Indiana’s health commissioner urged Hoosiers on Tuesday to continue to adhere to the ...