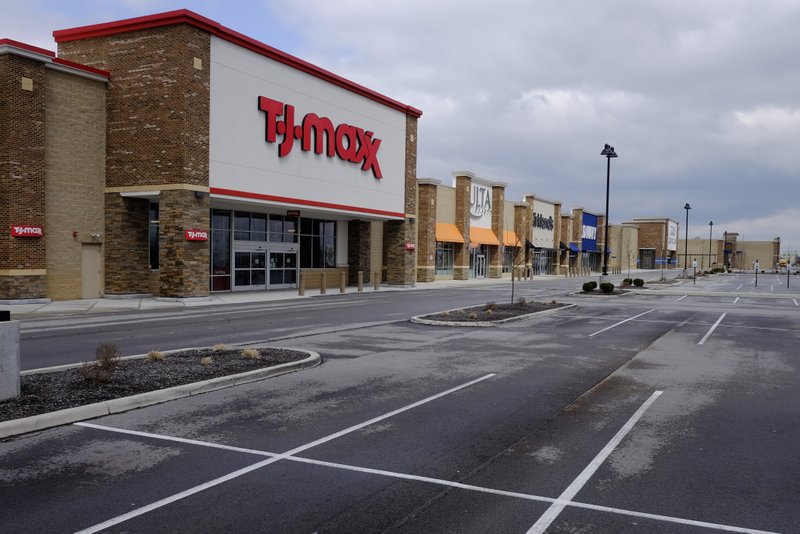 An empty parking lot is seen at retail stores are closed in Whitestown, Ind. Evidence of the devastating impact of the coronavirus on the U.S. economy has been steadily emerging, and the evidence is ominous. Sales at retail stores and restaurants plunged in March by the most on records dating back almost 30 years. (AP photo)

INDIANAPOLIS (AP) — Indiana’s number of coronavirus-related deaths in one month has tripled the state’s typical level of flu deaths over a seven-month period. More than 100,000 people also filed new unemployment claims in Indiana last week amid the economic fallout from business and travel restrictions.

The Indiana State Department of Health on Thursday reported 41 additional COVID-19 deaths, raising the state’s death toll to at least 477 people. The newly recorded deaths occurred between April 2 and Wednesday.

The first reported death in Indiana happened March 15, with more than three-quarters of the deaths occurring in the past two weeks.

Indiana has averaged about 150 flu deaths over a seven-month period in recent years, according to Dr. Kristina Box, the state health commissioner.

Box voiced some optimism Wednesday that steps such as the statewide stay-at-home order have slowed the growth of COVID-19 infections and allowed Indiana hospitals to maintain their capacity to treat seriously ill patients.

But Box has said she expected the coronavirus illness peak to arrive in late April for the Indianapolis area and the first weeks of May for rest of the state.

The health department also reported 611 new COVID-19 infections Thursday, giving Indiana more than 9,500 cases even though testing has been largely limited to those seriously ill and health care workers.

The number of people who have lost jobs in Indiana during the coronavirus outbreak has grown to at least 444,000, according to federal statistics released Thursday.

Indiana had some 118,000 initial claims for unemployment benefits filed last week. That was down slightly from the 127,000 filed a week earlier but still far beyond the previous record levels seen during the recession in 2009.

Indiana’s jobless claims have soared over the past four weeks as many retailers, hotels, factories and other businesses closed amid restrictions aimed at slowing the spread of COVID-19 illnesses. The state was typically receiving fewer than 3,000 new unemployment claims a week before that.

Around the country, 5.2 million more people applied for unemployment benefits last week, bringing the running total to about 22 million out of a U.S. work force of roughly 159 million — easily the worst stretch of U.S. job losses on record.