MEMORIES OF WWII: Fort Wayne’s Robert Voelker was a singer for the Navy 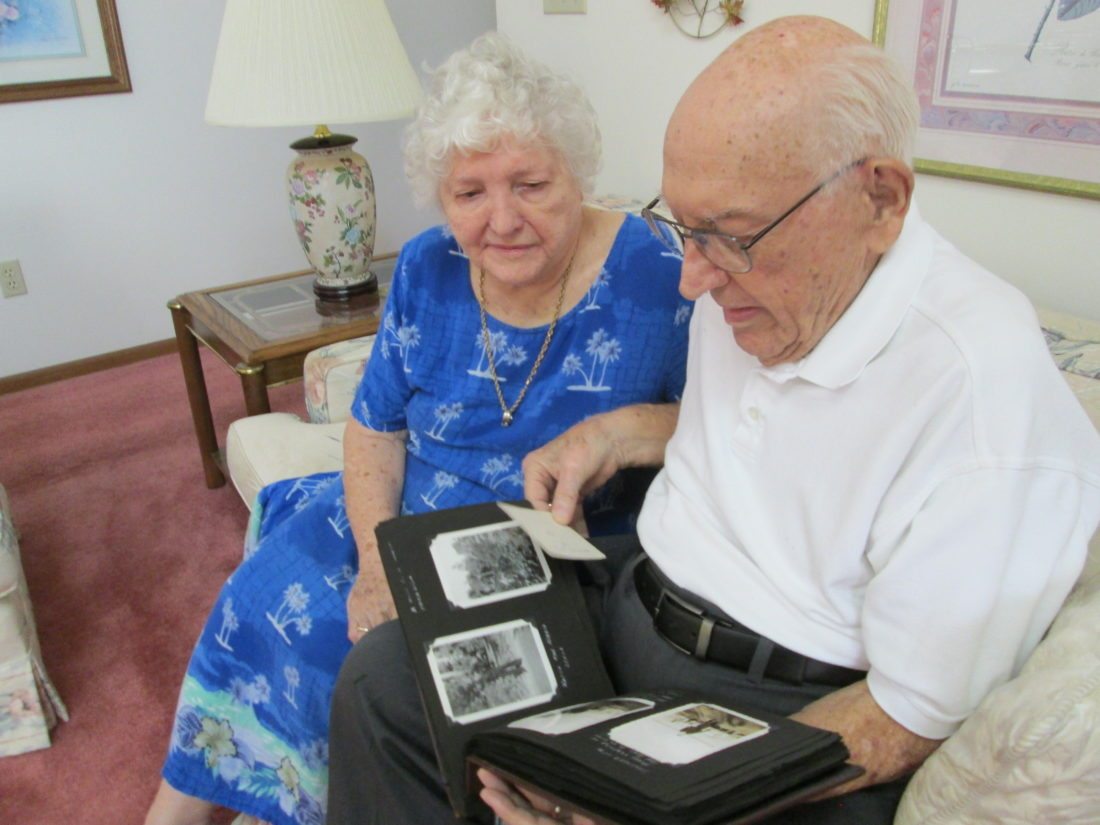 Robert Voelker served the American military for one year, one month and 24 days before being discharged in August 1946. He graduated with a degree in business from Indiana University in 1950 and worked several years for Lutheran Insurance (now Thrivent) before retiring in 1990. (Photo by Kayleen Reusser)

Editor’s note: This is one in a biweekly series about World War II veterans and their experiences.

One of the duties of Robert Voelker of Fort Wayne while serving with the Navy during World War II was connected with skills he learned as a high school student at WOWO radio.

Voelker was born in Fort Wayne in 1927 and attended Central High School. As a student, Voelker sold newspapers.

“My brothers and I delivered to 200 customers during high school,” he said.

“We were students from Central, South Side and North Side high schools who liked to sing,” he said. “Each Sunday afternoon, we sang on WOWO radio, usually patriotic and pop songs.”

One of Voelker’s singing friends was Philemon ‘Phil’ Steigerwald, well known in the Fort Wayne area for many years as Santa Claus for Wolf & Dessauer Department Store in downtown Fort Wayne. Steigerwald graduated from South Side High School and was a soloist at Plymouth Congregational Church in Fort Wayne and other locales prior to his death in 2004.

After graduating from Central in 1945, Voelker enlisted in the Navy.

However, rather than be sent to Great Lakes Naval Training Center in Chicago for basic training like most naval recruits, Voelker was sent to Camp Sampson in Geneva, N.Y.

Camp Sampson had been established in 1942 as an alternate naval training center. Voelker was assigned to the naval choir company.

“We sang for public and military groups, usually patriotic songs,” he said.

Camp Sampson was renamed Sampson Air Force Base prior to being closed in 1956.

When the war ended, Voelker remained in the Navy and was sent to Jacksonville, Fla., where he held the rank of Storekeeper 3rd Class at Jacksonville Air Base. As part of his duties, Voelker purchased food for approximately 50 crew members. He also handled payroll.

“We gave out each seaman’s payroll in $2 bills to let people know the Navy was in town!” he said.

Although Voelker carried a 45-caliber pistol for protection when transporting the payroll off of the ship, he had a problem: “I didn’t know how to take the safety catch off of the gun to fire it,” he said.

Voelker served the American military for one year, one month and 24 days before being discharged in August 1946. He graduated with a degree in business from Indiana University in 1950 and worked several years for Lutheran Insurance (now Thrivent) before retiring in 1990.

Although Robert was the only Voelker family member to serve in the military during the war, his older brothers served at home. Martin Voelker was considered a gear expert at Dana and worked for the war effort in manufacturing there. Another brother, Norman, helped to make motors at General Electric.

Virginia ‘Ginny’ Smith-Voelker, Robert’s wife, was also involved in the war at home in the U.S. As a Rosie the Riveter, she worked the night shift at a factory in Grand Haven, Mich., making airplane parts. At age 18, she married Wayne Peebles, a member of the Army Air Corps serving in the Pacific.

Months later, Ginny was a widow when her young husband’s PBY plane went down near Okinawa. The telegram sent to her home delivering the sad news was slipped under the front door and found by Ginny’s mother, who notified her daughter at work.

“No bodies were retrieved from Wayne’s flight, which meant there was no closure for mourning,” she said.

A few years later, Ginny remarried. In 1964 she moved to Fort Wayne with her family. She was a widow for the second time for 10 years before she and Robert married in 2003. He had lost his wife of 34 years.

She and Robert had known each other as members of Praise Lutheran Church at Dupont, which he had helped to found.

“I think I taught his two sons in Sunday School,” said Ginny.

“I felt it was necessary to be part of the war effort during World War II and was glad I could be used,” said Robert. “I enjoyed it.”