Kayleen Reusser for The News-Sentinel 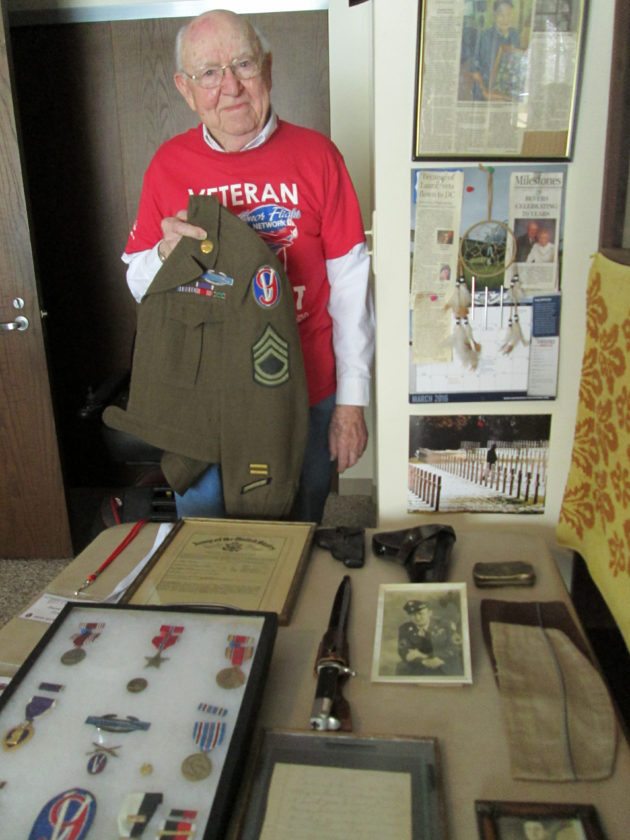 North Manchester's Frank Bever was drafted into the U.S. Army in 1942 and served in the European Theater. (Courtesy photo)

In July 1944, the 95th Infantry Divison, 379th Infantry Regiment, Company F, worked their way through hedgerows in northern France. The area had been occupied by Nazis for four years. They could see where combat had happened a few weeks earlier during the D-Day invasion.

The troops halted near Metz at the confluence of the Moselle and Seille rivers. Frank Bever of North Manchester was confronted with a life-threatening situation.

“We planned to cross the water at night,” he said. “The river was wide and at a flood stage which made it dangerous. Barges filled with armed German soldiers patrolled who would kill us if they spotted us.”

Bever made a covenant.

“I promised if God got me across safely, I would attend church.”

Bever made it across that night and kept his promise during and after the war. As the war raged on for several more months, Bever replicated that same prayer for safety in battle.

Bever was born in 1921 and grew up on a farm in Lagro. After graduating from high school in 1939, he worked in a factory making radios before being drafted into the U.S. Army in August 1942. Upon arriving for basic training at Camp Swift in Austin, Texas, he and other soldiers learned how to salute, march and take a rifle apart with their eyes closed.

“Compared to farm work, basic training was easy,” he said.

Bever’s unit participated in training maneuvers in Texas, California, Pennsylvania, West Virginia, Arizona and Louisiana. In spring 1944 Bever’s unit left from Boston on the USS West Point to cross the Atlantic to England, then Normandy. The D-Day invasion on Omaha Beach had taken place a few weeks earlier and as Bever’s unit passed through, they saw debris from the fierce battle.

“It was not a good greeting for us recruits,” he said.

Soon, the 95th encountered German soldiers and the fighting began. Bever was beside an American tank when Germans attacked the vehicle, destroying it. Shell fragments flew in all directions. Bever sustained facial and leg wounds but was luckier than one American soldier who died when his throat was cut.

“That was two escapes for me,” said Bever who was tended to by a medic and flown in a C-47 to England to heal in a hospital.

A few weeks later, Bever was back with Company F at the Rhine River. As the Allies captured German prisoners, they realized the enemy consisted of mainly teens.

Upon encountering a woman who had been rescued by another Allied unit from a German labor camp, Bever gave her a chocolate bar from his K rations.

“I had always wondered what good we were doing in the war,” he said. “After I heard about and saw the results of the labor and death camps, then I knew.”

After Germany surrendered in May 1945, the 95th sailed to New York Harbor for a one-month furlough. As it was designated to be sent to the Pacific for the invasion being planned of Japan, the 95th re-assembled for training in Pennsylvania in mid-August. Their routine was interrupted by an announcement.

“We were told bombs had been dropped on a couple of cities in Japan and the Japanese military had finally surrendered,” he said. “Truman had saved our lives. We were sorry for the number of lives that had been taken, but we were glad the war was over.”

After his discharge, Bever used the GI bill to study the printing industry in which he worked for 30 years. Later he served as a United States postmaster in Servia, Ind. before retiring at age 79. He and his wife, Olive, were parents to five sons.

Frank Bever, who considers his involvement with World War II to be “the greatest experience of my life”, attends military reunions. “We used to have 500 veterans attend,” he said. “Now it’s down to 100.”

Among those who attend is a French family from the Metz area. “They come every year to honor us and what we did for them,” he said. “They know what freedom is about.”