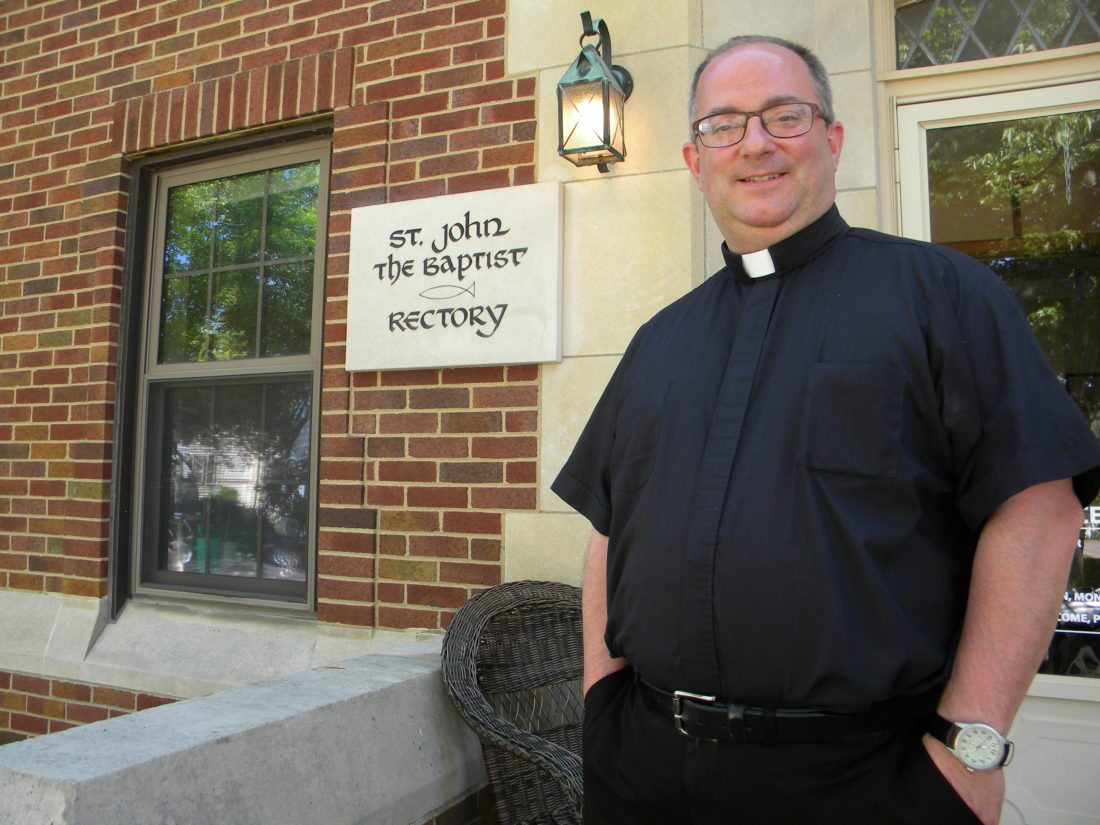 The Rev. Andrew Budzinski, vocations director for the Catholic Diocese of Fort Wayne-South Bend, said a few factors have contributed to an increased interest by young people in pursuing a calling to religious life. (By Kevin Kilbane of News-Sentinel.com)

The five young men who will be ordained as priests June 2 at the Cathedral of the Immaculate Conception — the largest group since 1975 — represent part of a renewed interest in the religious life among young people, the local Catholic diocese’s vocations director said.

“I am very proud of the guys we have in seminary now,” said the Rev. Andrew Budzinski, vocations director for the Diocese of Fort Wayne-South Bend. “They are wonderful men. The future is very bright for our diocese, I think.”

That hadn’t been the case for a few decades last century as young people’s lack of interest in joining the priesthood or religious life led to a shortage of priests and struggles for many religious orders of men and women.

Locally, that trend began to reverse about 15 years ago, said Budzinski, who also serves as pastor of St. John the Baptist Catholic Church in Fort Wayne.

The diocese now has 33 young men studying in seminary programs with the goal of becoming a priest, he said. The total has remained at about that number for the past eight years, which is more than double the number of men the diocese has at seminaries when Budzinski, now 45, started that journey 14 years ago.

He credits four factors for the growth of in the number of young men and women pursuing a calling to religious life:

• Many, but not all, have come from parishes where the pastor has been in place for a long time, Budzinski said. When a young man grows up with the same priest, the pastor can have a greater impact as a role model and mentor.

• “They come from families that practice their faith,” he said. “They go to Mass together, they pray together.”

• Many have been involved in a Catholic Church youth group, where they receive support from other young people about a possible calling to religious life, he said. Youth group members are young people who want to know Jesus and to know and do God’s will, he added.

• People’s attitudes about religious vocations have changed, and they no longer see becoming a priest as “weird,” Budzinski said. The previous viewpoint likely resulted from the Catholic Church’s requirement that priests remain celibate, serving as a spouse to all rather than to one person, he added.

More young men and young women also have been joining religious orders, he said. Because the orders aren’t directly affiliated with the Diocese of Fort Wayne-South Bend, he doesn’t have details on their membership growth.

For young men who feel God may be calling them to the priesthood, the diocese helps them through determining if that really is God’s plan, and it’s not a quick process.

“The guys will describe it as living under the microscope for five or six years,” Budzinski said.

Young men first must go through an application and discernment process, he said. Diocesan officials consider whether an applicant has the right tools and motivation to become a priest, as well as whether this is the right time for him to pursue that calling.

If a young man is approved to pursue studies for the priesthood, he will attend four years of college at a seminary followed by two years of theology classes, Budzinski said. Seminarians must pay half of the cost of attending their first four years of schooling, and the diocese pays all of the cost for the final two years.

Each year, a board at the seminary and local people involved the young man’s formation as a priest vote on whether he should continue his studies, Budzinski said.

After a young man’s third year of seminary, he begins spending his summers helping at a Catholic parish in the diocese to get real-life experience and to help him decide if he really wants to pursue life as a priest, Budzinski said. The pastors of those parishes also provide input on whether the seminarian seems well-suited for religious life.

“Priesthood is really serious business,” Budzinski said. “We have so much effect on people, for good or ill. This has to be someone truly called by God.”

By the time the young men are ordained a deacon after their fifth year of seminary, they are pretty much locked into being ordained a priest a year later, Budzinski said.

“These young men have to discern this is God’s call to my life, and I possess the requisite grace and maturity to respond to that,” he said.

About half of the young men who start seminary after high school drop out before they get to ordination, he said. For those who went to college on their own and then respond to a call to the priesthood, about 75 percent will progress through seminary training and become ordained as a priest.

The Fort Wayne-South Bend diocese also has started a mentorship program to work with new priests for their first five years after ordination, Budzinski said.

The goal is to find those with a true calling to religious life and to help them get started in their service to God, the church and others.

“God has a vocation for all of us,” Budzinski said. “Our duty is to find out.”

If you feel called to religious life and would like more information about pursuing that calling, you can contact the Diocese of Fort Wayne-South Bend’s vocations office via these options: