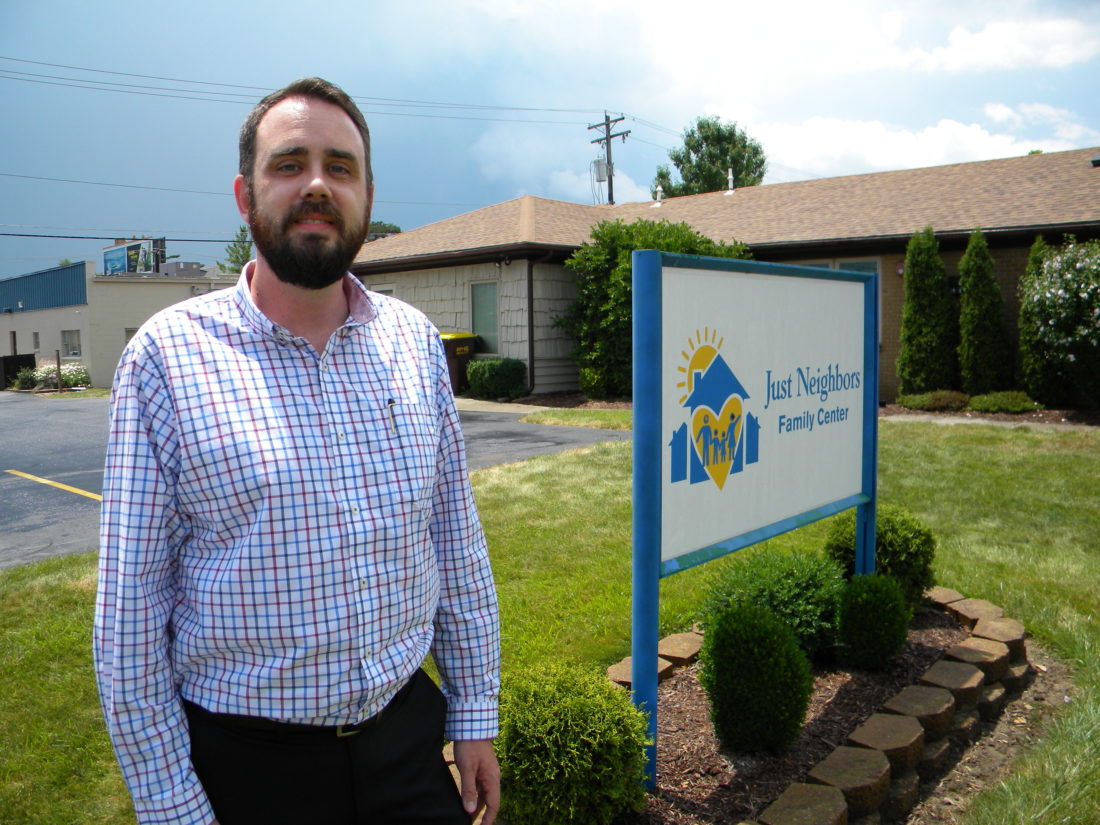 The Rev. Joshua Gale, new executive director of the Just Neighbors Interfaith Homeless Network, sees great possibilities ahead for the organization. (By Kevin Kilbane of News-Sentinel.com)

It’s easy for the Rev. Joshua Gale to explain what interested him his new job as executive director of Just Neighbors Interfaith Homeless Network in Fort Wayne.

He succeeds the Rev. Terry Anderson, who is moving into semi-retirement as an adjunct pastor at Trinity English Lutheran Church.

Just Neighbors provides housing for families at its location at East State Boulevard and Santa Rosa Drive. It also involves local religious congregations in providing donations and programming for the families.

Gale, an Illinois native and pastor in the Lutheran Church-Missouri Synod (LCMS) denomination, brings a wide range of experience to his new position.

A master’s degree in divinity graduate from Concordia Theological Seminary in Fort Wayne, Gale gained some of his early experience while working as a mission developer with Philadelphia Lutheran Ministries in Philadelphia.

That service included his first involvement in working with the homeless, including trying to help elected officials understand how their decisions affect people in need, he said.

Based on his work in Philadelphia, Gale said the LCMS asked him to serve as part of a missionary team in Lima, Peru, providing education for children in poor neighborhoods there.

Gale, who speaks Spanish fluently, returned to the Chicago area about a year ago to become executive director of Lutheran Church Charities, which works internationally to minister to people in need.

“I was talking to people who were doing the work I wanted to do,” he said of his interest in moving from there to Just Neighbors. “I want to see that change, not look at a computer screen.”

Gale has spent the past few weeks reacquainting himself with the community and getting to know executives at other local social-service agencies, he said. He also wants to listen to people about community needs.

“I have every confidence Joshua has a deep, caring heart and a good business background,” Anderson said.

Both attributes are key when helping a small nonprofit fulfill its mission, Anderson added.

Gale sees a great opportunity for growth by Just Neighbors, which served 82 families during 2017, a year-end report said. The families included a combined total of 253 children and adults.

Fifty-five of the families became homeless because of eviction, the report said. Just Neighbors also had to turn away 186 families.

A number of the adults in the families Just Neighbors serves are employed, but some don’t earn enough to pay for all of their family’s living expenses, Gale said.

They also need someone to be their voice and to advocate for them with local elected and school officials, he said.

Gale would like to see Just Neighbors evolve into offering a second step for families so they can stay in one location longer as they work to transition back to living on their own. He believes offering the longer stays would benefit children and help break the cycle of poverty. Youngsters can stay in the same school longer rather than switch schools if the family moves out of Just Neighbors and into housing in a different school attendance area or different school district, he said.

He also hopes to build more collaboration with Concordia Theological Seminary and to involve more local congregations in ministering to Just Neighbors families.

Gale appreciates his staff’s dedication and deep care for the community. He also believes the organization’s small size makes it more agile and enables it to be a catalyst for change.

“It’s not all success stories,” Gale added. “People struggle, but you can lift them up.”