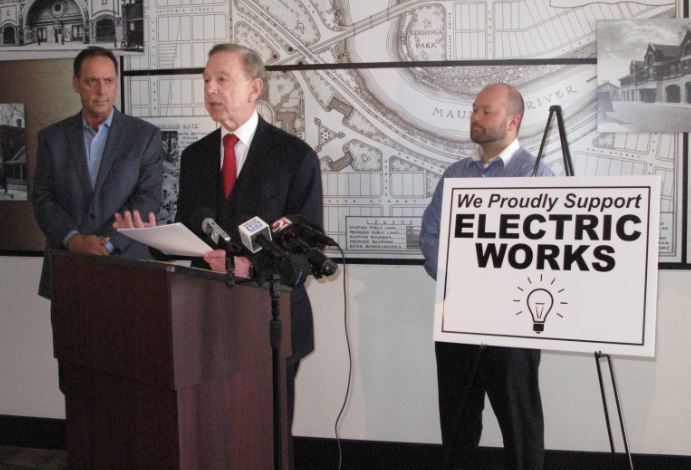 Having pledged $13.5 million in Legacy and local income tax funds to the project, members of Fort Wayne City Council are anxious about the future of Electric Works in the wake of a public letter from developers suggesting it “will not move forward” unless current conditions change.

So council has invited representatives of RTM Ventures to provide an update at Tuesday night’s meeting.

“Way back when they asked to talked to us, but then it got delayed. But we’re very interested in what they will have to say because we have millions pledged and we’re in a holding pattern,” said Council President John Crawford, R-at large.

Many of the financial and leasing deadlines in RTM’s original development agreement with the city have already been pushed back, and Mayor Tom Henry previously told The News-Sentinel he would be willing to grant a further extension if necessary. But Crawford said the delay affects more than redevelopment of the former General Electric campus; it is also affecting other projects that might benefit from those funds currently pledged to Electric Works.

“We hope to hear (from developers) about where Electric Works is now, what their plans are to get (private) funding and when they expect to get a definite answer about whether the project is a go or not,” Crawford said. “It’s not where it needs to be right now.”

A total of $65 million in local public funds has been pledged to the $250 million project, including $45 million in food and beverage taxes approved by the Capital Improvement Board. That money does not become available until the developers meet their benchmarks and close the deal, however.

Crawford, a long-time Electric Works supporter, has previously questioned Mayor Tom Henry’s commitment to the project. But Crawford said he is unaware of attempt by local leaders to undermine its success, as the developers recently suggested.

“The letter was a call to action, a plea for public support,” Crawford said.

Council’s Electric Works update will come on the same night it considers creation of a committee to study how best to spend and conserve Legacy funds made available through the sale of the city’s former electric utility. Because of previous support for Electric Works and other projects, the Legacy fund is close to the $30 million minimum, or corpus, council has said it wants to maintain. That has complicated efforts by Science Central and other entities seeking Legacy dollars.

Crawford, who unsuccessfully ran for mayor in May, said he would support additional delays if the time would help RTM find the private financing and tenants it needs to make the project work.

“I wouldn’t want to kill the deal as long as the developers think it has a chance,” he said.

RTM’s Jeff Kingsbury said the presentation will be “just an overall update on the project: leasing, tax credits, financing, etc.”

Tuesday’s meeting is open to the public and will begin at 5:30 p.m. in the council chamber on the lower level of Citizens Square, 200 E. Berry St.