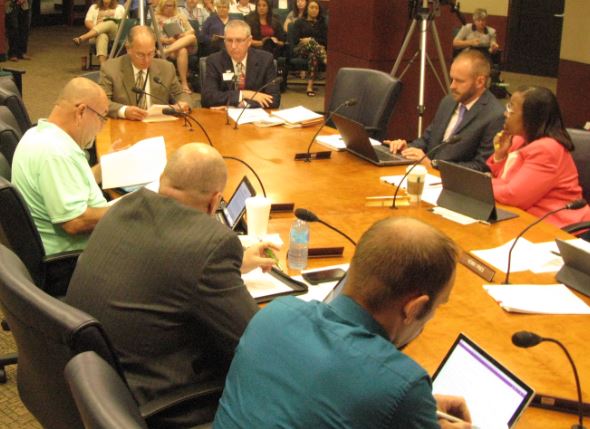 Memorial Coliseum General Manager Randy Brown, at the end of the table on the left, and Visit Fort Wayne CEO Dan O'Connell speak in favor of a proposed hotel tax increase at Thursday's Allen County Council meeting. Council postponed a vote until next month. (News-Sentinel.com photo by Kevin Leininger)

On the same day Fort Wayne’s newest hotel opened, members of Allen County Council appeared likely to defeat a proposed increase in the innkeeper’s tax before postponing the vote until next month.

The Indiana Legislature this year gave the seven-member council the option of increasing the tax on hotel rooms from 7 to 8 percent, which would provide Visit Fort Wayne an additional $750,000 with which to promote local conventions, tourism and sporting events. Visit Fort Wayne currently receives 2 percent of the tax; the Grand Wayne Center the remaining 5 percent.

That is by no means assured, however. At Thursday’s meeting, Council members Ken Fries and Robert Armstrong both said they would vote no, while Kyle Kerley and Joel Benz previously told The News-Sentinel they too opposed the increase. Visit Fort Wayne Dan O’Connell, however, said following the meeting he believes Benz is still “on the fence.”

O’Connell said the increase would boost the cost of a hotel room by about 75 cents but would boost the city’s efforts to attract regional and national conventions and events while boosting use of the Allen County Public Library’s renowned genealogy collection.

“We have a great package for tourists today. I didn’t used to feel that way,” said Tim Hall of Hall’s Restaurants, which also operates the Guest House hotel. “I’ve never heard any belly-aching about the room tax. It’s modest compared to other cities,” he added. The innkeeper’s tax in Marion County, for example, is 10 percent.

Kerley suggested that, with more than 1,000 additional hotel rooms under construction or planned, the current tax could generate an additional $350,000 or more annually — a projection O’Connell challenged. The new rooms will not necessarily be filled without more-effective promotion of Fort Wayne, he said.

Sharon Tucker, the only Democrat on council, suggested she, too, is skeptical about a permanent tax increase but might be willing to consider other ways to help Visit Fort Wayne, possibly through a budgetary line item that could be reviewed every year.

Council members said delaying a vote for a month would give them more time to review the materials and testimony presented during Thursday’s public hearing, which came just hours before White Lodging opened its Hampton Inn & Suites by Hilton Fort Wayne Downtown. The $20 million,136-room hotel is located on West Jefferson Boulevard immediately adjacent to Parkview Field and the Grand Wayne Convention Center.