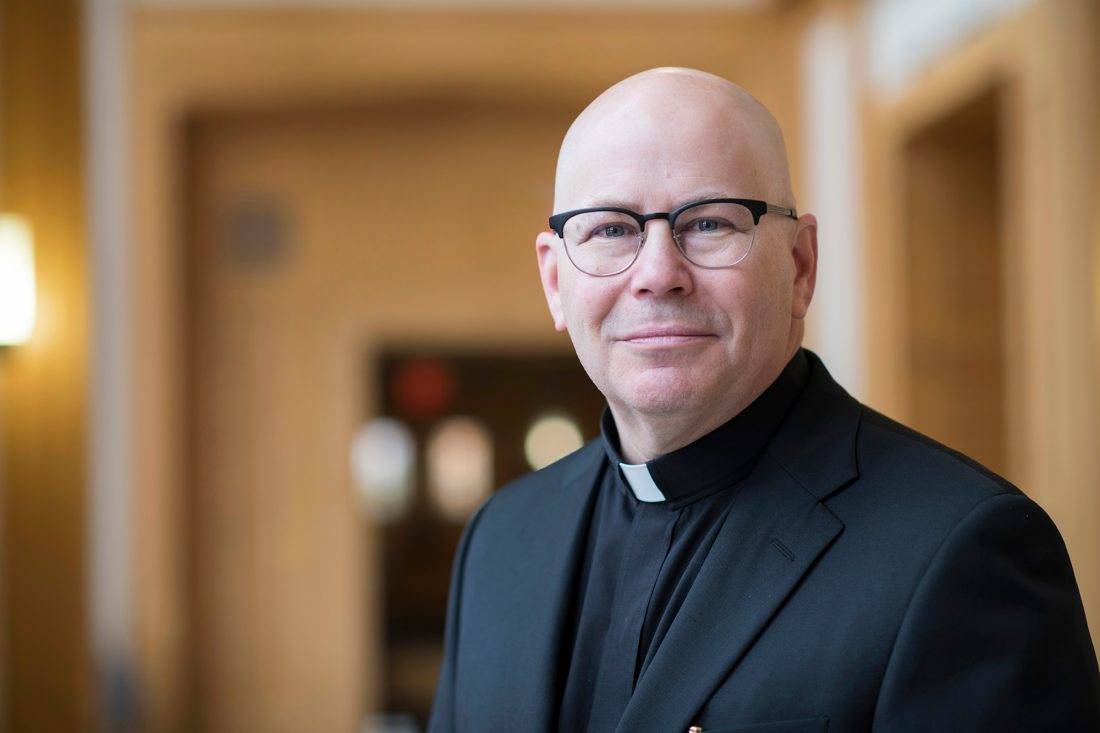 Rev. Dr. Eric Albert Zimmer has been appointed president of the University of Saint Francis, effective July 1. He will succeed Sister M. Elise Kriss, OSF, who will retire after 27 years as president on June 30.

Father Zimmer was appointed by the founding congregation, the Sisters of St. Francis of Perpetual Adoration, working closely with the USF Board of Trustees.

“I take with all seriousness the opportunity to follow in the footsteps of Sister Elise at the University of Saint Francis,” Zimmer said in a statement. “The concern for the whole person, in the Franciscan tradition, consistent with Church teaching on the sanctity of life, extends the vision of Saints Francis and Clare to the present day. I am honored by the responsibility offered to me by the Sisters of St. Francis of Perpetual Adoration. I look forward to serving the university in this time of challenge and hope.”

Zimmer currently serves as associate teaching professor in the Mendoza College of Business at the University of Notre Dame as well as pastor of Saint Patrick’s Church in Walkerton, Ind. He directs the Mendoza College of Business interchange with the United Nations Principles for Responsible Management Education. He teaches negotiation and business communication and his research emphasis includes the adoption of innovation in non-profit organizations and the fundraising practices of non-profits. He has previously worked in higher education at Creighton University, Georgetown University and the University of Washington.

“We extend a warm welcome to Father Eric Zimmer as the next president of the University of Saint Francis,” stated Sister M. Angela Mellady, OSF, Provincial Superior, Sisters of St. Francis of Perpetual Adoration. “Our mission of Catholic higher education has been blessed by so many dedicated administrators, faculty, staff, trustees and benefactors who have partnered with us for 129 years. This marks the first time in our history that a sister will not serve as president. We are grateful to Sister Elise and all those Sisters who have served at the University of Saint Francis since its founding in 1890. It is an honor and a privilege for the Sisters of St. Francis of Perpetual Adoration to sponsor the University of Saint Francis and we are deeply grateful for Father Zimmer’s experience and willingness to serve as our next president. We offer him our heartfelt congratulations and assure him of our prayerful support.”

• Attaché for the Holy See Permanent Mission to the United Nations

• Official of the Secretariat for the Congregation for Catholic Education, Universities Section, the Holy See

“Father Zimmer well understands the challenges facing higher education and I believe possesses the skills necessary to meet those challenges and to advance the mission of the university. Under Father Zimmer’s leadership, the University of Saint Francis will continue to meet the educational needs of our students and remain a beneficial member of the greater Fort Wayne and Northeast Indiana community,” Board of Trustees Chair Bill Niezer said in a statement.

Zimmer has a track record of success in fundraising, finance and investments. He increased Saint Patrick’s Parish revenue by 50 percent in the first 12 months and developed six- and seven-figure capacity prospects for Creighton University. He also assisted in the design of the request for a high eight-figure gift at Notre Dame. He developed the fundraising arm of the National Office for Post-Abortion Reconciliation and Healing.

He is also an innovator and entrepreneur who created Jesuits.net, an international online networking and communication tool for Jesuits. He directed a multilevel national research team for Annenberg Public Policy Institute’s multiyear study on inhibiting effects of anti-drug video messages. As Official of the Secretariat, Father Zimmer directed Vatican oversight of 1,013 Anglophone Catholic universities, ecclesiastical faculties of theology, philosophy and canon law, and affiliated seminaries – 54% of Catholic worldwide institutions, including 216 in the United States.

Zimmer has also spent time focusing on international pastoral ministry and service through long-term service in international communities, including Nepal, India, Chile, France and Italy, and in pastoral care with Omaha’s Hispanic community and New York City’s inner city and Ground Zero communities. He speaks five languages. He is also an avid cyclist and professionally trained bicycle mechanic who biked across the United States in 2003 for Project Rachel.

During the 2019-20 academic year, Zimmer will continue to serve at Notre Dame and Saint Patrick’s Church while Sister Elise focuses on finishing her career as USF president.

“As we work to accomplish the many important tasks before the university this academic year, our focus will be on positioning the University of Saint Francis for the future,” Sister Elise stated. “I look forward to working with Father Zimmer and the Board of Trustees to facilitate a smooth leadership transition during the coming months.”

Founded in 1890, the University of Saint Francis offers more than 70 undergraduate, graduate and doctoral programs through the School of Health Sciences, School of Liberal Arts and Sciences, Keith Busse School of Business and Entrepreneurial Leadership and School of Creative Arts. Approximately 2,200 students from a broad geographic region attend USF.