KEVIN LEININGER: It’s time to flush the Fort Wayne-Huntertown sewer battle once and for all

Brandon Seifert, member and past president of the Huntertown Town Board, believes lingering hard feelings are fueling a dispute with Fort Wayne over the value of sewers at the Allen County Fairgrounds. (News-Sentinel.com photo by Kevin Leininger)
Brandon Almas
Beth Shellman
Russ Jehl
Kevin Leininger

Brandon Seifert, member and past president of the Huntertown Town Board, believes lingering hard feelings are fueling a dispute with Fort Wayne over the value of sewers at the Allen County Fairgrounds. (News-Sentinel.com photo by Kevin Leininger)

When its new $20 million sewage treatment plant opened two years ago, it seemed Huntertown’s long, expensive and often-contentious battle with Fort Wayne’s City Utilities had finally been flushed away.

A dispute over sewers at the Allen County Fairgrounds proves otherwise. But is this a case of lingering hard feelings? Or an attempt by both sides to protect their legitimate interests?

The bureaucratic tug-of-war is over the roughly 2,000 feet of sewer lines and five manholes on the fairgrounds at Lima and Carroll roads, which Huntertown already provides with water service and plans to annex. City Utilities attorney Brandon Almas confirmed earlier this month Fort Wayne is “willing to transfer the assets (to Huntertown) for fair consideration,” but what’s “fair” is in the eye of the beholder, and the two sides seem to be looking past each other.

Huntertown has offered to pay Fort Wayne about $8,000 — a fair price, Town Manager Beth Shellman insists, for $16,000 worth of sewers Allen County government agreed to install in 1990.

Almas, however, has told Huntertown officials in writing that City Utilities “has obtained quotes from two contractors for the cost of the work to install a new service line . . . that supports a current market valuation of at least $123,366. We also believe this valuation methodology has been validated by (state regulators).”

“Going to court is the last thing we want, but this feels like a ping-pong match and we’re at a stalemate,” said Huntertown Board member and past President Brandon Seifert. “We could absorb (Fort Wayne’s price), but we don’t think we should have to pay that much.

“I do think this goes back to our long battle, but these are two great communities and I hope we get past this.”

Before Huntertown’s plant opened, it sent its sewage to Fort Wayne for treatment under a 1985 agreement that was amended in 1998 and 2005. But concerns about capacity and rates caused the town in 2010 to notify Fort Wayne it would terminate the contract and build its own plant. A series of lawsuits between the two followed until a settlement was reached in 2015.

That agreement anticipated the transfer of the fairgrounds’ sewers to Huntertown, but merely requires Fort Wayne to “coordinate” the transfer with Huntertown. It doesn’t say anything about who should pay what to whom.

County Commissioner Nelson Peters said he’s not sure why City Utilities should expect Huntertown to pay for sewers the county paid to install. It appears Fort Wayne never upgraded the 1990 sewers, and any improvements in the future would be the responsibility of Huntertown.

City Utilities officials declined my request for an interview, but in a statement Almas said “The agreement between the city, county, and fairgrounds is the normal protocol by which City Utilities assumes ownership and monetary and operational responsibility for upkeep, maintenance and replacement of an asset as long as the asset is in service. As a municipally owned utility, City Utilities must maintain its assets and protect the value of those assets to our customers. When we consider transferring an asset, we look at the replacement cost to determine current market value and then determine appropriate depreciation, to establish the sale price.”

Steve Shine, attorney for the fairgrounds, declined to comment.

Shellman said she’d like to discuss the issue with members of Fort Wayne City Council but said her first priority is to complete the annexation of the fairgrounds before focusing on the ownership of its sewers. “But if (Fort Wayne) would agree to take $8,000, we’d go ahead now,” she said.

City Councilman Russ Jehl, who has discussed the dispute with county and Huntertown officials and acknowledged previous “bad blood” may be complicating things, offered a sensibly conciliatory note both sides would do well to consider.

“In general, Huntertown and Fort Wayne are right to look out for their interests and ratepayers,” he said. “If they do their jobs fairly and in a professional way, this could be mediated easily.”

Given recent history, that may be overly optimistic, but the sentiment is right even though Fort Wayne’s price seems just a bit unreasonable. With both Fort Wayne and Huntertown appearing to prosper, it’s time to end the great sewer war once and for all. 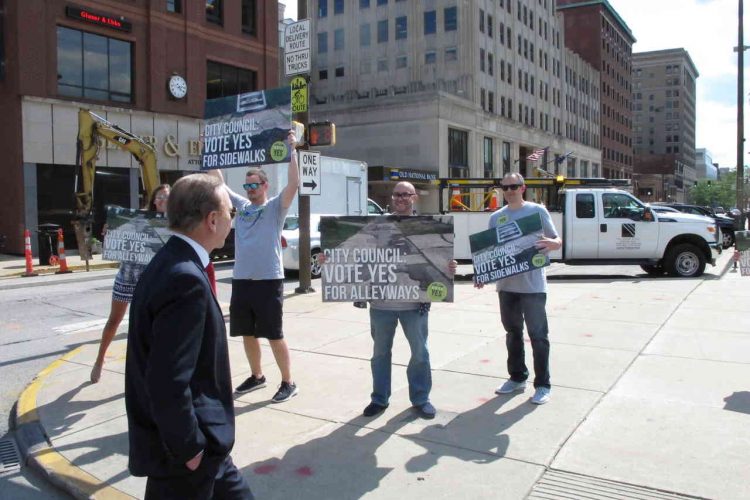