New Aspen Elementary will ease crowding in NACS — for now 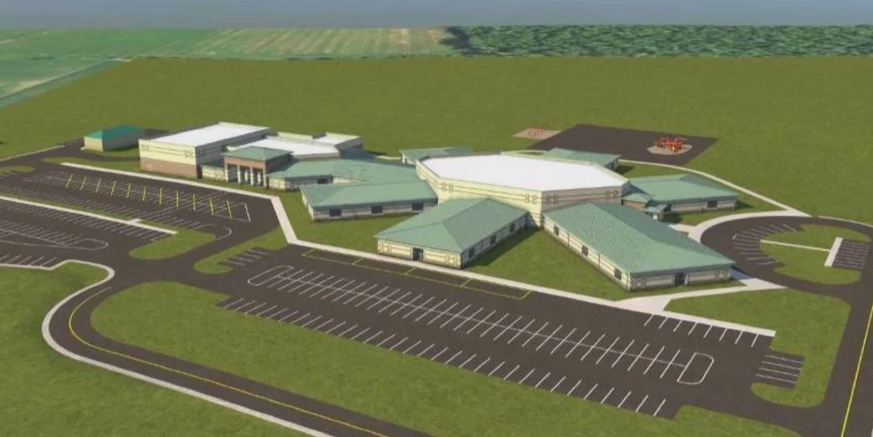 Aspen Meadow Elementary is expected to open in the 2020-2021 school year. (Courtesy image)

With six portable classrooms across schools in a growing district, Northwest Allen County Schools seems to be bursting at the seams. To alleviate the problem, the district is building Aspen Meadow Elementary School on Hathaway Road near Carroll Middle School, which is expected to welcome its first students in the 2020-2021 school year.

The $22 million project has been in the process since fall of 2018, when the referendum for the building was passed with 75 percent voter approval. Bids were awarded 15 months ago, and construction began a little over a year ago.

Aspen Meadow will have the same base characteristics as two other schools in the district, Cedar Canyon and Eel River elementary schools. According to NACS Chief Operations Officer John Miller, this is the least expensive and most efficient way to go about building and design.

“When you build like that, you give the opportunity to the new principal and others involved to say, ‘If you had to do it again, what would you do differently?’ And we can incorporate those differences into the new design,” said Miller.

Each grade will have its own hallway that will house classrooms, making it easier for student travel and teacher collaboration. The hallways will branch off the middle of the building, which will hold the front office and library.

Aspen Meadow’s school colors will be Carolina blue, navy blue, gray and white, with the mascot being a bulldog. The colors and the mascot were all picked by the new school principal, Kim Lochmueller.

Other than Lochmueller, the only staff members picked for the building as of now are the head custodian Shane Lochmueller and front office member Amy Schweitzer. Once the district finishes redistricting, they will then decide how many teachers the building will need.

According to Miller, redistricting has been “fantastic” for NACS, with a lot of help from the community.

“It’s been a very public process. (The community) had a say in what’s important to them and what makes sense,” said Miller.

NACS put together seven groups made up of students, parents, teachers and administrators from representative areas to put together some ideas and give feedback. The plans were very similar, so the district compiled three different plans, which the community voted on through the NACS website or community meetings.

“What we’re hearing overwhelmingly is that people like Northwest Allen County Schools,” said Miller, “Everyone likes where they’re going to school and that’s a great thing to have.”

After the community gives feedback, the plans will move to the School Board, who will have the final say in March whether it will go into effect in the 2020-21 school year.

Miller went on to say that NACS is continuing to grow, and the district is planning on more growth and building more buildings in the future. With new neighborhoods going up all around the district, it’s only a matter of time until the next building is needed.