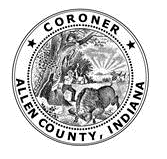 The Allen County Coroner’s office has identified the two people found dead Monday afternoon in a house in the 2000 block of Riedmiller Avenue — an incident declared a murder-suicide.

Responding to calls that newspapers were piling up, Fort Wayne Police entered the house and found Nathan Allen Butler, 61, of Fort Wayne, suffering from a gunshot wound to the head. Medics pronounced him dead at the scene.

During the course of the investigation Donna Sue Taylor, 48, from Fort Wayne, was also found and pronounced dead.

This incident remains under investigation.