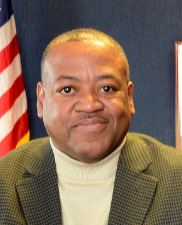 Garry Hamilton became Fort Wayne’s first black police chief in 2014 at a time when law enforcement officers across the country were under fire – sometimes literally – due to shootings of black men.

The Black Lives Matter movement was leading national protests against police departments for racism as well as the rising number of homicides, both here and across the U.S., and the public perception that the killers were not being prosecuted.

“All of the things that were happening around the country, Ferguson, those incidents,” Hamilton said in an interview with The Journal-Gazette. “There was a mistrust in the community with the police departments across the country. We were trying to be as transparent as possible and to work with the people in the community.”

The challenge, he told the newspaper, was combating “that negative history of people of color being abused by police officers.”

Hamilton succeeded Rusty York as police chief following a year in which Allen County had a record 45 homicides – most of them in southeast Fort Wayne, where he grew up.

He took on the challenge at age 52, made his mark on the Fort Wayne community in that role for two years before yielding the job to his assistant, current police chief Steve Reed, and then stepped into a new position, deputy chief of investigations. In that position he could focus on his passion – connecting with the community.

Last week Hamilton, now 57, officially retired after 25 years on the force. And News-Sentinel.com congratulates him on a career well-served and for his dedication to his purpose and to the community he loves.

In a speech Hamilton delivered shortly before stepping down as police chief in 2016, he talked about his goal of building trust between law enforcement and people of color. And he praised the good things police officers do in Fort Wayne, especially building relationships within the community.

He said those relationships must be cultivated with all residents, however, not just people of color, pointing out that the country needed to keep that in mind in the wake of news reports on the deaths of black men and police officers in Dallas and Baton Rouge.

While Hamilton has said the national media coverage has tended to put the negative before the positive in coverage of such police issues, he has praised local media for working with the FWPD to get the whole story.

One of Hamilton’s main goals as police chief was to revitalize the Community Relations Division “to be as transparent as possible and to work with the people in the community,” he told The Journal-Gazette.

He said his love of engaging with the community was behind his stepping down as police chief in order to be more directly involved with the people and organizations in Fort Wayne.

Becoming the city’s first African-American police chief was a monumental step in the right direction for Fort Wayne. When he was appointed, Hamilton said in an interview with News-Sentinel columnist Kevin Leininger, his intentions were to use his authority to make the police force more diverse and sensitive to the often-negative perceptions held by some minorities. He said he believed his race might persuade people previously suspicious of the department’s motives to be more trusting and cooperative.

But he also knew some minorities would expect more from him than he could possibly deliver.

“It is special to be the first black chief,” he said, “but the curse is the expectations from the community. I have heard the comment that I’m a ‘white man in a black man’s skin.’ That doesn’t bother me. I grew up in southeast Fort Wayne, and I know who I am. I have a job to do. I’m going to treat everybody fairly.”

And the consensus is that he did just that. We wish him the best as he steps into the next phase of his life.

NEWS-SENTINEL EDITORIAL: Decision not to prosecute mom was the right one

Justice isn’t totally blind. It was wrong of a grieving mother to attack the woman who killed her children ...

NEWS-SENTINEL EDITORIAL: Public input is key to new All In Allen city-county plan

A News-Sentinel editorial in 2005 lauded the principle behind a joint Fort Wayne-Allen County comprehensive plan ...

THE LAST WORD: Knight’s return to IU touches many

NEWS-SENTINEL EDITORIAL: Do it Best a great fit for Electric Works project

Do it Best Corp. is a superb addition to the roster of Electric Works tenants signed by RTM Ventures in its plans ...

The suspense behind the identity of the proposed anchor tenant of the Electric Works development continues, but at ...