Special to the News-Sentinel 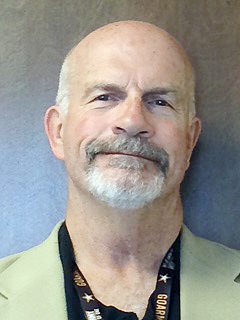 You may have certain expectations as to what you might see when you enter your dentist’s office, but a beautifully framed full-sized American flag might not be on the list. But that is exactly what you will see in the offices of Gebfert-Park Family Dentistry.

Of course there is a story behind it.

Dr. Ryan Gebfert first met Jason Barbneckt while practicing his archery at Sportsman Cove. In this case it was Babneckt’s son Noah that was practicing, from a wheelchair. Archery had been a passion for the 17-year-old young man. But a skiing accident had left him paralyzed. But his love for the sport had not diminished, and Jason was there to support his son as well as help him develop his technique so that he could continue to pursue his passion.

Ryan began a conversation about bowfishing, which as it so happened Jason was a bowfishing guide and as Ryan soon learned ran a guide service known as Gills and Bills.

From this first meeting, Ryan and Jason formed a close friendship, and since both were sportsmen and shared a love for the outdoors, they soon became hunting and fishing companions.

But there was another aspect to Jason’s life that would add another notch in strengthening the relationship between these two men. Jason Barbneckt also serves with the Air National Guard. And what Jason learned about Dr. Ryan Gebfert and what he does in his free time is where the Flag enters the picture.

Approximately six years ago Ryan sought a way that he could lend support to military personnel. It was through his interest that he learned about LHI (Logistics Health Incorporated). It was through this service that Ryan was able to provide professional required dental work to those serving with the Air Guard who were getting ready to deploy overseas.

However, what Ryan experienced during those initial dental examinations left something to be desired. He recalled that the examinations were held at the Bedford National Guard Armory in Bedford, Indiana. He was left to exam patients as he and they had to sit in lawn chairs, and the only light he had to look into the mouths of patients was a camp lantern fitted to a hat. In addition, the x-ray equipment was crude compared to modern standards.

So Dr. Ryan Gebfert approached the LHI administrator about the possibility of doing the exams out of his office so that these airmen who were about to leave their homes and families for unfamiliar terrain could get the best possible care available. The bosses at LHI eagerly accepted Ryan’s offer. Soon enough, these airmen started arriving at the Gebfert-Park offices off Auburn Road to get proper dental screenings and treatment. In addition, if such treatments exceed the expenditure limits set by the government, then both Dr. Gebfert and his partner Dr. Park will provide what is needed to be done at their expense. As Ryan explained it, “If I see there could be problems before their deployment, I want to get it corrected. These are good people who we ask to serve their country and they deserve the best we can offer.”

So upon learning about his friend’s support to those who serve, Jason helped to coordinate the presentation of the American Flag. A plaque from The United States Air Force that describes the importance of the flag and the event reads as follows:

This American flag was flown in the skies of Afghanistan on a combat mission aboard the feared A-10C Warthog, assigned to the 163rd Expeditionary Squadron, Kandahar Air Base, Afghanistan. Operation Freedoms Sentinel, Flown in Honor of Ryan Gebfert

With all the news focusing on this countries’ political animus circulating across the media, the story of Ryan and Jason deserves to be heard. Our American flag does mean something special, and according to Dr. Ryan Gebfert “There’s a lot more good that happens because of America than bad”.

Bob Rinearson is a resident of Fort Wayne and worked 38 years in both educational and correctional settings in areas of student management and security.