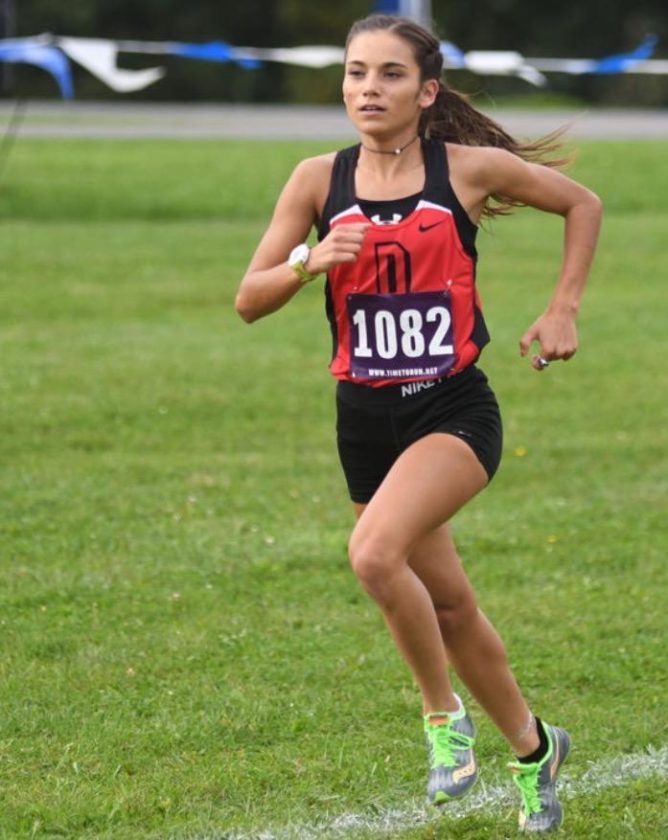 Schwartz, the defending state champion, finished third in the 2017 IHSAA race in a time of 18 minutes, 7.9 seconds, well behind Greencastle’s Emma Wilson, who won in 17:45.9.

Not one to make excuses, Schwartz was dealing with a calf issue that especially flared and caused pain when she ran uphill.

“Stepping back, we didn’t realize how bad her calf was,” DeKalb coach Wade Buchs said. “There were a lot of emotions that day, a lot of tears. …When the calf is healed up, you’ll see the confidence back in Tyler Schwartz.”

Time heals, physically and mentally. Schwartz was disappointed in her state finish, and in some of her later-season runs, but it’s hard to argue with the results she produced despite the pain. Schwartz won the sectional, regional and semistate races. She also ran the fastest time in the state this season, winning in 17:19.1 at the FlatRock Invitational on Sept. 16 at Carmel.

For all of those accomplishments, Schwartz is The News-Sentinel 2017 Girls Cross Country Runner of the Year. She earns the honor for the second-straight season.

Schwartz is starting to see the bright side of her season as she takes a step back to heal and regroup for indoor track this winter and outdoor track next spring.

“I was happy with my new PR of 17:19 and for making it to state with my teammate Lauren (Beckmann) and for the chance to compete in all-stars,” she said.

Another major milestone for Schwartz this season came in her decision to continue her running career at Bradley University next fall.

“I always thought a Big Ten school was the place to be, but then I got connected with them,” Schwartz said. “After they sent me hand-written letters and we talked on the phone once a week, the more interested I became. I really made my decision because of the coaching.”

Schwartz’s experiences in dealing with both injury and disappointment should bode well for her to be even more resilient moving forward, her coach said.

“She was winning races (before state) but not winning them confidently,” Buchs said. “When she didn’t win, the world didn’t stop. She had an off day and got third. I think she realized everything is going to be fine. I see her in a much better place now.”

The one thing her state disappointment didn’t do was rob Schwartz of her love for cross country.

She played soccer and softball in her early athletic days, but decided to concentrate on running once she was at the middle school level.

“I like cross country because you’re not on the track running laps and laps,” Schwartz said. “You get to see different things. Adding hills is a plus and I’m decent at hills. The longer the race, the better I am at it.”

Schwartz said while she is looking forward to college, she has some unfinished business to tackle in her final high school track season. Schwartz won the 3,200-meter run at the sectional and regional level last season. But she came down with strep throat prior to the state meet and had to drop out after five of the eight laps.