Notre Dame football recruiting ‘busier’ this month than in past 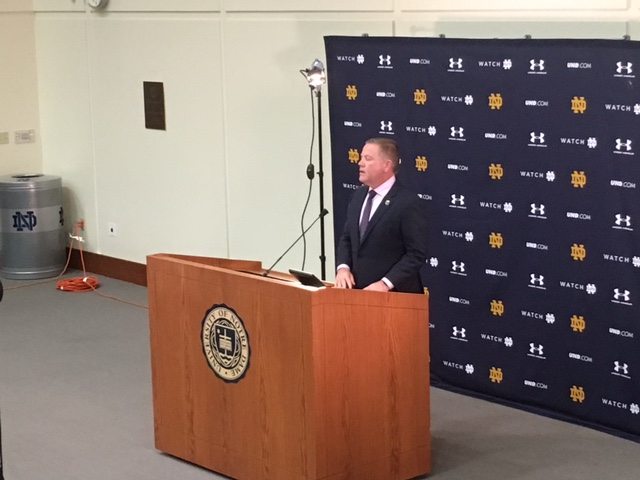 Notre Dame began preparation for its upcoming Citrus Bowl game with LSU this past weekend, but the Fighting Irish coaching staff has been far from singularly focused over this week.

Following his team’s loss at Stanford last month to close the 2017 regular season, veteran Irish coach Brian Kelly spent time recruiting in California before scouring the rest of the country to solidify the 2018 class in recent weeks.

His work – as well as that of his assistants – has been particularly evident this week, as Notre Dame secured verbal commitments from three players.

The twist to this recruiting cycle is the fact that athletes can sign earlier than ever before in the early signing period which runs from Wednesday to Friday next week.

“It’s busier now,” Kelly said recently of the month. “I think what it will do is it will allow us to focus on (class of 2019) more in January than we have in the past.”

The Irish got commitments from cornerbacks Tariq Bracy (Sunday) and Houston Griffith (Tuesday), while bolstering their offense with a pledge from Georgia tight end Tommy Tremble Thursday.

That brings the Notre Dame commitment list to 20 athletes, 12 on the defensive side of the ball and eight on the offensive. The class is currently rated as the sixth best nationally by 247sports.com.

Kelly said that he expects any athlete that has verbally committed to his program to sign their national letter of intent next week or their pledge doesn’t hold much weight.

If one of the 20 players elects not to sign, Kelly said that he would not stop recruiting them, but he wouldn’t consider them part of his program until they did sign, which following next week, can be done between February 7 and April 1, 2018.

“If you don’t sign in December,” Kelly explained, “you’re not committed and we’ll have to keep recruiting you.”

Thus far, the Irish have gotten commitments from five defensive backs, four linebackers, three defensive linemen, while on offense Kelly has secured pledges from a pair of linemen, a couple of tight ends, two wide receivers, a quarterback and a running back.

In addition to those athletes, it is expected that offensive guard Quenton Nelson will declare for the 2018 NFL Draft, in which he is expected to be a very high selection.

More players could declare for the draft or elect to graduate and/or transfer, so it remains to be seen just how many new players Kelly will bring in.

“It frees up that time I’m normally on the road in January,” Kelly said of getting early letters signed, “chasing these guys down for a February signing (in order) to really focus on 2019 (and) then the remaining spots that we have left.”

“So it is busier now, but I think it’s worth it because it allows us to be ahead of the game as we move through January.”

Here is a current list of athletes that have verbally committed to Notre Dame for 2018.