Next step in building, sustaining Notre Dame football to be taken 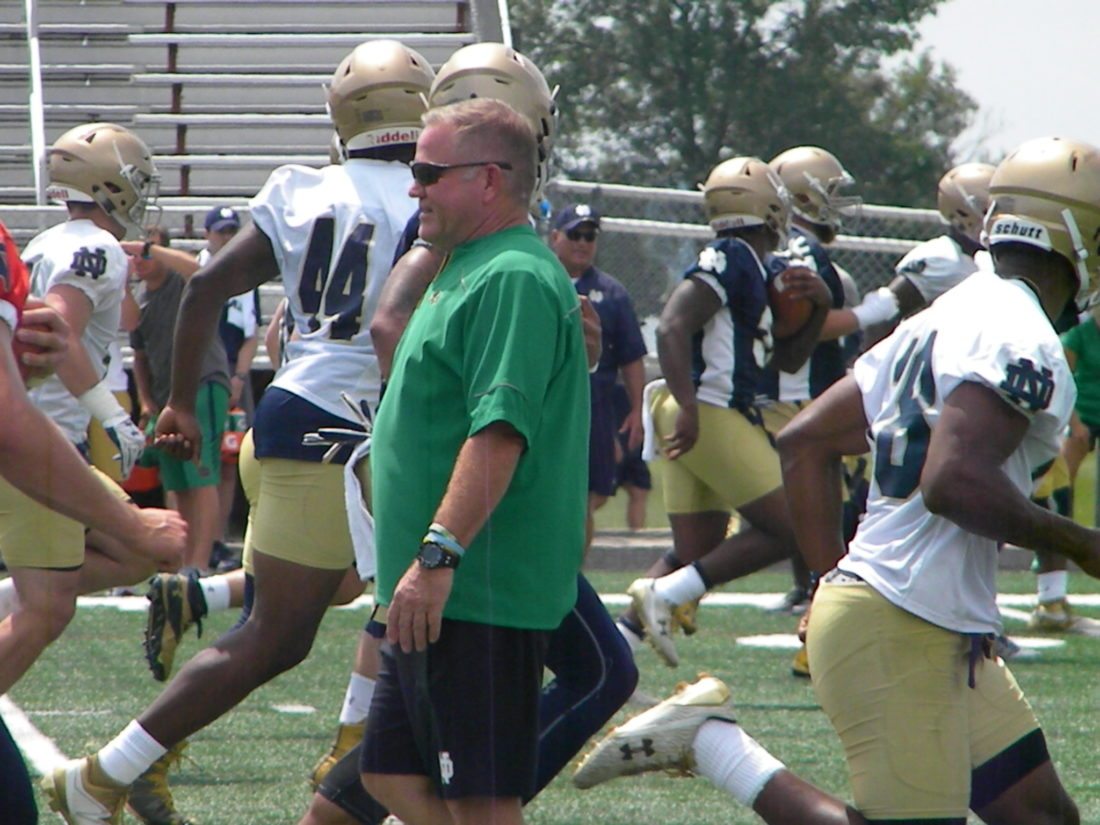 Notre Dame football coach Brian Kelly watches his team prepare for a practice during training camp in August at Culver Academy. (By Tom Davis of News-Sentinel.com)

It was one year ago exactly that Brian Kelly went about the reconstruction of his football program.

“Any time that you have a shift within your program,” Kelly said last month, “the only way that you can go about and really lay down your mission is that it has to be sustainable. So sustainability starts with what your mission is, and that is to graduate all your players and play for a National Championship.”

Three losses for the Irish this season were probably two too many to accomplish the latter part of that mission, but on Wednesday, the Fighting Irish are hoping to enhance their opportunities to compete for a title somewhere down the line.

Notre Dame will secure signatures from upwards of 20 student-athletes today as part of the initial national signing day.

The NCAA altered the opportunity to sign a letter of intent for the 2018 class by adding a three-day window (Wednesday through Friday) to the regular period (February 7 to April 1, 2018.

“I like it,” Kelly said last weekend of the new period. “From our perspective, it has allowed us to really identify those that want to be here at Notre Dame and make that decision.”

RELATED STORY:Notre Dame football recruiting ‘busier’ this month than in past

As happens during this time of year, young athletes can waver on their “commitments,” and that happened earlier this month to the Irish.

Cathedral High School runner Markese Stepp and California high school wide receiver Geordon Porter both decommitted from the Irish after earlier pledging to join the program, however, the Irish are back in the running for Oregon high school receiver Braden Lenzy, who once was committed to the Irish, but decommitted and said he was going to Oregon. However, once Ducks coach Willie Taggert left for Florida State, Lenzy was back in the recruiting race and the Irish are in the mix for him.

“(On Wednesday),” Kelly said, “it will show that all of the work that we did leading up to (Wednesday), those guys that made commitments to Notre Dame, are going to follow through with that.”

Kelly said that his liking the new period will be contingent on Wednesday being a success for his program.

“For me to stand here and say the (early period) was great and then 10 guys don’t sign, then obviously it wouldn’t be great to have that date,” Kelly explained. “But I am very confident with the work that we’ve done.”

Past Friday, there will still be some recruiting being done on 2018 athletes that chose not to sign just yet, but Kelly said with the majority of players already in the fold, he and his coaches can turn their attention to 2019.

“Wednesday is going to prove to be a really good day for Notre Dame football,” Kelly said, “in that, all the work that we did leading up to getting these guys signed and committed to Notre Dame is going to leave us with the opportunity to start looking towards just a few players that need to be signed in February and moving ahead in the calendar in 2019 and 2020.”

Strong recruiting will be the macro approach to getting Notre Dame football back to national relevancy on a consistent basis, according to Kelly. However, there is also a daily component to achieving that success.

“To build the traits on a day-to-day basis that will help get you there,” Kelly said the daily focus of his staff and players on improving. “That’s the sustainable piece, building those traits amongst our players.”

“The rest is business as usual, right, recruiting, recruiting the right kind of players to Notre Dame, having the right coaches in place, strength and conditioning, offensive coordinator, defensive coordinator, special teams, all those other things, as well. But it starts with the sustainability is really your mission, and then how are you building towards that mission.”