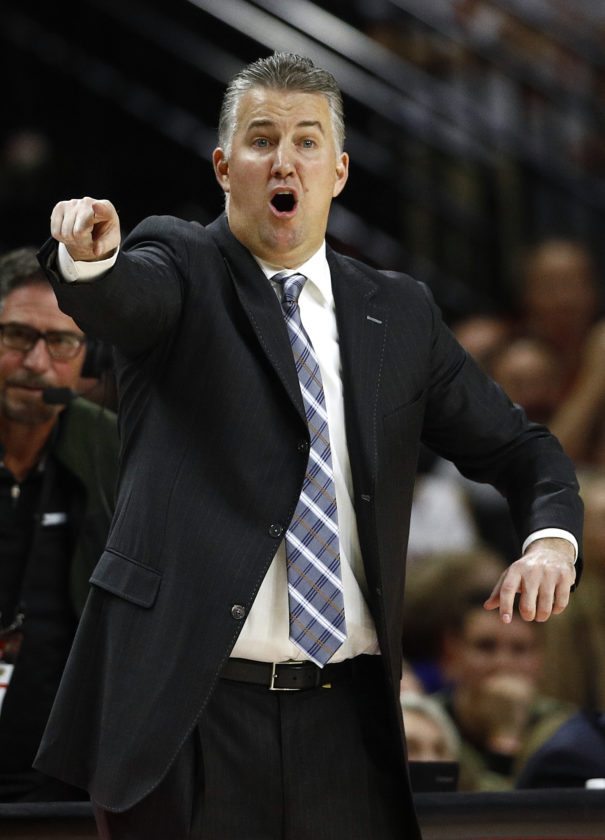 Purdue men's basketball coach Matt Painter directs his players in the second half of a game against Maryland in College Park, Md. earlier this season. (By The Associated Press)

You can forgive the Purdue fan base if it found the Boilermakers’ 82-51 men’s basketball victory over Rutgers Wednesday at Mackey Arena a bit mundane. After all, winning a game, particularly in West Lafayette, is routine for this program.

Not that that is a bad thing.

“Anytime that you win it’s fun,” veteran Purdue coach Matt Painter said recently. “You are miserable when you lose and it’s fun when you win.”

The Boilermakers have had a lot of “fun” over the past 14 seasons when Painter returned to his lead his alma mater, and there is little reason to believe that the euphoria won’t continue for another 14 years, or as long as Painter continues to work in Mackey. That is precisely why now is an opportune time to re-work Painter’s contract to ensure that he’ll be the Boilermaker coach for the remainder of his career.

Painter is as good of a coach and as good of a representative of Purdue as the university could possibly find, so taking the steps to ensure that he remains in West Lafayette for his professional eternity is an obvious one.

In the summer of 2016, Painter re-signed his existing contract to take him through the 2021-22 season, which will near his 52nd birthday. What I propose is that the Boilermaker leadership add another eight seasons to the current deal (as well as adding a massive and prohibitive buyout clause) with a university option following the 2024-25 season to add an additional season over each of the final five years of the deal.

Such a contract would keep Painter employed at the university through his 65th birthday.

“I think that it is a lot more fun when you reflect on things,” Painter said of his program’s current success, “instead of being a part of it and being in it.”

You can look up all of the numbers that Painter has amassed during his tenure and see why my opinion is valid, but I find his qualities range far from those obvious statistics.

Yes, he has been nominated or been awarded various Coach of the Year honors 20 times in his career, but what I appreciate is his candidness in dealing with the media.

If you want to know how Painter really feels on a topic, it’s not difficult to learn, you simply need to ask him.

A few years ago, when his program had taken a downturn and slumped to consecutive losing seasons, Painter didn’t mince words when he said that one of his young players (Rapheal Davis) was often demonstrating the best attitude and work ethic within his program and not his veterans.

Yes, Painter is 10th historically in quickest to reach 300 victories, topping legendary coaches such as John Thompson, Bill Self, and Bob Huggins, but what I appreciate is the fact that he has not just rebuilt the Boilermaker program, but he’s done so twice.

His initial season in West Lafayette, Purdue labored to a 9-19 record. However, over the next four seasons, Painter’s teams averaged almost 26 wins per year, the last of which resulted in a Big Ten championship.

After going 31-35 from 2012 to 2014, Painter recruited this current senior class, which has become the winningest program in conference play since.

“We do have a good group of guys,” Painter said.

Aside from his brutal honesty, perhaps my favorite trait of Painter is the fact that he worked to get where he is. From a professional standpoint, nothing was ever handed to this guy.

Painter spent 11 years grinding as a coach at outposts such as Washington, Penn., Wilson, N.C., Charleston, Ill., and Carbondale, Ill. before landing the opportunity at Purdue, which he never dreamt of occurring.

“So you have a career and you start your career, that’s how I started my career. What if he doesn’t go to North Carolina? How does my career end up? So things happen.”

Painter spoke Wednesday in regard to his team and said “you’ve got to keep them fighting. You can’t celebrate things,” and perhaps people would make that argument in not rewarding Painter with such longevity. However, this program is a special one and it is led by a unique and talented coach and that is reason enough for celebration.

Purdue needs to maintain that positive mojo and keep Painter in the fold forever.

This column is the commentary of the writer and does not necessarily reflect the views or opinions of The News-Sentinel. Email Tom Davis at Tdavis@news-sentinel.com.