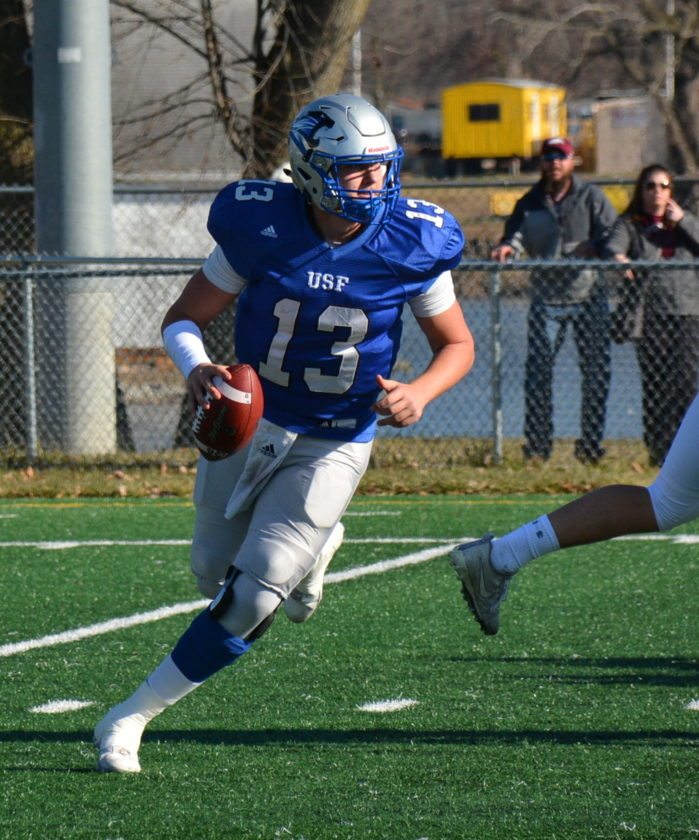 Saint Francis quarterback Nick Ferrer rolls out, looking for a receiver, during the team's NAIA semifinal win over Morningside on Dec. 2 at Bishop D'Arcy Stadium. (Photo by Reggie Hayes of news-sentinel.com)

Ferrer heads out this month on a football journey through tricky terrain. He’ll work to prove to scouts he can play quarterback at the NFL level. He’ll face skepticism, due to spending his college career at the NAIA level, where he helped the University of Saint Francis to consecutive national titles. Small-school stigma is real.

Those scouts would do well to forget the size of Ferrer’s college and discover the expansiveness of his talent.

He’s 6-foot-4, 230 pounds. He has a pro-level arm. He understands the game in a way that would make him a perfect fit in any quarterback room. A practice-squad quarterback with insight can be a valuable commodity.

“The goal for me is to be a free-agent signing (after the April draft) and get a contract where I can stick around for a camp,” Ferrer said. “I want to get a legitimate look and a legitimate shot. No matter what, I have to stay positive with it. You can be with somebody one day and somebody else the next. You have to focus on what you can control.”

Ferrer finished his Saint Francis career with school records for passing yardage, touchdowns (second-most in NAIA history) and total offense. The final three years of his career, Saint Francis was 38-2 and won two national titles. He left with 23 straight wins over the final two seasons.

The Cougars (14-0) completed a wire-to-wire season as No. 1 as Ferrer threw for 270 yards and a touchdown in a 24-13 win over Reinhardt in the NAIA championship game Dec. 16 in Dayton Beach, Fla. Ferrer was named 2017 NAIA Player of the Year the night before the game.

“He can play anywhere,” Saint Francis coach Kevin Donley said. “He has the arm. He has the size. When the Buffalo (Bills) guy was in, he said the biggest part he was impressed by was the mental part of the game. He’s so intelligent. He would be an asset to any football team in the NFL.”

Donley talked to a few NFL scouts over the course of the season, and said he has put the word out on Ferrer as much as he can.

“I have all the confidence in the world in myself and the big thing about it is, I have confidence that I can make other people around me better,” Ferrer said.

Ferrer will begin his quest for the NFL in earnest by participating in the 2018 College Gridiron Showcase from Saturday through Wednesday in Addison, Texas. Former Saint Francis receiver Seth Coate attended the event last season, and that helped him earn training camp opportunities.

Ferrer is also scheduled be part of the Dream Bowl, which takes place Jan. 11-15 in Salem, Va.

Sports agent Harold Lewis also has helped Ferrer move into position for a possible invite to the East-West Shrine Game in St. Petersburgh, Fla., or the NFLPA Bowl in Pasadena, Calif. Both of those are on Jan. 20. Ferrer is on the wait list for both events, meaning he could land an invite if another quarterback drops out.

With Ferrer’s last semester at Saint Francis starting Jan. 16, he’ll be working around his academic schedule, too.

It’s a busy month, and a busy spring ahead. Ferrer will train with AWP Sports as he preps for what he hopes are more opportunities ahead. He will eventually participate in a Pro Day, likely to be at Ball State University.

“The big thing is having scouts watching me make throws and do drops and play with big talent,” Ferrer said. “There’s a big stigma coming from a small school and not playing against Power 5 competition, so I’m excited to play against those type of players and showcase that.”

Ferrer had few offers to play college football coming out of Westfield High School, eventually deciding on Saint Francis. He played as a freshman and then led the team to its best stretch of success his final three years.

“I was one of those kids who kind of grew into myself and didn’t become a good player or a great player until college,” Ferrer said. “Coming out of high school, I hadn’t grown into my body. I wasn’t looked at enough to get a Division I scholarship. I had to develop and become the player I am.”

Ferrer has arm, will travel.

All he needs now is for one NFL scout to take a closer look, and see his pro skills.