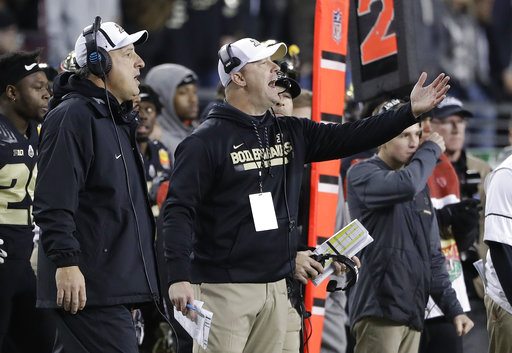 Purdue coach Jeff Brohm, center, yells from the sideline during Purdue's win over Arizona on Dec. 27 in the Foster Farms Bowl in Santa Clara, Calif. (Photo by the Associated Press)

Brohm landed his most significant recruit yet on Saturday, when Louisville Trinity High School receiver Rondale Moore announced, live on NBC during the U.S. Army All-American Bowl, that he will join the Boilermakers for his college career.

“Boiler up,” Moore said, picking up and putting on the Purdue hat.

No matter how you look at it, that’s a huge win for Purdue.

In past years, the Boilermakers were in no position to compete with the big boys of college football. The idea that a recruit would choose Purdue over Ohio State, Alabama or Florida State was a fantasy the most optimistic Purdue fan couldn’t have fathomed.

Moore’s announcement led to all sorts of social media debate from fans of the other schools over the veracity of Moore’s offers from Ohio State, Alabama and Florida State. Some of those were the typical sour grapes responses of the “we didn’t really want him” variety.

Recruiting website 247Sports.com lists Ohio State and Alabama among the schools who offered Moore, but not Florida State. There’s no doubt Moore is a coveted recruit, with over 30 offers. He previously committed to the University of Texas before changing his mind and reopening his recruitment. Texas has been known to play some big boy football.

Here are the undisputed facts: Moore caught 109 passes (second-most in state history) for 1,478 yards and 16 touchdowns, rushed 50 times for 537 yards and seven touchdowns and returned two punts for touchdowns. He was named the Gatorade Kentucky Player of the Year and won the Louisville Quarterback Club’s Paul Hornung Award as the state’s top player.

“He’s one of the most athletic receivers in the country,” 247Sports director of recruiting Steve Wiltfong told the Lafayette Journal & Courier.

Brohm has a connection with Louisville Trinity, having played quarterback for the school when he was in high school. Louisville is Brohm’s hometown, his most-familiar territory. He’s comfortable recruiting in Kentucky, after his years as Western Kentucky coach, with Moore becoming the fifth Kentucky recruit in the Boilermakers’ 2018 incoming class. Purdue had 22 players sign letters of intent during the first signing period last month. Moore can make his decision official in February.

Brohm’s forte is building and fielding a potent, explosive and unpredictable offense, something that was on display in the Boilermakers’ 38-35 win over Arizona in the Foster Farms Bowl last month. But those plays were primarily from returning players Brohm did not recruit.

Moore is the first four-star (as determined by 247Sports compilation of rankings) to choose Purdue during this recruiting period.

At 5-foot-8, 175 pounds, Moore’s size is a concern. But he has the speed and skill set to be an immediate impact player.

Moore has told reporters he believes he can play effectively as a slot receiver at Purdue. Given Brohm’s creative offense, he’ll find ways to get his top playmakers the football.

One look at Moore and you’ll likely think, “That’s a small player.” You would be right literally, but wrong figuratively. Moore is the biggest recruit Brohm has landed yet. “Yet” is the operative word.