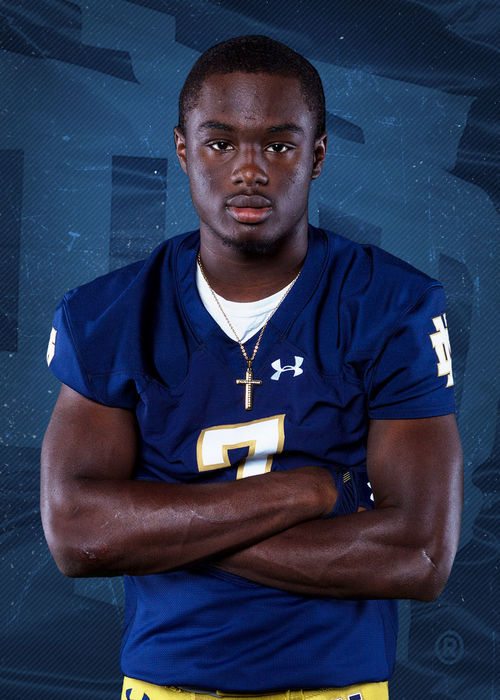 News-Sentinel.com sports reporter Tom Davis has been writing on the Fighting Irish for nearly two decades and is taking a daily look at each recruit leading up to the traditional National Signing Day (Feb. 7).

Here is the second of the 21 recruiting profiles:

Oghoufo is one of seven early enrollees within the 2018 Notre Dame recruiting class. The Michigan native helped Harrison High School (Lathrup Village) to 11 victories and a runner-up finish in the Division III state finals.

Oghoufo played both ways (he excelled as a receiver), but needs to gain weight (he weighs just 208 pounds) before getting into the mix at linebacker.

Oghoufo brings athleticism to the field, as well as versatility. The Notre Dame coaches can line him up in a variety of roles and spots on the field and he can move laterally well enough to defend well.

He can cover backs on routes, as well as be a speed-rusher off the edge when the Irish blitz from the linebacker position.

The 6-foot-3 athlete made over 100 tackles as a senior, including 31 for a loss and 11 sacks, but he also caught 32 passes and scored seven times offensively.

RELATED STORY:Notre Dame recruits to take field today with some of nation’s best, if not all

RELATED STORY:Notre Dame adds ‘best QB in the country’ for 2018

Oghoufo was regarded highly enough to be invited to “The Opening” evaluation event in Oregon prior to his senior season and is rated as high as the ninth best player in the state of Michigan.

Both 247Sports and Rivals rank him as the 36th best outside linebacker in the entire country.

Two things will slow Oghoufo’s ability to get on the field, his weight and the amount of depth that Notre Dame has at the linebacker position, though Irish coach Brian Kelly said that the linebacker recruits will get consideration for playing time early.

The Irish didn’t have a linebacker on the depth chart under 230 pounds, which is 22 more than Oghoufo weighs, so the fact that he has enrolled early and is already immersed in Matt Balis’ strength program is a huge advantage for him.

The Irish did graduate starters Nyles Morgan and Greer Martini, but Te’Von Coney and Drue Tranquill both return, as well as depth in Jamir Jones, Asmar Bilal, Jeremiah Owusu-Koramoah, and Jonathan Jones.

“You can see that they are not just box players,” Kelly said of signees Jack Lamb and Oghoufo on National Signing Day. “They can play outside the box. They are guys that are extremely athletic. We would rather take them and then begin to hone in on where they can best fit in that defensive structure, rather than saying ‘He’s a box player and that’s all he can play.'”

“These guys give us some flexibility to see how they’re going to fill out and develop.”