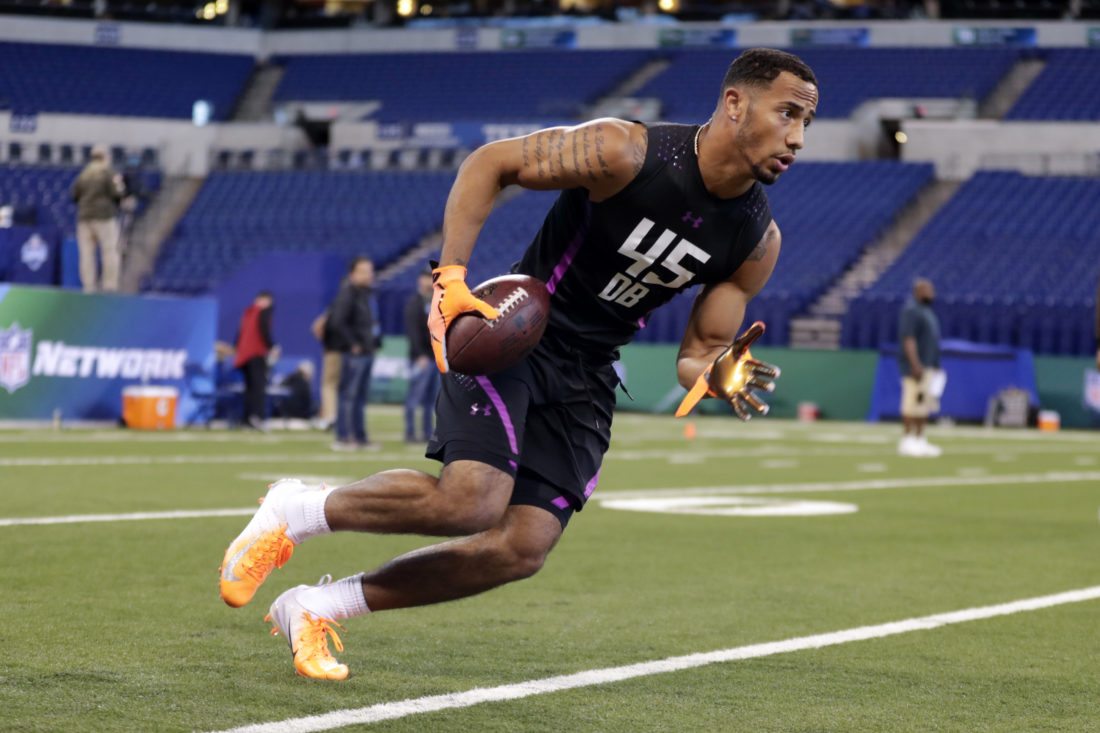 Wake Forest defensive back Jessie Bates runs a drill at the NFL football scouting combine in Indianapolis on March 5. (Photo by the Associated Press)

One of Jessie Bates III’s best attributes off the football field is his honesty.

I asked the former Snider High School standout if he had been trying to avoid the media attention – primarily positive – about his NFL Draft status since his strong performances at the NFL Combine and his Pro Day at Wake Forest University.

“Before, I was staying away from it,” he said Monday. “But now, I’ll get some reports from my family and what they’ve read and I’ll look at it. I’ve been reading about other guys for years, so it’s pretty cool to see my name in those articles. I don’t let those go to my head too much.”

Given his level-headed reputation, that shouldn’t be a problem. But the news about Bates leading up to the April 26-28 draft keeps getting better. After leaving Wake Forest after his redshirt sophomore season at safety, Bates was considered a third-round, possibly second-round draft pick. But his stock seems to be on the rise.

One NFL.com analyst, Daniel Jeremiah, even has him getting a first-round look.

Bates gained some further attention prior to Wake Forest’s Pro Day when he was spotted having dinner with Pittsburgh Steelers coach Mike Tomlin and general manager Kevin Colbert.

4 Years ago, Jessie Bates was rated the #124 Safety propect in the nation coming out of high school. Last night he dad dinner with Steelers Head Coach Mike Tomlin. He's about to be a early round draft pick.

This is what hard work and development can do! ???? https://t.co/5gNRP9GnTC

Bates said he has had dinner with other NFL position coaches, but Tomlin is the only head coach.

“It was my first time having dinner with a head coach, which was an awesome experience,” Bates said. “I was able to ask him questions and he responded in a very realistic and honest way, and I think that was pretty cool. I remember watching Mike Tomlin on the sidelines plenty of times and now he’s looking at me and watching my film.”

Bates understands there’s no way to predict which team will eventually call his name, nor when it will happen, in the draft. He said he talked to a representative from almost every NFL team during the combine March 5 and had 10 formal meetings at the combine. Twenty-eight teams attended the Wake Forest Pro Day on March 12.

Bates said he felt he performed well and earned more NFL interest through both the combine and the Pro Day. He was able to run a 40-yard dash time between 4.47 and 4.5 in both venues, which is great for his resume.

“I was able to show my footwork and my ability, whether I’m playing corner or safety,” he said. “I think my footwork was definitely a strength.”

Bates also said he felt he has done well in interview sessions with coaches and other NFL personnel.

Among the teams mentioned in various reports as having interest in Bates are the Steelers, Eagles, Cowboys, Chargers, Chiefs, Seahawks and Falcons. But, again, there could be a team very interested that is working hard not to reveal that information prior to the draft.

“It’s funny, my family gets so excited to see all the articles,” Bates said. “My response is, I know I have no clue. The draft process is so unpredictable. They’re really excited, and I’m OK with that, but they have to understand I have no clue what’s going to happen.”

Bates tells it like it is, and his honesty is among the many assets he’ll bring to the table as teams try to decide if he’ll be a good fit when draft day arrives.