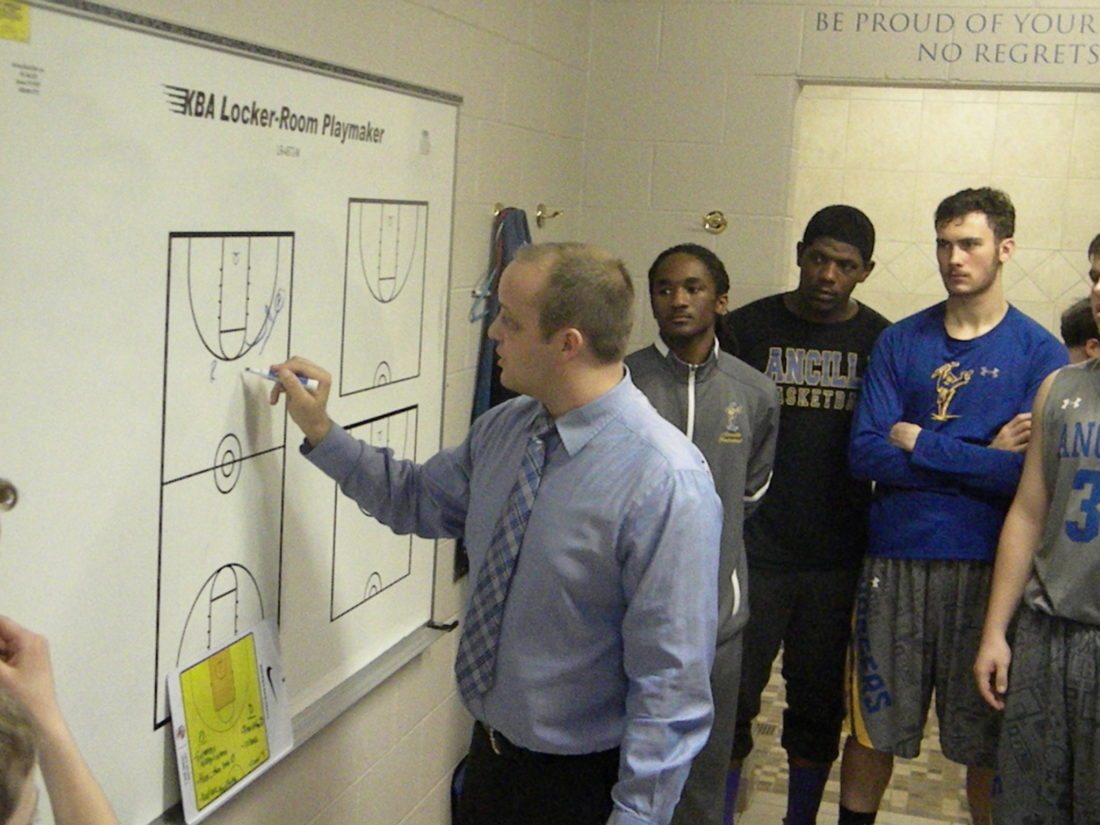 Ancilla College basketball coach Aaron Butcher talks strategy with his team during halftime of a game in Plymouth earlier in his career. (By Tom Davis of News-Sentinel.com)

As Aaron Butcher walked to his car following his recent job interview with the leadership of Northern Oklahoma College, his mind began to play tricks on him.

He knew that the position of men’s basketball coach at the Enid, Oklahoma institution was a fantastic opportunity, but because it was such a great job, Butcher also knew a lot of highly-successful coaches would be in pursuit of it.

Truth be told, he wasn’t the most confident guy as he began the long trip back to northern Indiana.

“I know that it sounds crazy,” Butcher told News-Sentinel.com Wednesday, “but I heard a voice that said ‘This is the place.'”

The hairs on the back of Butcher’s neck rose to attention and at that point, he didn’t know what to think.

Butcher was hired Wednesday to guide the NJCAA Division I program and if you think he is crazy for believing that divine intervention played a role in his landing with the Jets, then you don’t get Aaron Butcher.

What others look at as delusional, Butcher only sees as a challenge.

“As a family,” Butcher told News-Sentinel.com, “we’re really excited to get out there and become part of the Enid community.”

Butcher has spent the past six seasons performing miracle after miracle at Ancilla College and if you want to talk about crazy, then you should consider what the Chargers achieved under him.

When the Wabash High School graduate took over the Charger program, it had advanced to postseason play just twice in its previous 23 years. Under Butcher, Ancilla has achieved that in every one of its past five seasons.

“We did accomplish a lot here,” Butcher said, “and we’re very proud of that.”

As he should be.

It isn’t hyperbole to say that Ancilla is a difficult place to succeed.

Not only didn’t the Chargers have an on-campus facility to play or practice in, but Ancilla is located miles off of any highway and amidst corn and bean fields. To call it remote doesn’t do that word justice.

“We took over a program that really had never had success,” Butcher said.

That is an understatement.

The truth of the matter is Butcher was interested in one of the most challenging coaching jobs – at any level – for two reasons:

• He had played at Ancilla and thought he could use that to sell his experience to recruits, and

What Butcher ultimately did with the Charger program defies logic (some might even refer to it as crazy).

Told by the Charger administration early on that aspiring to be a .500 program within its league was admirable and at the far-end of rational, Butcher proved to be – well, crazy – because he wanted more.

His first recruit was South Bend guard Juwan Johnson, who not only was good but signing him brought the Charger program credibility with other athletes throughout northern Indiana.

After struggling to an eight-win season in his first year, Butcher led Ancilla to 13 wins (10 in the Michigan Community College Athletic Association) and a postseason berth.

The next year, the Chargers finished 17-13 and any thought of being a losing program was… crazy.

The Chargers won 75 games over the next three seasons, which culminated with a 29-3 record this year. Oh, and just for the record, Ancilla won 17 of its 18 MCCAA games.

For a large portion of this season, the Chargers, who few talented players ever envisioned playing for, were ranked number one in the nation at the NJCAA Division II level. Butcher leaves the program as its all-time leader in wins.

“Those are all things that really nobody outside our program ever thought were possible,” Butcher said.

What wasn’t absurd was the emphasis that Butcher placed on his student-athletes being well-rounded young men.

Three years ago, the Chargers beat the program record for team grade point average and then did it again and again.

“We have five core values,” Butcher explained. “Unselfishness, accountability, humility, respect, and servanthood; those five core values are what shaped our program. They will be the same core values we stress next week when we sit down with the (NOC) team.”

Maybe the Lord above did indeed steer Butcher and his wife (Alison) and 10-year-old daughter (Kalli) to the Jets, but it remains questionable as to how much role religion played in sealing the deal with Kalli.

The cute youngster has a thing for slushies at Sonic Drive-Ins and as luck (or God) would have it Enid has three of them.

“Her favorite restaurant is a Sonic Drive-in,” Butcher said. “So she could not be happier and she informed me that I can feel free to bring her a slushie every day at school during lunch.”

A daily “slushie run” might sound crazy, but you don’t want to put anything past the Butchers. Like success on a basketball court, they embrace any form or degree of irrationality.