Indiana basketball look-back: Crean era continued to give ‘one and done’ new meaning with 2012 class 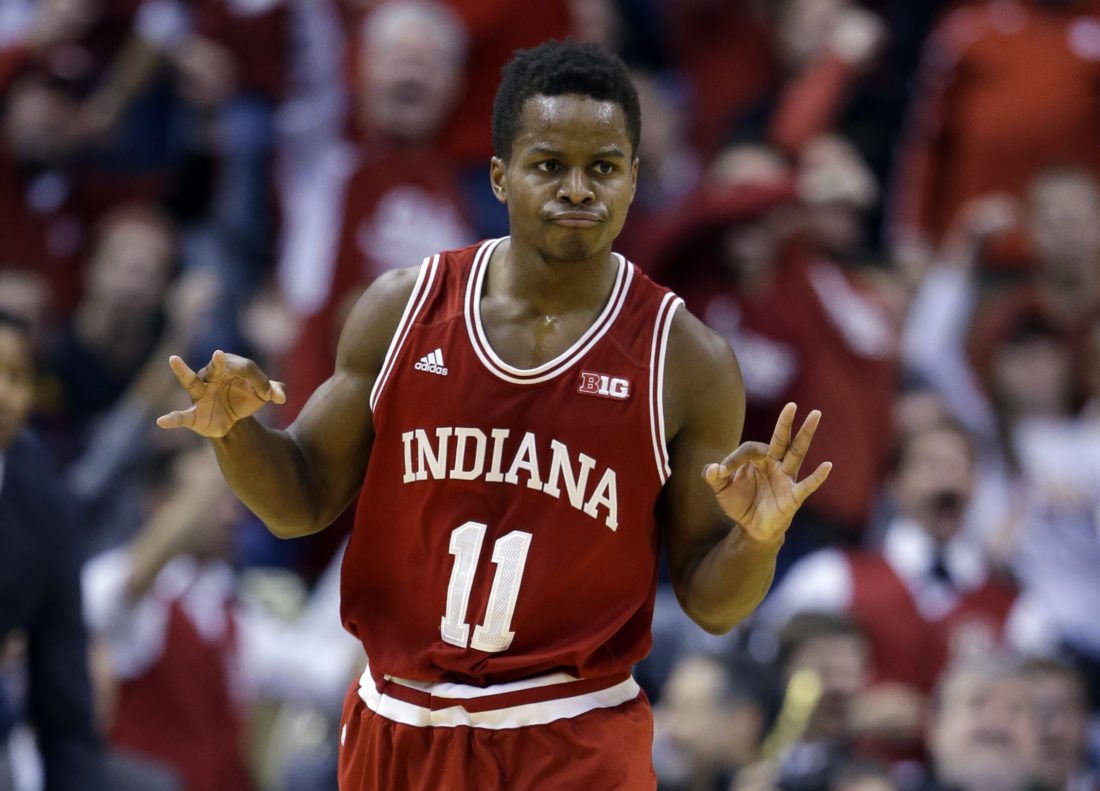 Indiana guard Yogi Ferrell (11) reacts after hitting a three-point basket against the Butler in the second half of a game in Indianapolis during the 2014-15 season. (By The Associated Press)

The 2012 Indiana University men’s basketball recruiting class was similar to the one that preceded it, in that former Hoosier coach Tom Crean hit a home run by landing one significant player but struck out everywhere else.

Of the three recruits that signed in 2011, none finished his eligibility with the Hoosiers and a year later only one of five signees did.

However, the one that did, point guard “Yogi” Ferrell, was a spectacular one.

“Yogi is leaving here as one of the great winners, and it’s really no way anybody’s going to be able to take that away from him,” Crean said following Indiana’s loss to North Carolina in the Sweet 16 round of the 2016 NCAA Tournament. “He’s won two outright championships in four years and he leaves obviously with the accolades, was a part of our two Sweet 16s in the last five years. What these guys have done is remarkable and it’s been an absolute honor to coach them. And I can’t put it into words any more than that.”

With New Albany High School senior star Romeo Langford announcing his college decision on April 30 and Indiana being one of three finalists for the athlete, News-Sentinel.com college basketball reporter Tom Davis is taking a daily glance back at the previous 10 Hoosier recruiting classes.

The Indianapolis native contributed – to a degree – over his first two seasons in Bloomington.

The 6-foot-8 forward played in 62 games and started 15 of those as a sophomore.

He averaged 18 minutes and five points per game as a sophomore.

He transferred to Georgia State for his final two seasons to play for former IUPUI coach Ron Hunter and Hollowell was very productive for the Panthers.

He averaged 15 points and five rebounds per game and started all 63 games for Georgia State in his time there.

The 6-foot guard was nothing short of spectacular for the Hoosier program.

The Park Tudor High School star was one of the most heralded point guards in the country as a senior in high school (he was a McDonald’s All-American) and he showed throughout his collegiate career as to why.

Ferrell started every one of the 137 games in which he played at Indiana and graduated as the Hoosiers’ all-time assist leader and sixth overall scorer.

He averaged nearly eight points and over four assists per game as a freshman and increased those numbers to over 17 and nearly four as a sophomore.

Ferrell averaged 17 points and five assists per game over his final two seasons and was a First Team All-Big Ten selection as a senior and Second Team All-American.

He shot just a touch under 40 percent from 3-point range for his career and finished with 633 assists and 312 turnovers.

Ferrell went undrafted in the 2016 NBA Draft but has found his niche with the Dallas Mavericks and just competed in his second season.

If anyone is curious as to why Tom Crean failed at @IndianaMBB, in 10 recruiting classes he signed 48 players and 28 of them (58.8%) did NOT complete their eligibility with the program. pic.twitter.com/RawwGcBAYz

The 6-foot-8 forward out of Columbia played his high school basketball in northern Indiana at La Lumiere School and took awhile to adjust with the Hoosiers.

In his first two seasons, Perea played in 49 games, but never averaged more than eight minutes and three points per game.

He developed as a junior and started 22 of the 26 games in which he played and increased his scoring to over six points per game and nearly five rebounds.

Following that season, he transferred to East Tennessee State and averaged eight points and nearly five rebounds as he started all 35 games as a senior.

The Broad Ripple High School standout signed with Indiana but never made to Bloomington, as he eventually began his career with Syracuse before finishing at IUPUI.

He played in 39 games over two seasons with the Orange and averaged less than three points per game.

With the Jaguars, he started 37 of 62 games and averaged around 10 points per game in two seasons.

The 6-foot-11 post out of North Carolina played in 10 games over two seasons with the Hoosiers before transferring to East Tennessee State for the better part of three seasons.

He started 29 of 33 games in his final season with ETSU.