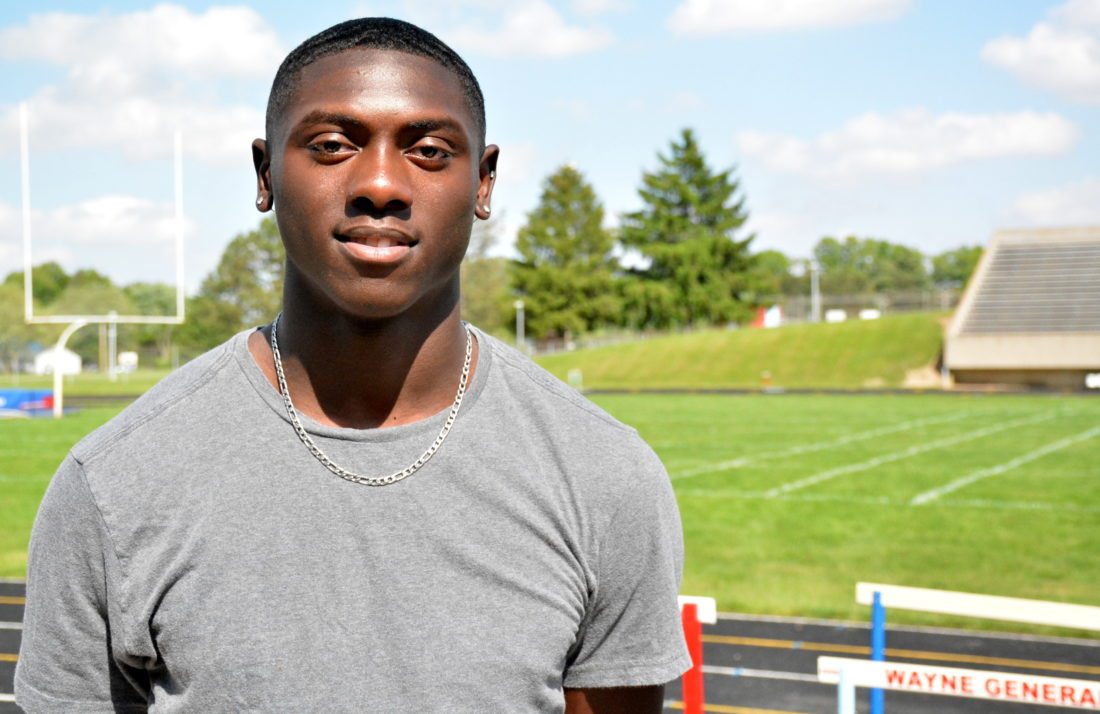 Craig Young wasn’t buying any of the stress and pressure I was trying to sell.

Young stood on the track at Wayne High School on Tuesday afternoon, talking with me about his recruitment, the daily contacts with big-time college football programs and the push to sway the biggest decision of his young life.

This has to be difficult terrain, doesn’t it?

Young shrugged a bit and flashed a natural, contagious smile.

“I wouldn’t say it’s difficult,” Young said. “I’m really soaking it all in, enjoying the process of being recruited because a lot of guys are not being recruited. I just try to soak it all in and live it day by day.”

Negatives? What negatives? That’s for the media, fans or recruiting “experts.” Young passes.

“I don’t look at the negative side,” Young said. “I stay away from that.”

Given his state championship contender speed in the sprints, he can always bolt if the pressure gets too much.

But Young, who is completing his junior year, seems sincere and grounded in embracing his football recruitment, which is coming from everywhere. He recently tweeted out his top five college choices in Indiana, Iowa, Michigan State, Ohio State and Purdue (I’m listing in alphabetical order, by the way). But he’s not ready to trim the list just yet.

“I’m going to take some official visits in the summer, narrowing it down to about two,” he said. “There are some other key schools that are not in my top five that I’m looking forward to visiting also. There are still some other possibilities.”

Wayne football coach Derrick Moore says Ohio State is recruiting Young as an “athlete” with a position to be determined later while the other schools are looking at him as a wide receiver.

Young, who is nearly 6-foot-5 and 210 pounds, is a special athlete, one of the best in Fort Wayne in recent years. He has the skills to play football or basketball or run track in college. In the age of specialization, he’s an example of a multi-sport standout.

Young caught 29 passes for 367 yards and four touchdowns, rushed for 255 yards and two touchdowns and intercepted three passes in football last fall. He averaged 17.4 points, 7.5 rebounds and 1.6 assists in basketball last winter. He won the sectional 100-meter (10.7 seconds) and 200-meter (22.43) sprints at sectional last week and helped the 400-meter relay to a win. He’ll be back in action at the regional Thursday at Indiana Wesleyan University.

Whatever season it is, that sport is Young’s favorite.

“I enjoy track right now, it’s a man vs. man sport, going out there and competing and trying my best,” Young said. “This is the best time of year, going against people from different regions and different schools. It’s pretty fun.”

Young sports the perfect attitude in his approach to his sports and to his recruiting. He’s thankful for the opportunities but he’s been able to avoid letting it become a burden.

“He’s a pretty humble kid with all that’s going on,” Moore said. “He’s a smart kid. He wants to do well for his parents, his family. He can take it as far as it could go as long as he remains focused and remembers what’s important: God, family and football third on that list.”

The demands of college football would seem prohibitive to playing other sports at that level, although some top football wide receivers have also excelled as sprinters over the years. It doesn’t happen regularly at Big Ten schools, but it could.

Top athletes often drop other sports their senior year of high school in order to focus on the sport they’ll play in college. Young said he has no intentions of focusing solely on football. College coaches are not discouraging him from playing basketball, he said. He has goals for all three of his sports for his senior year in 2018-19.

He also hasn’t ruled out trying to play more than one sport at the collegiate level.

“That’s still something I’m thinking about, playing multi-sports in college,” he said. “It’s really something I would probably do, but I’m focusing right now on what college to go to.”

While Young says he likes to participate in all three sports equally, he said his father, also named Craig, put him in football at age seven. His older brothers Javier Johnson, Sean Johnson and Anthony Linnear all excelled at football – the Johnsons at Wayne and Linnear at North Side – so the game runs in the family.

Young says he sees a lot of positives in his current top five college possibilities.

“IU always keeps in contact with me, texting me every day,” Young said. “Michigan State, their receivers coach comes by. Purdue, their offensive coordinator (JaMarcus Shephard) is from Fort Wayne and also coaches wide receivers and he understands where I come from. Ohio State, I’ve visited there two or three times, it’s fun there. Iowa, I’ve got a good connection with the recruiting coach. All the schools have their positives.”

Young has his head on straight and the college world at his fingertips. His future is bright, and he appreciates it. Pressure? What pressure? This young man has great vision, in every way.