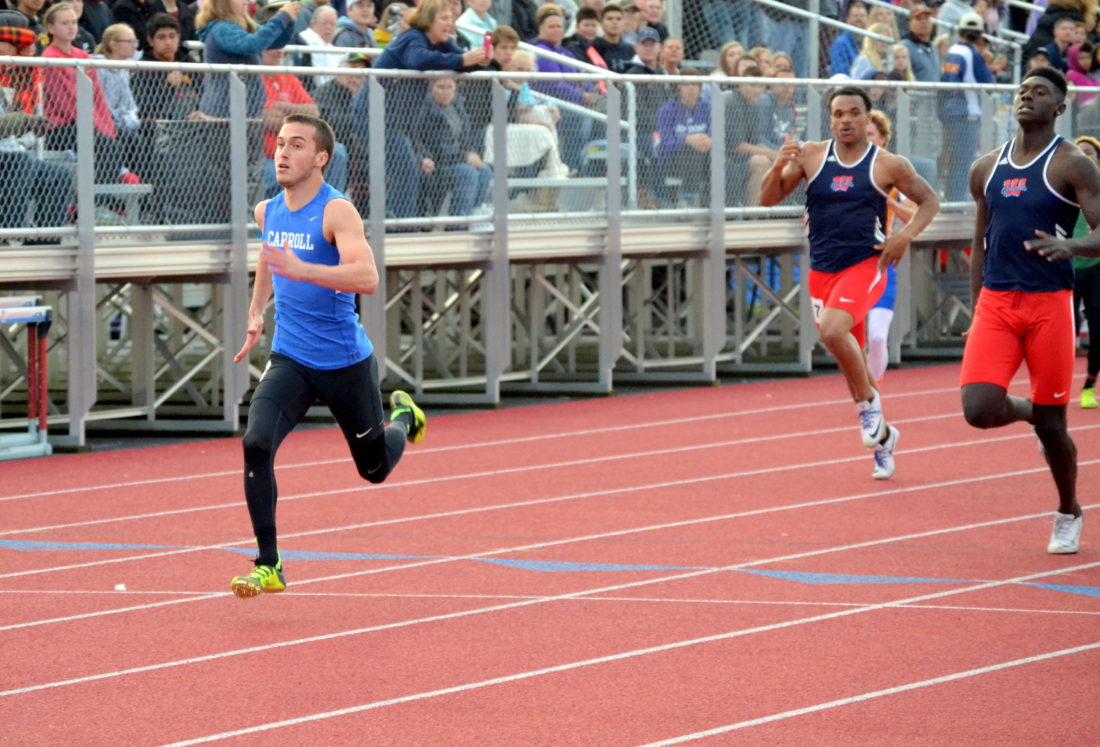 He had run the anchor leg on the Carroll High School state championship 400-meter relay squad, which was fantastic, but a knee injury that had lingered from prior to the state meet kept him from performing his best in the 200-meter race, which he had set his mind to doing.

“I knew going into my junior year,” Becker told News-Sentinel.com Thursday, “that 200 was going to be my race. That injury happened and it was just disappointing because I knew that I could compete with anyone in the 200. So I brought that (desire) into this year.”

The focus and determination that Becker possessed were enough to help him make up for any lost opportunity in the past, as the Charger senior tore past the rest of the field at this year’s state meet and won his first individual title.

That championship capped a stellar four-year career and made Becker an easy selection as the 2018 News-Sentinel.com Boy’s Track Athlete of the Year.

This year’s meet was the fourth consecutive season that Becker had advanced to the IHSAA Finals and the 200 meters was his 11th event in which he had qualified for that meet. After finishing fifth in the 100 meters as a junior and ninth in the 200, Becker elevated his training over the past year in order to perform at his peak when he absolutely had to.

“The philosophy this year for our team was if you are not going 100 percent then you are not getting faster,” Becker explained. “So we would sprint every single day as fast as we could and have full recovery between reps (and) that is what made me stronger as a sprinter.”

Becker was in top condition for this year’s state meet and it showed.

Having qualified for the 100 and 200-meter races, as well as serving as the anchor for the 400-meter relay squad, he would have to run five races in a single day, three of which were at maximum level.

“Running five events is a lot,” Becker said. “But in practice, you train for it.”

Becker explained that his training paid dividends and he felt stronger – and smarter – than he did a year ago.

“What made this year more successful than last year was that I have gotten older, I’ve gotten stronger, and I know how to run the 200 better,” Becker said. “It’s mostly a full-out sprint but there is a strategy to it.”

He had qualified sixth in the prelims with a time of 21.77 but he roared out of the blocks in the finals and held off all challengers with a scorching 21.50.

“It was just a mindset to win,” Becker said. “That is what it came down to this season; I’m not going to lose in the 200 this year.”

That belief nearly carried him to another state title in the 100-meter race.

After qualifying for third in the prelims with a time of 10.96, Becker notched a 10.52 to finish second in the finals of that race.

He will take his speed to Purdue University for the next four seasons and he plans on majoring in business, while also taking care of business.

Boilermaker junior Waseem Williams is the reigning Big Ten champion in the 100 meters, so Becker is anxious to begin training alongside him.