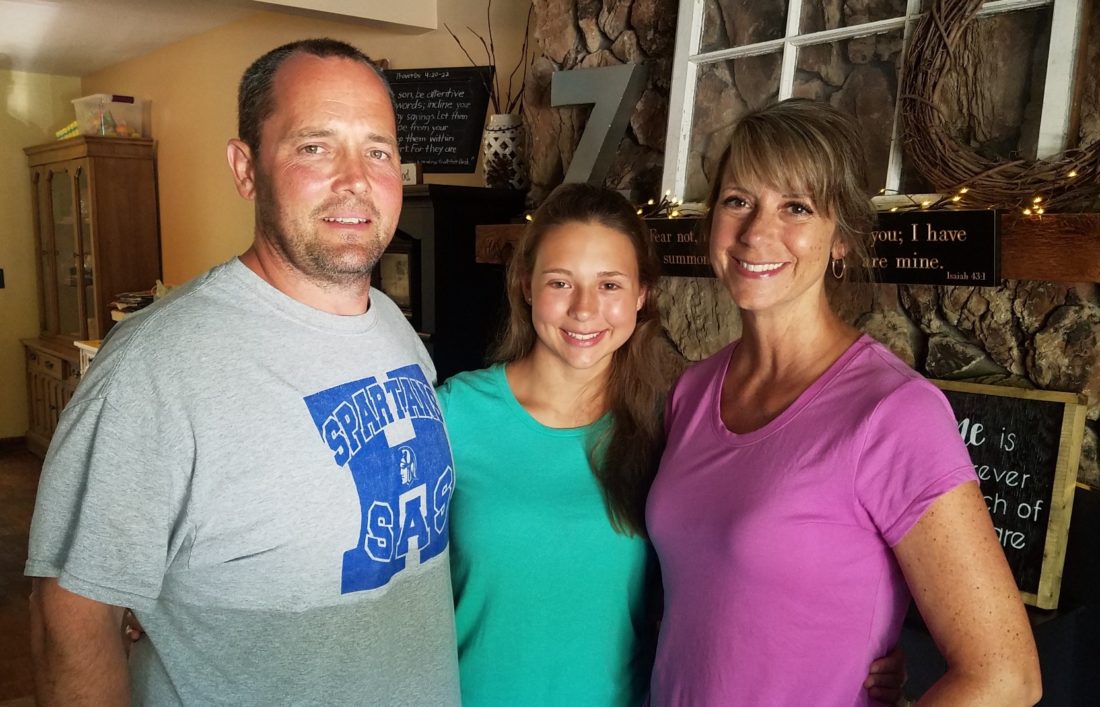 Molly Zolman, center, poses with parents Chad and Christine on Monday at their home. (Photo by Reggie Hayes of news-sentinel.com)

The donations poured in immediately, spurred by friendship and love from the football community and beyond.

Molly Zolman has dealt with epileptic seizures since she was 5 years old. Her parents Chad and Christine have pursued various treatments, including brain surgery in 2009. They’ve seen improvement over the years, but Molly still has one to three seizures per week. A seizure alert dog can be of help, both to protect Molly during a seizure and possibly alert her when a seizure is on the way.

The cost of the seizure alert dog, including extensive training, is $16,000, and is not covered by medical insurance. The Zolmans hoped the campaign could at least raise the initial downpayment of $3,000.

Eleven days after Harkness created the GoFundMe account, the goal of $16,000 was achieved.

“We’re so overwhelmed, it’s hard to express the gratitude we feel,” Christine Zolman said. “We prayed about this for the longest time. You look for signs. Is this the right thing for us? Good grief.”

“It was affirming,” Chad said.

“Affirming – that was the word,” Christine said.

Harkness wasn’t surprised. Zolman has been a teacher and coach in Fort Wayne for many years, the last 15 as the head coach at Homestead. Short version: He’s one of the good guys. He’s a highly successful coach, and a grounded one, focused on the big picture of mentoring young men in his program. He and Christine have five children (Emma, 21; Lily, 19; Molly, 16; Zac, 14; and Josie, 8) and a strong faith in God.

“I thought it was going to be a good response because he’s coached at (Bishop) Dwenger and that’s a huge community and of course he has the Homestead crowd,” Harkness said. “And it’s amazing today with social media. You share the page on Facebook and Twitter and people start donating.”

Christine said she would get so emotional seeing the donations rapidly increase, she had to resist looking at the GoFundMe page too often. “We just said ‘Wow’ a lot,” she said.

Molly Zolman wasn’t sure at first whether she wanted to move forward on acquiring a seizure alert dog. A soft-spoken young woman, she was concerned about the extra attention a dog would bring at school.

“I didn’t want everybody to notice me,” she said.

But she has aspirations of becoming a preschool teacher one day and the use of a service dog could allow her more freedom. “I do want more independence,” she said.

Molly’s parents have encouraged the next steps of independence, but they also harbor concerns for her safety. The onset of a seizure can’t be predicted, and there are injury risks when the seizures occur.

“It’s a fine line,” Chad said. “She wants to be more independent than we allow her to be. There are just certain situations where it’s risky to leave her alone. The pool, that’s obvious, but even taking a shower and things like that you have to be conscious of.”

The Zolmans began exploring the idea of a service or alert dog about two years ago but weren’t sure whether it was the right route. Christine said she wanted to make sure the dog was something Molly felt would be good for her, not just as another avenue for peace of mind for her parents.

“I wasn’t excited for it at first, but now that I’ve really thought about it, I’m going with it,” Molly said.

The Zolmans looked at various training organizations and settled on one from Medical Mutts in Indianapolis. The process to acquire the dog, once the application is submitted, is anywhere from 12 to 18 months. That includes finding and training the dog. Eventually, when the time gets closer, Molly will spend a week on site with her dog in training before the dog comes home.

Molly will have to learn 30 to 40 commands for the dog, and pass a handlers’ test to make sure they are compatible, Christine said. The dogs can be any breed and are often shelter dogs.

Molly has always had a natural affinity for animals, her parents said.

“I have no doubt she’ll have a great relationship with this dog,” Christine said.

As Christine Zolman points out, epilepsy is a stubborn condition. Strides continue to be made, but seizures cannot yet be eliminated entirely for many patients.

The Zolmans have tried a variety of medications and neurological care both in Fort Wayne and through Riley Children’s Health. They eventually took her to the Cleveland Clinic, where she underwent strenuous testing and brain surgery in 2009. The surgery went well and Molly was seizure-free for a year.

The seizures returned and the family continued to explore options, including a surgically implanted vagus nerve stimulator.

“The good news is this field seems to be growing and there are always new medicines and new treatments,” Chad said. “It’s going to be different always for Molly. She has to be aware of how to protect herself, too, and that’s part of learning to be independent.”

If Molly knew when a seizure was on its way, she could move to a safe place, such as a bed, to better protect herself from the risk of injury.

“Here and there it’s in the news and people will approach us and say, ‘Have you thought about this for Molly?’ ” Christine said. “Just like with anything, CBD oil or anything that affects epileptics, people are so willing to say, ‘Can this help you? Have you guys looked into this?’ ”

Molly Zolman and her parents are excited about the possibilities that could come with the seizure alert dog, which she would likely have by her senior year in high school.

“It would be great if, after high school, when she goes on to her next step, having one on campus wherever that might be,” Christine said. “That would be great.”

Harkness volunteered to help the Zolmans because of his friendship and the fact he previously organized a GoFundMe account for his son’s best friend who had cancer.

“I’ve been coaching with Chad for almost 20 years now,” Harkness said. “You see a lot of familiar names (on the donation list), familiar families and players who graduated 15 years ago. I actually had one prominent man who called me and asked how much we needed – at the time we were at $8,500 – and said he’d talk to me later to fill in the gaps.”

There were no gaps to fill. The community responded.