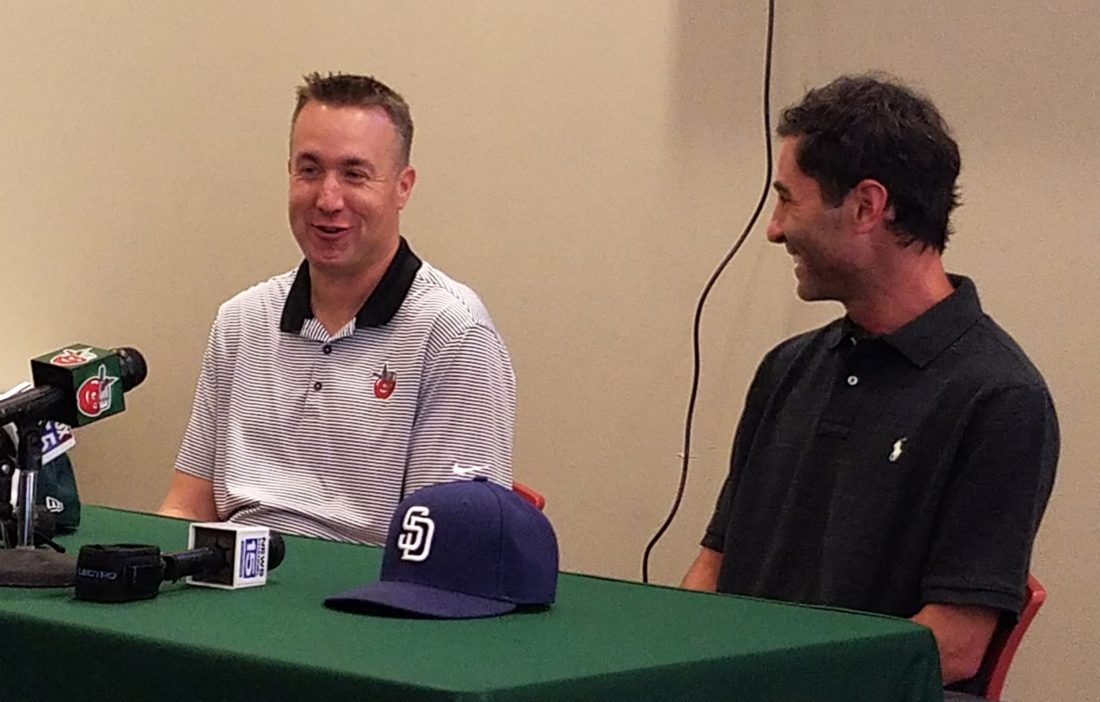 The only place where the Fort Wayne TinCaps and the San Diego Padres don’t mesh is on a map.

On a map, the distance of more than 2,000 miles between the franchises makes for incongruent baseball buddies. The rest of the affiliation adds up to one of the closest relationships in baseball, and one that will reach 22 years with the two-year extension deal announced Friday.

Why does it work?

1. The TinCaps, under president Mike Nutter, are a fine-oiled machine, giving the low Class A baseball players a perfect first taste of full-season baseball. Every Major League franchise wants that in its farm system.

2. The parent Padres realize what they have in the TinCaps, and they value how important the first step in a prospect’s career can be.

“To me, maybe the two most crucial levels are rookie ball and A ball,” Padres executive vice president and general manager A.J. Preller said Friday at Parkview Field. “Once you get in a system, it’s hard to reprogram or redirect when you develop habits and patterns. That’s why you have to have the right people at this level that put the time and effort into it, and those guys do a great job for us.”

A great example of the importance Preller and the Padres place on the TinCaps is seen in the parent franchise’s decision to bring Anthony Contreras back for a third season as manager and pitching coach Burt Hooton back for his sixth season.

Class A baseball can be synonymous with personnel turnover. Fort Wayne shines as different. Nutter talks about continuity in the relationship between the TinCaps and Padres. That’s grounded in part with his leadership and team in Fort Wayne. Much of the TinCaps operational staff has been part of the team for all 10 seasons at Parkview Field. It’s clear people who work for the TinCaps need a very enticing offer before they leave.

That type of continuity rarely extends to the clubhouse. Class A is considered a stepping stone, and it will be for Contreras. But he’s also a patient man, and he has a special knack for dealing with a young team where many of the players are barely out of high school.

Contreras knows his time will come to move up, just as it does with the players.

“AC creates a program, that’s what we talk about a lot,” Preller said. “It’s definitely a program out on the field as an organization. He knows on the field what guys need to do to get better. He’s very organized that way.

“He has a great relationship with Mike and the group here, and that’s a definite asset for us,” Preller said. “For the development of a lot of these kids, when they get to San Diego, they’re going to look back on their first full-season manager and say he had a lot to do with what they needed to do and how they became big leaguers.”

Hooton is another example of the Padres’ attention to detail with their low Class A franchise. He played for the Chicago Cubs and Los Angeles Dodgers and hit all the marks for a player on the field, from a no-hitter to World Series excellence.

Hooton, 68, could call it a day and no one would blame him. He could also lobby for a position further up the Padres’ chain. But he likes Fort Wayne and the Padres love how he connects with the young pitchers it sends his way.

“I feel good about somebody with his ton of experience who wants to give back to these guys at the starting point of their careers,” Preller said. “Personality-wise, he has a calming influence. He’s been there and seen everything. He has tremendous knowledge and he’s been able to hand that off to a lot of talented pitchers the last few years.”

The TinCaps were mentioned as a possible affiliate for the Chicago Cubs when the Cubs were looking for a Class A team a few years ago. Given the substantial number of Cubs fans in Fort Wayne, that would have been a major change of allegiance. Chicago settled on South Bend.

Some fans have suggested it would be better if the TinCaps were affiliated with a regional team such as the Cubs, Chicago White Sox, Cincinnati Reds or Detroit Tigers.

But would that be a better product than being connected to the Padres, who were singled out by MLB.com as having the top farm system in the majors?

I’d say no. Attendance is so strong with the TinCaps, a regional parent club would increase it minimally at best.

The Padres are willing to put their best prospects here, as they’ve shown with Fernando Tatis Jr. last season and MacKenzie Gore this season. They’ve given Fort Wayne enough talent and direction to reach the playoffs eight of nine seasons with three trips to the Midwest League championship series and one title.

Tatis seems destined to be a Major League All-Star one day. We’ll remember seeing him hit some bombs while he was here. There are already eight former TinCaps who have made their Major League debuts this season. Players who have stayed in the Padres’ organization such as Travis Jankowski or Franchy Cordero keep that connection to Fort Wayne alive.

“I couldn’t think of a better facility, a better place, a better fan base or a better staff to put the fate of our young players in,” Preller said. “It’s as good a situation as there is in minor league baseball.”

The TinCaps and Padres have a good thing going. Their homes might be 2,000 miles apart, but their relationship is as close as it gets.