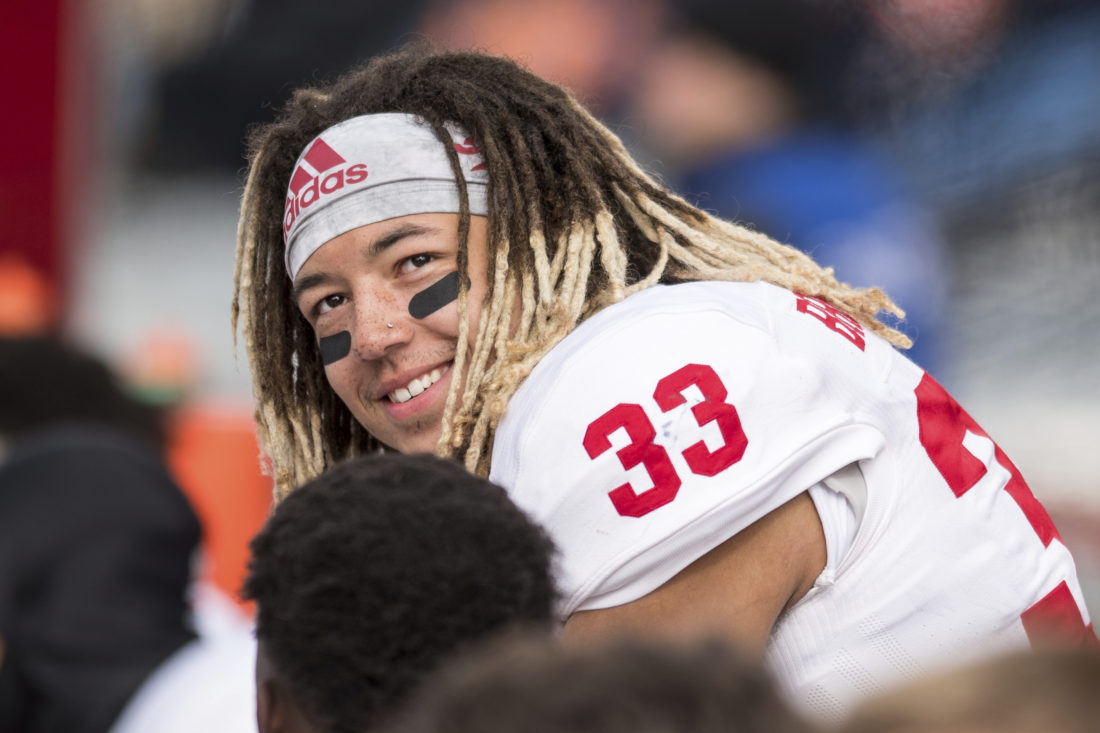 Indiana running back Ricky Brookins (33) sits on the sideline against Illinois last Nov. 11 at Memorial Stadium in Champaign, Ill. (Photo by the Associated Press)

Indiana University running back Ricky Brookins knew he’d tapped into something bigger than football when even some Purdue people showed their support.

Brookins started a GoFundMe account in late April to support IU football manager Matt Stauder, who is battling cancer. Then he and his running backs teammates started spreading the word.

“It’s amazing,” Brookins said Tuesday. “The coaching staff and running backs and players were retweeting it and supporting it. It shot up there fast. People from Purdue even retweeted it. It’s bigger than a rivalry.”

Stauder is undergoing chemotherapy treatment for Hodgkin’s lymphoma, setting a personal goal to be on the field this fall, Brookins said.

The GoFundMe page for Stauder was meant as a means of financial support and an emotional lift. Stauder had lost his father to a heart attack last season before his cancer diagnosis.

“Matt’s doing great,” Brookins said. “One thing about him is how positive he is all the time. The other day I was talking to him and he said, ‘Quit worrying about me. I’m just trying to get back out there with you guys.’ ”

Brookins’ lead on helping Stauder says much about the culture of IU football under second-year coach Tom Allen.

“You can talk about things to the team,” Allen told IUHoosiers.com last month. “You can put slogans on the wall, and we do, but when you see guys living it out, that’s different. Life is about doing.”

Brookins and Stauder have grown closer during Stauder’s illness but his decision to start the fundraiser came from a sense of all-for-one within the team. Maybe stepping up to help Stauder wasn’t a direct result of Allen’s influence, but there is a unique vibe around the Hoosiers program now, Brookins said.

Every program preaches team unity and togetherness. Allen has incorporated an acronym LEO (Love Each Other). But actions always speak loudest.

“I’m not sure how obvious it is to the outside, but being in this program …the main thing about Coach Allen is family and brotherhood,” Brookins said. “We’ll get in scuffles and things in practice because everybody wants to be better. But no one’s holding grudges after the fact, no one takes things personally.”

The atmosphere, Brookins said, is a team that has become more and more tight-knit during this offseason. And, as a result, they’re turning into a better football team, he said.

“I think we’re going to shock a lot of people,” Brookins said.

Take the strength and conditioning program as an example. The coaches have worked on a program to increase speed, as measured by how many miles per hour a player can run. Every player seems to be gaining speed, Brookins said.

Brookins, a fifth-year senior, will graduate in December with a degree in community health. He led the Hoosiers running backs with 19 receptions last season for 124 yards. He also rushed 11 times for 88 yards. So he’s more of a role player than a star, but the climate Allen has tried to promote makes every player a crucial one to the program’s success.

“I would have to say the team buy-in,” Brookins said in response to a question about the biggest changes in a year’s time. “We have coach Allen, and he’s excited, and everybody wants to be in. Now we’ve gotten the new coaches, schemes and things we haven’t done before. Everybody wants to win and has bought in. We’re working hard and the results are showing and people are going to see that.”

Sometimes in sports, seeing the bigger picture in life can lead to players drawing closer and pushing each other to new heights.

Brookins and his fellow running backs Connor Thomas and Morgan Ellison saw the bigger picture in trying to help Stauder. All stepped up to promote the GoFundMe account.

The idea of sports teams as families can be an overstated cliché. In this case, it’s right on the money.