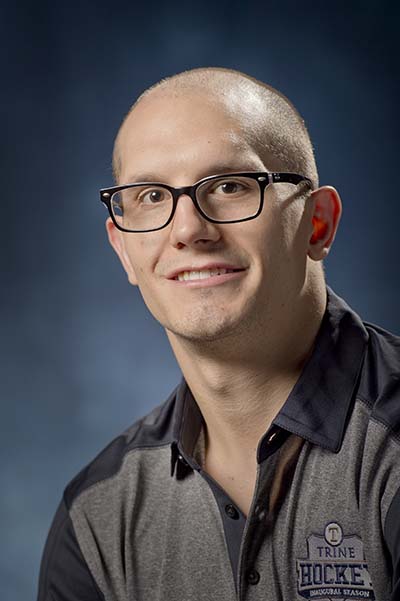 After three years as the director of athletic development at the Parkview IceHouse, former Komet Kaleigh Schrock is moving to Trine University where he’ll be the school’s new youth program director and assistant ice arena manager. He’ll also have opportunities to work with the Trine hockey teams.

Schrock, 33, retired from the Komets in 2015 to move to the IceHouse where one of his biggest accomplishments was helping organize the Fort Wayne Amateur Hockey Association in 2017. Aug. 6 is his last day in Fort Wayne, but Schrock will continue as the coaching and player development director for FWAHA, which means he helps develop practice plans for skill and coaching development. He will also continue to coach the Summit City Panthers club hockey team which won the Class 1A state title last winter.

“I was at a conference for USA Hockey when I heard there was an opening, and I just wanted to go up and check it out,” Schrock said. “I was blown away. It just felt like a fun place to be, a place where I could grow in my career. I felt comfortable within 10 minutes of being there.”

During his tenure at the IceHouse, which started during the end of his playing career, Schrock has worked to build up the numbers among the beginning skaters, helping create a system that allowed teams extra practice time so players could develop quicker.

“My heart is obviously tied to Fort Wayne, but to have the opportunity to start something from the ground up and make it the culture that it should be for the kids…” Schrock said. “That’s an exciting opportunity.

“Fort Wayne hockey is in a better spot now than when I started, and I want to go and do that somewhere else. I won’t be on the ice as much in Fort Wayne, but I’ll still be a part of it. For the northeast Indiana region, I think this is a great opportunity because I would love it if down the road we could all work together to make hockey bigger than what it is right now.”

For that to happen, he’ll have to build up the numbers of younger skaters at Trine, and the IceHouse will have to hire a replacement who understands and can continue the program’s momentum. Schrock stressed the practices and the drills, but he also made sure the kids were having fun at the same time.

“I’ll have to focus on their learn-to-skate program and give kids in the hockey program the best experience we can give them,” he said. “If they aren’t playing games and having fun, it’s hard to keep them. The instruction is important, but the kids have to have a passion for it, and you have to find a way to create that passion.”