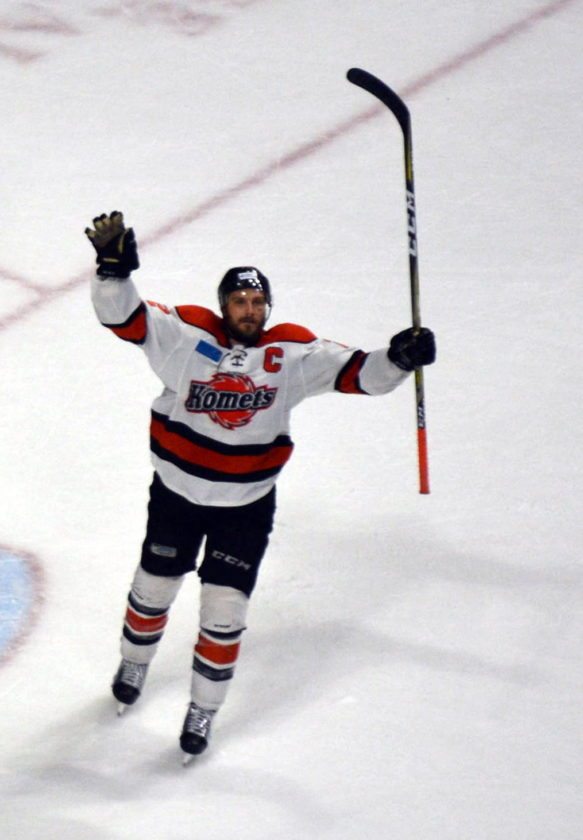 From a Komets press release:

The Komets announced Thursday that three players have inked agreements to return to the Fort Wayne roster for 2018-19. Forward and team captain Jamie Schaafsma and defensemen Jason Binkley and Ryan Lowney have each agreed to terms.

That gives the Komets four returning players from last season, including rookie forward Anthony Petrozzelli who signed earlier. The Komets have until noon Saturday to submit their eight-man ECHL qualifying offer list, but these players will not count against that list because they have already signed for next season.

Schaafsma, 35, will be entering his 15th career year and fourth with Fort Wayne. The skater has been the Komets captain in each of the past three seasons and will serve his third year as player/assistant coach. Schaafsma started his pro career skating five seasons in Europe. His first pro season in America was with the Flint Generals during 2009-10 scoring career highs of 30 goals and 35 assists for 65 points in 75 IHL games before returning to Europe for two seasons in Italy. The Chatham, Ontario native then returned to the States in 2013 and collected three straight league championships with the Allen Americans, two CHL and one ECHL, before first joining the Komets in 2015-16. Last year Schaafsma scored 12 goals and 27 points in 48 regular season games and added five goals and seven points in 18 playoff games.

“Having our captain back was a priority for us this summer,” Komet general manager David Franke said. “Jamie Schaafsma’s leadership on and off the ice is very important to our overall success. Jamie can play all three forward positions and defense if needed. He still has the fire to win and we are fortunate to have him, his wife Nicole and their four children returning to the Komet family.”

Binkley, 26, will be returning for a third year in Fort Wayne and his fourth as a pro. Last season the Powell, Ohio native matched his career high of seven goals and led Fort Wayne defensemen (t) for his second straight year with 27 assists and ranked third with 34 points. Binkley was honored with the Unsung Hero Award for the year before leading Komet defensemen in the playoffs with seven assists, 10 points and +5 in 18 post-season games.

Lowney, 24, will also be returning for his third season in Fort Wayne. The Redford, Michigan native first joined the Komets in March, 2017 and finished the year appearing in 14 games before adding eight playoff games. During 2017-18, Lowney logged his first full pro season scoring seven goals and 26 points and ranked fourth among league rookies with +22 in 60 games. The defenseman earned the Komets Most Improved Player Award before skating all 18 playoff games adding two goals and five points.

“Jason Binkley and Ryan Lowney are similar players. Both have good offensive ability as well as being sound defensively,” Franke said. “They move the puck well and complement our forwards. Both are key parts to building our defensive core.”