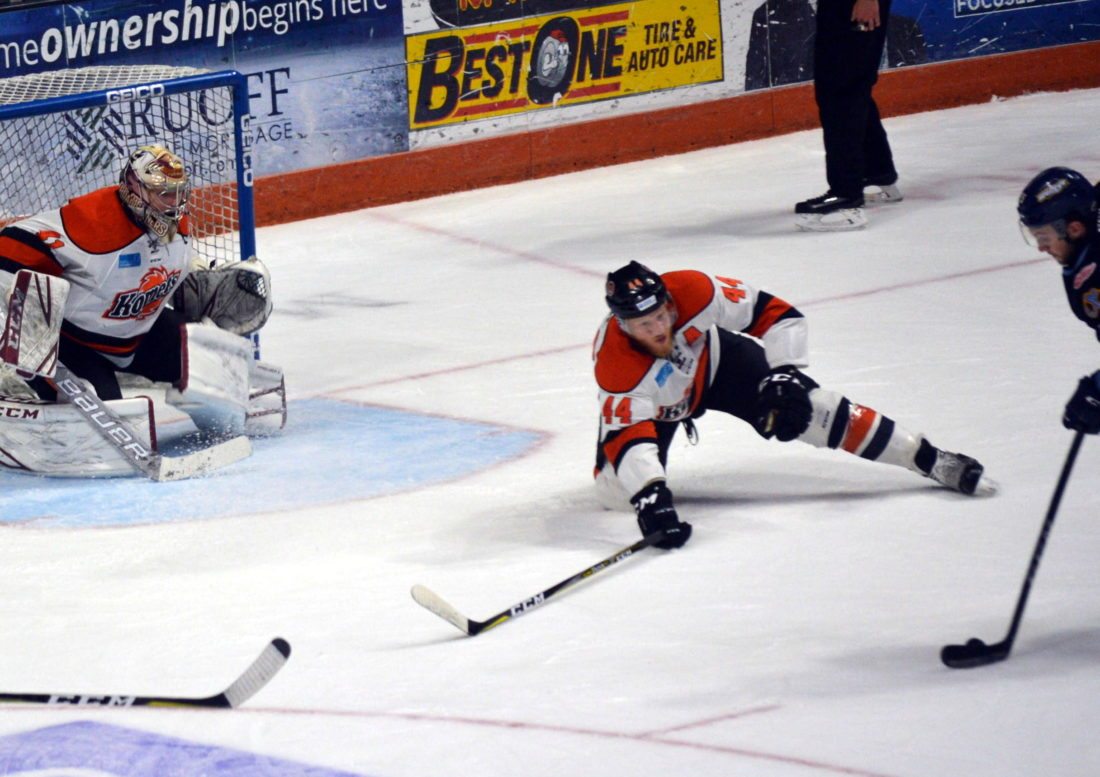 Komets defenseman Cody Sol goes down to try to block a Toledo shot. Luckily for Sol, the shot went wide. Sol is the only Komet who has played for Colorado. (By Blake Sebring of News-Sentinel.com)

Each team can qualify up to eight players off their season-ending rosters by midnight Saturday. That reserves the team’s rights to the players until July 16 at which time the team can sign the qualified player to any salary or may elect to take no further action. Teams that extend a valid qualifying offer to a non-veteran player shall retain the rights to that qualified player for one playing season.

The league is not expected to announce the qualifying offers until Monday.

The Komets currently have returning players forwards Anthony Petruzzelli and Jamie Schaafsma and defensemen Jason Binkley and Ryan Lowney signed to return, and defenseman Kevin Gibson as a new player.

“I think we’re off to a good start,” Franke said. “Defense shouldn’t be a hard thing for us to put together, but the forwards is where we lost all the firepower. That’s going to be the challenging thing, but there are always more forwards out there than solid defensemen.”

After he underwent season-ending hip surgery in February, Franke talked about how the Komets wanted to re-sign forward Taylor Crunk for next season. That’s still the plan.

“I’ve made an offer to his agent, and I’m waiting to hear back,” Franke said. “He’s definitely in our plans. It’s just getting everybody together and agreeing on something. He won’t be qualified but we still plan on trying to sign him.”

Sol could be next

Veteran defenseman Cody Sol could be the next player signing announced as well, though he also may not end up on the qualifying list.

“We’ll make sure to get him taken care of,” Franke said. “He’ll be signed back. I don’t think there’s any question about that. Even if we don’t qualify him, he’ll be back here.”

Sol put together a career-best season last year with eight goals and 29 points in 53 games. He also served as alternate captain and thrived in that role.

Shea may be retiring

“Right now, he’s probably not going to be playing and give this 100 percent of his time,” Franke said. “He wants to give this a big shot. I think if he has a summer where he has some success in the real estate business he’ll stay retired.”

Franke also announced that coach Gary Graham and assistant Ben Boudreau have signed two-year contract extensions, and he’ll be talking with volunteer assistant Olivier Legault next week… Franke said he’s been talking with Daniel Maggio, but the veteran wants to pursue an AHL deal at this time… Former Komet Gabriel Desjardins has been named the ECHL Western Conference winner of the Heart and Hustle Award as voted upon by the Professional Hockey Players Association. He’s signed to play in Sweden next season.