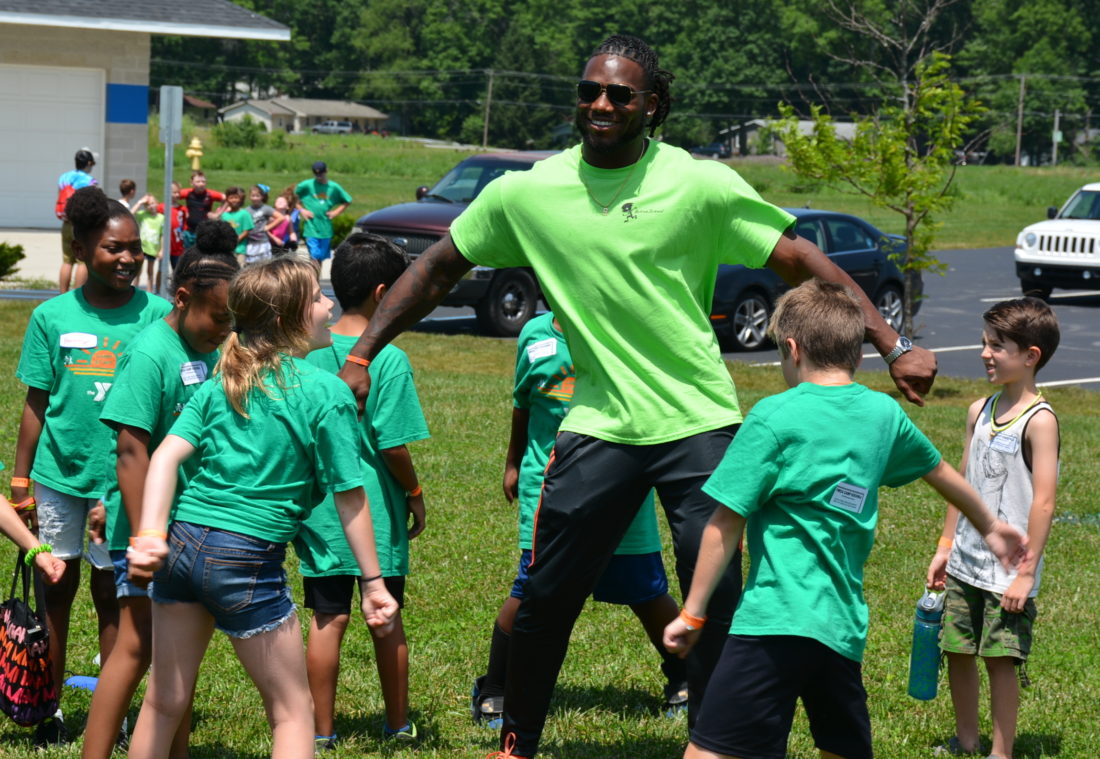 The one that stands out when he returns to his Fort Wayne home: Kid at heart.

“Time is one of our biggest assets, so take advantage of it,” Smith said in response to a reporter’s question about what he would tell his 10-year-old self. “Embrace being a kid, because you’ll never get it back.”

Of course, that’s only half-true. You never chronologically get to be a kid again. But you can bring out the childlike qualities that make you embrace every chance as an adult to impact the lives of children.

Smith stopped by his old Bishop Luers High School stomping grounds on Thursday and attended the Active Science celebration Friday at the Jackson R. Lehman Family YMCA and at Praise Park. Next week, he’ll join with his brother Rod, also a Cowboys player, for the second-annual Smith Brothers’ “Earn Your Stripes” camp at Saint Francis.

Seeing Fort Wayne children embracing an active lifestyle, which Smith tries to promote, brings a smile to his face.

“It’s very gratifying,” he said. “In my childhood, I went to the YMCA every single day. (It’s gratifying) to be able to provide some sort of guidance and fuel to the system we have in place in Indiana and Northeast Indiana. It’s a great feeling.”

Smith, who turned 23 in June, will enter his third season with the Cowboys. He was drafted out of the University of Notre Dame in 2016 and did not play that fall while recovering from a brutal knee and foot injury suffered in a bowl game his senior season.

He returned to the field last season and played linebacker in all 16 Cowboys games, starting six, finishing with 81 tackles (third on the team), a sack and two forced fumbles. He wore a brace on his foot last season, but should not have to wear it this season. He has mentioned to Cowboys reporters how he feels “more free” as he enters the 2018 season, implying he’ll be able to move much better.

Most Cowboys-centric media outlets project him to be a starter at strongside linebacker this fall.

“In life and football, when you become a pro, it’s all about progression, so each year I’ve improved,” Smith said. “Everything expected, that’s happening now, and now it’s just about continuing to put in the work.”

Smith is a potential trendsetter in terms of his involvement with the Active Science program. Lindsey Carbone and Lindsey Cook, both based with the program out of Massachusetts, came to town for the celebration. Carbone, graduate program director for Merrimack College School of Health Sciences, and Cook, Active Science school coordinator, were impressed by the size and success of the Greater YMCA of Fort Wayne program. More than 550 children attended the celebration.

The local Active Science program has the largest enrollment in the country, Carbone said.

It is also the only one to partner with a professional athlete. Parkview Sports Medicine is also involved in the program and had athletic trainers on hand Friday to help with the celebration of fitness events.

“Having Jaylon here motivates the kids to do even more,” Carbone said, “and that’s what we’re striving for.”

Smith’s demonstration of self-motivation is evident to those who have followed his career. He never seems to slow down or let an obstacle interfere with his positive personality.

Cook said the youngsters in the program in Lawrence, Mass., were excited about the connection when she told them of Smith’s involvement in the Fort Wayne program.

“They were super-excited to know a football player is involved in the same program they are,” Cook said.

Smith doesn’t have to donate his time to Fort Wayne. Yet he does so willingly, not out of obligation but out of a desire to make an impact.

“In life, a lot of times our years can be prolonged when we’re healthy,” Smith said.

Whether any of the kids running around Friday end up as professional athletes, they can always emulate Smith in a winning fashion: Build and maintain a healthy attitude, and remain a kid at heart.