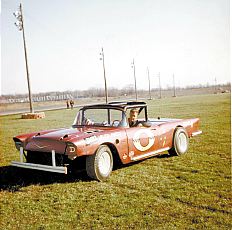 In the tightest voting in any category yet, Conan “Moose” Myers won the Fort Wayne’s Favorite auto racing poll with 27.1 percent of the vote to edge Gene Hartley with 23.1 percent.

The Fort Wayne native started his career in 1961 at age 20, sharing a car with Tom Wible that was purchased for $275. In 1964, Myers began driving for Jim Stovall and began to dominate the local racing scene. He won his first track championship at Baer Field in 1966.

Wherever there was a good race in the Midwest, Myers was there. He won three Tony Bettenhausen Classics at Illiana Speedway in Schererville, and also won races in six states.

In 1973, Myers started competing in the American Speed Association, winning the series points championship in 1975. He also raced 10 years in the Automobile Racing Club of America series, winning the points title in 1977. He’s the only driver to win both the ASA and ARCA series championships. He also raced for 10 years in USAC, and many famous stock car racers, such as Harry Gant, Neil Bonnett, Donny and Bobby Allison and Buddy Baker, often came to Fort Wayne to challenge him.