REGGIE HAYES: Five essentials for this to be the year for Indiana University football 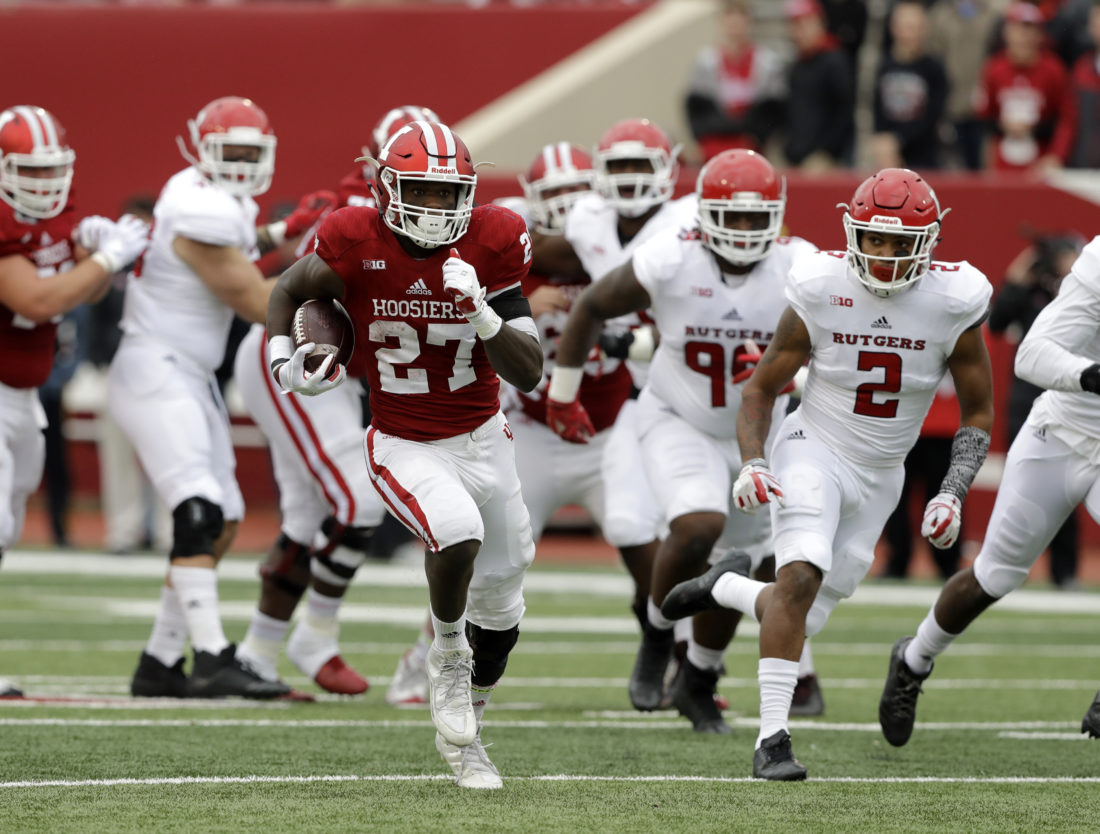 Indiana running back Morgan Ellison (27) runs during the first half of an NCAA college football game against Rutgers, Saturday, Nov. 18, 2017, in Bloomington, Ind. (AP Photo/Darron Cummings)

There are still two months until the Indiana University football team kicks off its 2018 season with a trip to Florida International. But the ebullience coach Tom Allen spreads everywhere he goes increases the anticipation.

Maybe this is another case of false hopes. Maybe this is the pre-reality period where IU football fans start thinking about 9-2 records and warm weather bowl games, only to receive a cold slap of mediocrity in the face.

Or maybe this is the year.

This is what’s great about college football in July. It’s all about what might happen and what could happen. It’s the best time of year to dream. Everyone’s undefeated.

Allen’s attitude, which has rubbed off on his players, makes it easy to be optimistic in July. And if all things fall into place, who’s to say it won’t be a season of transformation for the Hoosiers?

Here the five most intriguing areas where, if things go right, they could go very right for the Hoosiers:

The assumption is graduate transfer Brandon Dawkins from Arizona will be the favorite to seize the position and use his combination of passing/running skills with experience to make the offense more dynamic. However, it could turn into a competitive battle because Allen likes to push players with competition within the camp.

Peyton Ramsey ascended to the starter’s role last season (1,251 yards passing, 10 touchdowns) before an injury and he returns with both health and some seasoning from being thrown into the mix. Incoming freshman Michael Penix Jr. is a wildcard. Can he develop quickly enough to push for playing time?

Allen doesn’t seem to want to use a multi-quarterback system, but he also knows how difficult it is to keep a quarterback healthy all season. A lot depends on Dawkins and how quickly he thrives in the Hoosiers’ system. In his 23 career games at Arizona, Dawkins threw for 2,414 yards with 15 touchdowns and 12 interceptions and rushed for 1,582 with 20 rushing touchdowns.

A healthy Morgan Ellison would be a major positive. He rushed for 704 yards (4.9 per carry) and six touchdowns last season. Like most of the Hoosiers in the upgraded strength and conditioning program, he’s expected to have improved speed from a year ago.

Cole Gest rushed for 428 yards (4.6 yards per carry) last season and could provide depth along with versatile running back Ricky Brookins.

Perhaps the best part of this equation is the fact IU returns starters at every offensive line position and strengthened that with the addition of former Miami lineman Nick Linder, a graduate transfer.

Assuming Dawkins emerges as the starter and slings the ball (Allen points to his throwing as a major asset), the question becomes who will be open to catch it?

Two potential top targets, Nick Westbrook and Donavan Hale, missed spring practice with injuries. Both are expected to be fully healthy this fall, and both bring loads of potential. Two years ago, Westbrook hauled in 54 receptions for 995 yards and six touchdowns. He has the speed and hands to make big plays. Hale has seemingly only scratched the surface of what he could do. He caught 13 passes for 210 yards in 2016.

J-Shun Harris, back from his third ACL injury, hopes to be a factor, although his brightest skills seem to be in the return game. Also on the radar is the top returning target from last fall, Luke Timian (68 receptions, 589 yards), along with Whop Philyor (33 receptions, 335 yards). A healthy Westbrook and Hale make this group a potential asset for the Hoosiers.

The graduation of Tegray Scales and Chris Covington leaves a gaping hole for opposing running backs to attack unless some players step up and close it down.

The return of fifth-year senior Dameon Willis Jr. could provide the leadership and experience needed to help mold a relatively new unit. Michael McGinnis, another redshirt senior, returns and the improvement of junior Reakwon Jones and redshirt freshmen Thomas Allen (the coach’s son) and Mo Burnham will be counted on to help mitigate the significant losses of two playmakers.

“I’m ready to go play ball with those guys,” Willis said last month. “They are very excited and working hard at it, and I’m ready to see that finished product (in the fall).”

This is an intangible, to be sure, but it will be important to see how the mix goes. With the addition of three graduate transfers (Dawkins, Linder and defensive lineman Kayton Samuels), the older players must lead the way for the Hoosiers when they hit those inevitable moments of adversity, both unpredictable (injuries) and predictable (road trips to Columbus, Ohio, and Ann Arbor, Mich.).

There are some significant fifth-year seniors in Harris, Willis, offensive guard Wes Martin and former Bishop Dwenger tight end Ryan Watercutter, players who have devoted hours and hours to the program. They want to go out on a positive note, with the program in a better place than when they arrived. Eight or nine wins? A nice bowl bid? It’s all on the table, especially in July.