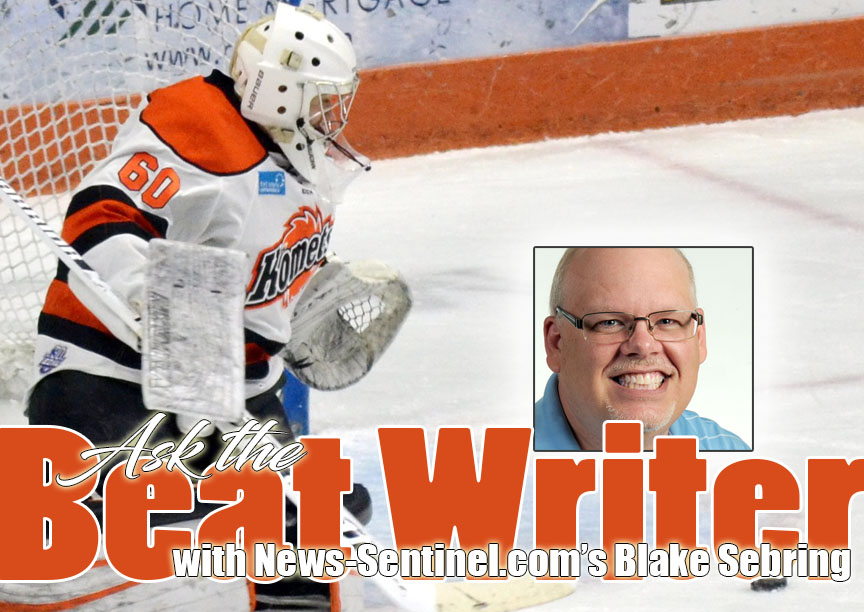 As the start of a regular new News-Sentinel.com feature, we’ll attempt to answer questions from the fans every two weeks or so. Fans can submit questions by replying to this story, through email at bsebring@news-sentinel.com, on Twitter @blakesebring or on Facebook.

Question: How many pounds of M&M’s does Icy get from fans on an average season?

News-Sentinel: The easy answer is: Never enough. He receives about five bags per home game, which is part of the reason the tubby bird can no longer fly.

Q: I would like to know how many people a season play Icy and are they all male?

NS: There have been three people to play Icy and all are male. It’s part of why Icy always talks about chasing chicks.

Q: Was there ever any discussion about changing the team name and logo? Several minor league hockey teams have changed their names and logos over the years. I for one am glad it’s never changed in Fort Wayne, I love the name Komets because it’s one of a kind and there’s a story behind the spelling. I love the Komets logo and the colors too. And lastly, is the Komets logo a saw blade or fireball? I’ve heard both descriptions used.

NS: There has never been any question of changing the name I have ever heard of. You’ve got to remember there was a continuity of ownership from the original owners to Ken Ullyot and Colin Lister through about 1985, and then Frankes took over in 1990 and they have never considered it. It’s a fireball, period. They always tinker with the logo to make it interesting for specialty jerseys, but the current owners are traditionalists when it comes to the name and the main logo.

Q: Will we possibly see any of last year’s players who belonged to the Roadrunners or will they automatically go to Norfolk?

NS: It’s possible because some of their contracts with Tuscon have expired and they are free agents. Komets General Manager David Franke said Tuesday that he’s going to reach out to talk with Michael Houser this week. Ryan Culkin signed an AHL deal with Laval on Sunday, Artie Tyanulin is expected to head back to Europe next season, and Trevor Cheek should get a solid chance with Tucson in the AHL after his second half last season.

Q: Whatever became of John Goodwin and Bobby Rivard?

NS: Jumbo lives in Lima, Ohio, and still receives visits from some of his former teammates, while Bobby is in his hometown of Peterborough, Ontario.

Q: Are they open to making the Komets an AHL team? Is there interest? Do we care?

NS: In the age-old debate, the Franke family is not interested because it doesn’t make financial sense. The recent trend has been for NHL teams to buy their AHL farm clubs, in part because they don’t make money. There are lots of financial reasons why it’s smart to stay in the ECHL, partly because there would also have to be a price hike for tickets because of many factors.

And yes, they would have to raise ticket prices significantly because of increased costs and revenue they receive from their lease so let’s please not start that debate again (and again and again).

Q: My friends and I just bought Bob Chase’s pool table that was in his basement. We have been playing on it and we were wondering how to find out any good stories about it. I’m hoping the old Turner Cup was on it.

NS: So far, after reaching out to Bob’s kids, I have not been able to find any stories about the Turner Cup and Bob’s former pool table. The kids are being pretty secretive regarding any other stories with the pool table. I’m guessing they are hiding some things!

Q: Why don’t the Komets have a fan club?

NS: The few times over the years it has been tried, the fan club has been more trouble than it has been worth so the team stays away from them. It’s sort of like trying to herd cats, and the liability factors far out-weight any potential benefits. It’s not worth the headaches. They also say officially that no group of fans is more important than the whole.

Q: Why do Komets and other ECHL teams keep switching up home sweater colors? In the NHL now, home teams wear dark. Why not follow the leader?

NS: The ECHL has a policy of switching at the midway point of the season so the home team wears white for one half and dark for the other. It used to be that the home team always wore white at home until the NHL switched that up in 2003. The ECHL also decides each playoff season which color home teams will wear during the postseason.

Q: Do the players in the ECHL get a cut of merchandise that has their likeness? Customized jerseys and player buttons come to mind.

NS: No, they do not because that would be a salary cap violation. It’s also not like major league sports where tremendous amounts of money are involved. What you do for one, you have to do for all.

Q: Can we ask questions about your career like how you got started and the love of the Komets?

NS: I was asked to take on the Komets coverage after Bud Gallmeier retired in 1990 after 35 years. I thought that was a crazy idea because who wants to follow a legend? I didn’t get much say in it, thankfully looking back. I had been a very casual fan before that as kid growing up in Fort Wayne, listening to Bob on the radio, mostly. I try to provide the same passion and dedication to every area of coverage I’m responsible for, not just the Komets.

Thanks for taking part in our first “Ask the beat writer” segment. Please continue to submit questions and we’ll be back soon. What would you like to learn about your favorite hockey team?