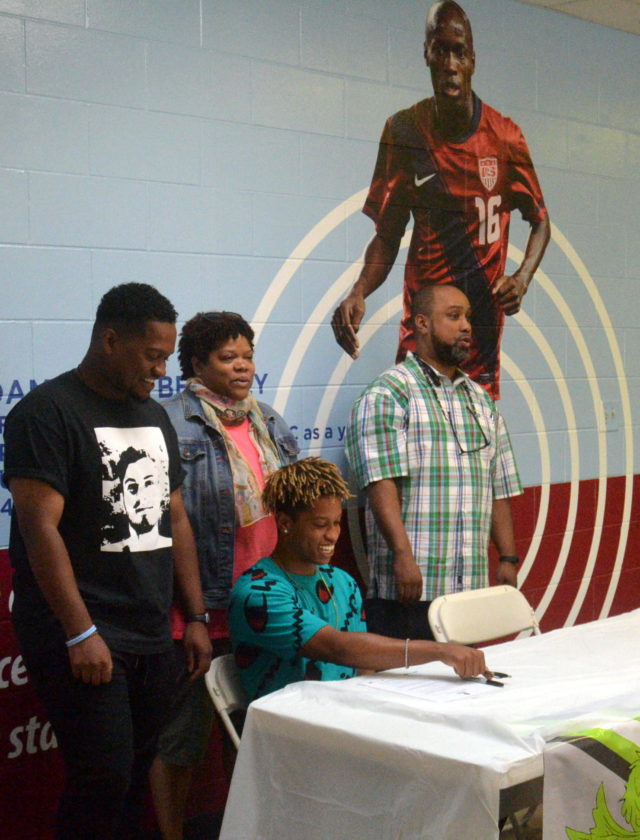 With family members and a poster of DaMarcus Beasley looking on, Akil Watts reaches for the pen he'll use to sign a professional contract with a club soccer team in Mallorca, Spain. (By Blake Sebring of News-Sentinel.com)

Since he was 4 years old, running along the sidelines while his older brother’s team practiced, Akil Watts has always tested himself against players who were older, playing in higher skill levels. This time he’s taking a huge leap of faith against the highest level of competition he’s ever faced.

The Fort Wayne product signed Monday to play soccer with Real Club Deportivo Mallorca in a second-tier Spanish professional league. Watts, 18, will leave for Europe to begin training as soon as the work VISA papers are completed.

“I went there in January and they just treated me so well,” Watts said. “I felt like I bonded with everyone really well. The soccer was extraordinary and I liked that soccer was their passion.”

He started his high school career with Canterbury, and three years ago was a member of the United States 17-and-younger national program. He’s been training with Major League Soccer’s Portland Timbers’ academy most recently before agreeing to Mallorca’s contract. His other option was to play in college, but this opportunity was too good.

“I’m going to have to adapt to it, obviously it’s not going to be easy, but it’s a risk I have to take,” Watts said. “I’m willing to take that risk to show Mallorca what I’m about and the world what I’m about.”

He’ll train with the club’s 19 & younger squad and start with the B team.

“I’ve known him since he was 4 or 5 years old and there was always something unique about him,” said Bobby Poursanidis of Fort Wayne United. “There was something different about him. I watched his growth and a lot of it has to do with training with his brother. He was always training 4 or 5 years up. It was really a treat for us to see and identify his talent.”

Poursanidis hosted the contract signing at The Plex during the middle of summer camp season, hoping Watts’ example might inspire some of the younger players in attendance the way that DaMarcus Beasley’s success inspired Watts.