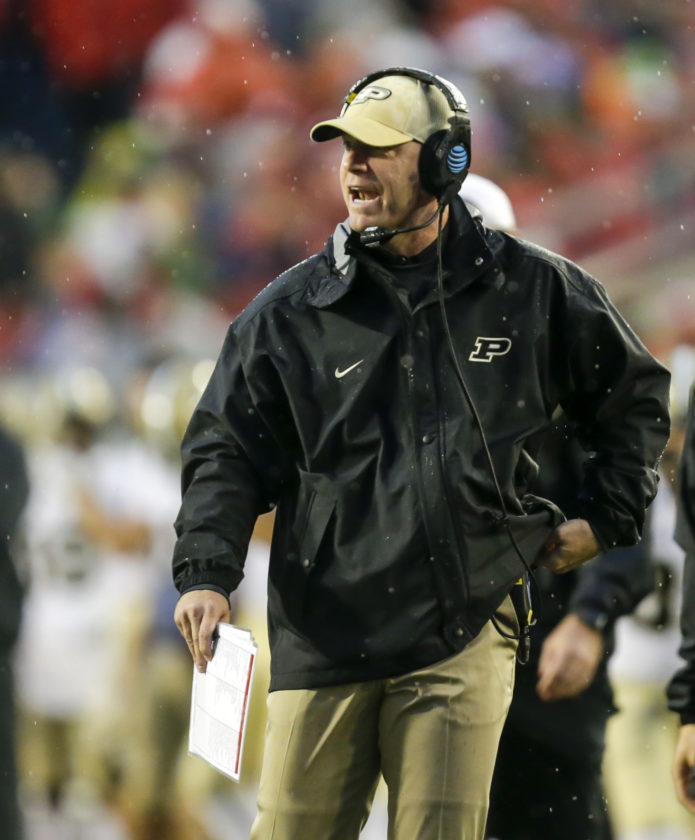 That way is taking a left turn.

Veering left when everyone else goes right is how Joe Tiller won with his “basketball on grass” approach. Tiller was helped for a while by having Drew Brees, but he continued to win with other quarterbacks, too.

I’m not saying Brohm is “Tiller, the Sequel.” But he might be. He takes left turns, and he does so quickly with no looking back.

Big Ten Media Day(s) takes place next week and Brohm will be accompanied by three players to meet the media: linebacker Markus Bailey and quarterbacks David Blough and Elijah Sindelar.

Now, Media Day ranks as a minor event in the grand scope of a college football season, but this fits perfectly with Brohm’s unorthodox style.

No one brings two quarterbacks to Media Day.

Brohm says he doesn’t know which quarterback is his starter, and doesn’t mind revealing that uncertainty. As a result, he’s willing to let Blough and Sindelar take on multiple questions about the job, who should get it, why they should get it, what they think of the other quarterback, on and on.

Purdue fans should love Brohm’s brashness, which they do.

“I actually think it’s the fair thing to do,” Brohm said this week on Dan Dakich’s radio show. “We have two guys who have proven they can play for us. Both have had their moments, their ups and downs, but both have helped us win in the end. They both are going to compete again for the job.”

Brohm, a former quarterback, went on to say he doesn’t promote a two-quarterback system.

But he left some wiggle room on that – an option to take that left turn.

“Maybe we’ll go into it playing two guys,” Brohm said. “Maybe one emerges. I do like how both guys finished, I think they got better and I think we can win with both.”

Blough and Sindelar both saw their seasons affected by injuries last season, with Sindelar playing through an ACL tear, which didn’t stop him from throwing for 396 yards and four touchdowns in the Foster Farms Bowl win over Arizona. Blough completed 65 percent of his passes a year after leading the Big Ten in passing yards per game.

“It brings out the best in each one,” Brohm said. “They know ‘I can’t have bad days, I can’t have off days, I have to perform or someone is going to come in.’ At the same time, you don’t want guys looking over their shoulders.”

Purdue opens its season with a Big Ten game off the bat in a Thursday night nationally televised game against Northwestern on Aug. 30 in Ross-Ade Stadium.

Northwestern has a solid team, and beat Purdue 23-13 last season. The Boilermakers closed 2017 feeling good about how they played in Brohm’s first season. They finished 7-6.

Whether the Boilermakers’ confidence carries over to 2018 could hinge a bit on the opening game.

“That first game is vital for us,” Brohm said. “If you don’t win that one, some of the momentum is sucked out of you. It’ll be on us in just over a month. I think it’ll be a great game. …We have to make sure we’re ready to play.”

Brohm will have some tricks up his sleeve, some misdirection plays. He might even hold out on naming a starting quarterback until, say, opening night.

Or maybe he will play both quarterbacks that night. That’d be a left turn, and Brohm can’t take too many of those as he keeps Purdue moving forward in Year Two.