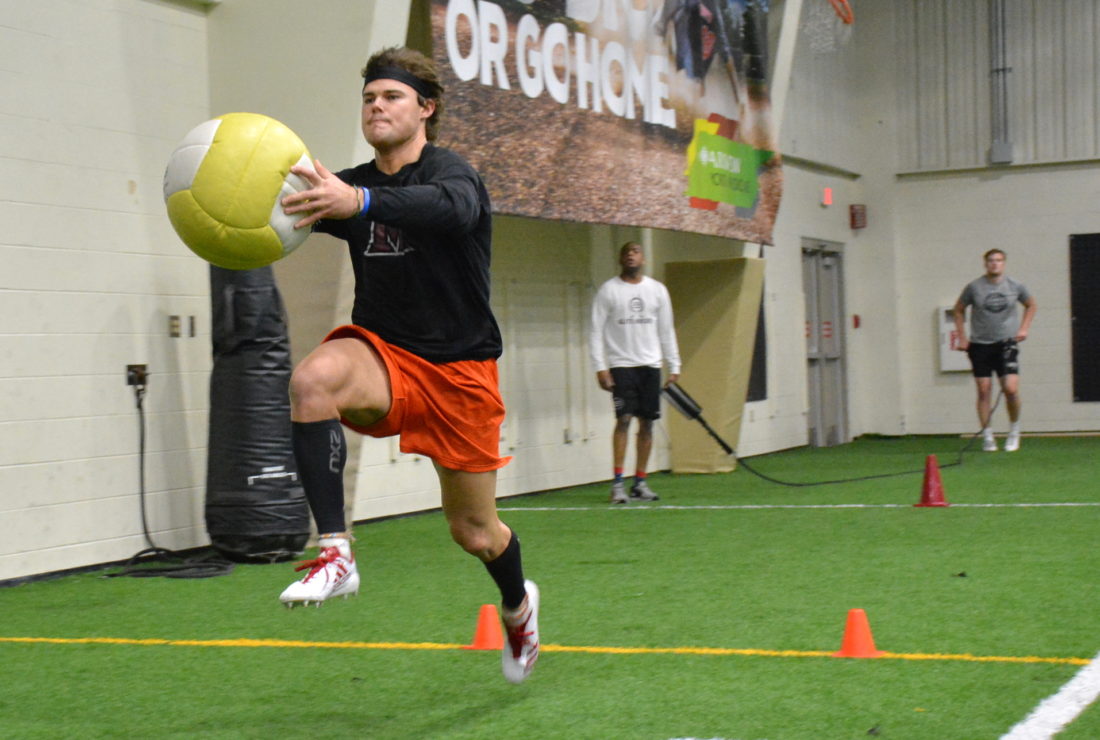 Michael Ledo has helped send a few of his AWP Sports-trained athletes to the NFL, but he believes Jared Murphy’s story is the “most marvelous” one of all.

“I sign in the morning and then I’m rolling,” Murphy said via text Wednesday night. “It’s very exciting. I’m very thankful for all the people I’ve had helping me through this process. I wouldn’t be here without all of them.”

His story is fairly incredible, as Murphy rose from a small, barely recruited Columbia City High School wide receiver to a long-shot NFL prospect out of Miami of Ohio. He earned an invite to the Bengals’ rookie minicamp, was released, spent the summer training and wondering if he’d ever get another chance, then received an invite to work out for the team earlier this week.

“When Jared is given an opportunity, he attacks it with every fiber that he’s made of as a person,” Ledo said. “He’s one of the toughest and hardest-working people I’ve met in my life.”

Murphy’s unlikely journey reunites him with two other athletes he has trained with at AWP – tight end Tyler Eifert and safety Jessie Bates III.

AWP, founded in Fort Wayne by Ledo and Bryan Bourcier 15 years ago, has five athletes in the NFL today, including brothers Jaylon and Rod Smith of the Dallas Cowboys, who recently held their annual Fort Wayne football camp.

Murphy kept training with AWP this summer after he was released, working intently with Dre Muhammad, director of athletic development/wide receiver specialist.

“This summer has been tough at times to keep training every day when I’m not officially on a team,” Murphy said. “All my family, friends and the whole AWP staff supporting me and believing in me is what kept me going. I couldn’t thank my parents, Michael Ledo, Dre and everyone at AWP enough. I’m excited to get going and to play football. I feel very prepared.”

If Murphy can stick with the Bengals, it will be the best story of the bunch, Ledo said.

“I remember when coach (Randy) Hudgins brought him to AWP and said he was a once in a decade athlete,” Ledo said. “He was 5-9, 155 pounds, a white kid playing wide receiver out of Columbia City, what’s the probability he’ll one day get an NFL opportunity?”

Murphy’s only initial college offers were from small college programs Saint Francis and Tiffin. He attended a Miami of Ohio camp, and had a hamstring issue which limited what he could do.

“The coaches called us the next day and said they were going to offer him,” Ledo said. “They said they saw how hard that kid fought. Most would have quit. Those coaches would go on later to say he was the toughest guy on the team.”

Murphy continued to maintain his conditioning and training throughout the summer after his brief inclusion in the Bengals rookie mini-camp, proving his devotion to push his opportunity as long as the door was even a crack open.

“His story is inspirational for all of us,” Ledo said. “I used to get really bothered when we first started AWP, with people saying we were giving people false hope. What’s false hope? What is that? Should we have told Jared he wasn’t going to make it?” Jared’s the kind of guy who just needs an opportunity.”

The chance to show what he can do in training camp is that perfect opportunity, Ledo said.